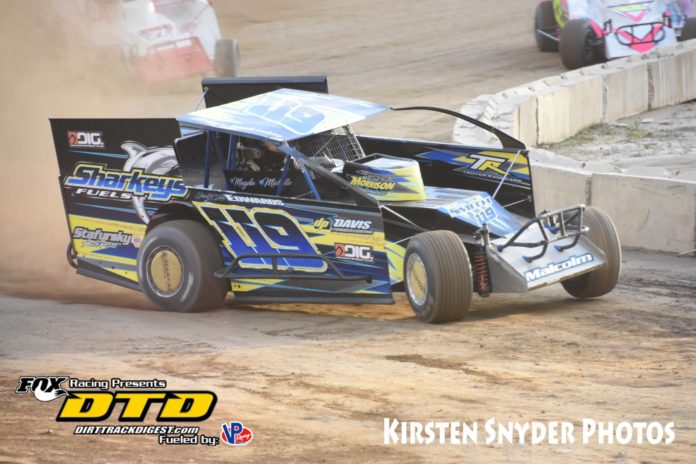 30 modifieds signed in and management decided to start them all. Heats would set the first feature. Mike Loney had the 17d on the charge at the drop of the green on the 20 lap feature. Brett Tonkin used any line he could to make his way up from 11th with Joey Grammes setting his sights on the leader by lap 5 from his 8th starting feature. Loney had a convincing win . Grammes and Brett Tonkin had a battle for second with Grammes coming out on top.

Since Loney was the winner, he pulled a chip out of the bucket and the top ten were then inverted. The modifieds then had a 10 minute fuel stop on pit road.

Marshall Hurd piloted the#58m to a 10th place finish in the first heat which put him on the pole for the second feature. Brian Malcolm could see clean air from his third place starting spot and by lap #1 led the modified field. Tensions were high as there was a lot on the line for the winner’s share. Hurd, Dan Creeden would cross the checkers behind Malcolm.
At this point, three drivers were in contention for the overall winner of the night. Brett Tonkin, starting 9th, Danny Creeden, starting 11th and Brian Malcom, starting 12th all had to make it to the front. 20 laps of hard core racing with Nick Pecko and Tonkin making the move on the final lap to bring home the win for the third feature. Brett will be representing Penn Can Speedway in the Fonda 200 and is now a guaranteed starter for the Aug. 18th Hot Summer Night race at his home track, Penn Can.

The junior division showcases the young talent we have at Penn Can. Liam Jackson, Josh Landers, Trevor Houghton and Gordon Smith learn something new each week. All four get faster each week. They also know you are a winner on and off the track. Liam was able to bring home a first place sticker with Landers, Houghton and Smith rounding out the field.

The 600cc modifieds had the top three in the same time zone for most of the race. Jared Green and the family owned #35 never opened the door to give Dana Davis any opportunity to go to victory lane. Jacob Waibel show consistent every week and will be in victory lane by the years end.

The 4 cylinder division had the race of the night. Josh Wilder would take the lead by lap #2 and had to keep 3 cars at bay until mid-race. On lap #6 Nick Kennedy made the pass on Jason Colwell for second and the battle would begin. Wilder knew he had Kennedy on his bumper on a lap #13 caution of the 20 lap feature. Both drivers knew each other’s racing style so Wilder knew Kennedy was waiting for the inch so he could take a mile. Both drivers respected each other’s abilities and had the finish of the night with Wilder taking the win over Kennedy.

A caution plagued 602 Crate Sportsman feature had the field shuffling except for AJ Miller. The driver out of New York hasn’t had much luck at Penn Can but look to turn that around. At the drop of the green, Miller took the top spot and never looked back. Mike Schane kept on the bumper of Miller but to no avail. AJ Miller would earn his first Penn Can trip to Victory lane.

The Factory Stocks would close out the night with Tommy Groover in familiar real estate taking the victory over Charlie Towner.

This Friday July 3rd Penn Can Speedway will celebrate our country’s birthday and the 65th year of racing with the biggest fireworks display. Our team led by DJ Dave plan a show that has never been seen at the track. We will also continue with giving back to the community. One dollar of every paid general admission will be donated to the Oakland Borough Emergency Food Pantry. Penn Can Speedway will then match the amount raised dollar for dollar. The Food Pantry and their tireless workers help all the residents of Susquehanna county. The number to reach them is 607-483-1571 to set up appointments or to get more info. Please consider making a donation if you cannot attend this week’s races.
All racetrack information can be found on our webpage penncanspeedway.net