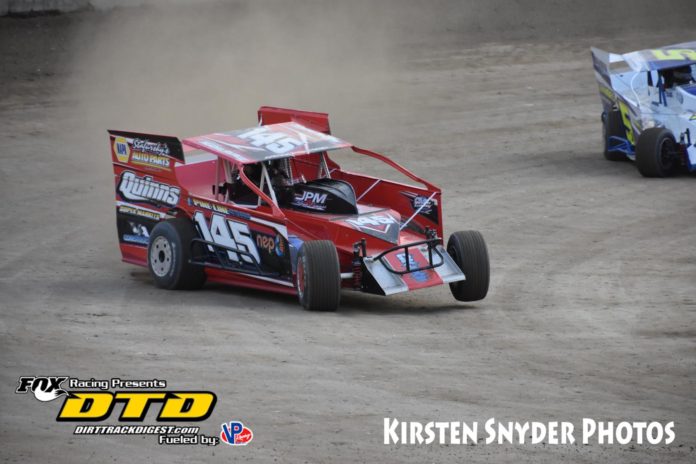 SUSQUEHANNA, PA — History was made on Monteforte Fireworks night. Penn Can Speedway hosted the biggest fireworks display July 3rd. Alecia Towner edged out Kevin McDonald by inches to take the factory stock divisional win. She is the first female winner in a weekly division at the 3/8 mile dirt oval.

Brandon Oleski made his first trip to victory lane in the 602 crate sportsman division. A distance of a foot over Tom Rudalavage had the spectators on their feet.

The Modified wouldn’t disappoint with Nick Petrilak throwing it all out there to try a take the spot from Alan Rudalavage. “Hollywood” Rudalavage would bring the #145 back to victory lane for the 2020 season. Alex Stanton piloted the #117 form a 15th starting spot to a well deserved 5th place finish. Byron Worthing recovered from a broken steering box last weekend to round out the top three. Richard Smith stalked the top three but crossed the line in the 4th position.

Trevor Houghton would lead the juniors to the checkered over Avery Decker and Marissa Lord. The juniors can be seen throughout the pits together and giving each other pointers. Lessons learned can be a lifetime of memories.

Brandon Oleski and his team represented the sportsman division in Victory lane for the first time in his career. Tom Rudalavage and Ray Leonard rounded out the top three.
Nick Kennedy bested a stout field of 28 4 cylinders. David Fox jr. has really stepped it up a notch running second and Josh Wilder rounding out the top ten.

Alecia Towner has seen the bad and the ugly side of racing. July 3rd, she saw the good. The factory stock driver comes from a long family line of racers. She has learned when to give and not to give. Never lifting after being run high coming out of turn 4, gave the fans a show. Towner edged out McDonald by inches. You never forget your first win and she now has something that no one can ever take away. HISTORY She will always be the first female to win a weekly division at Penn Can Speedway.

The 607 Wash Pro WRA sprints made an appearance. Steve Kyser, Cliff Pierce, Cliff Pierce and Brandon Clapperton were able to run a heat. Due to the show being called due to fog, they decided to use the heat as their feature giving the win to Kyser.

After a brief storm, Penn Can and their drivers held a moment of silence for two well respected local drivers. Tyler Vaughan and Pat Williams both passed away. To men who were to young and far too soon. Prayers to their families during this difficult time.

Monteforte Fireworks and the Pyro team of Penn Can put on a show that will be talked about for some time. DJ Dave set up victory lane and a musical tribute to our country as the fans enjoyed the show with some were on their feet by the end. At the end, most waited for the smoke to clear but fog had started to roll in. When 21 modifieds couldn’t keep the fog at bay, it was time to call the show. The street stocks and 600cc modifieds features will be rescheduled for a later date.

Penn Can Speedway is in its 65th year of racing and looks forward to continuing the traditions. You may keep updated on our Facebook page and also our website: penncanspeedway.net