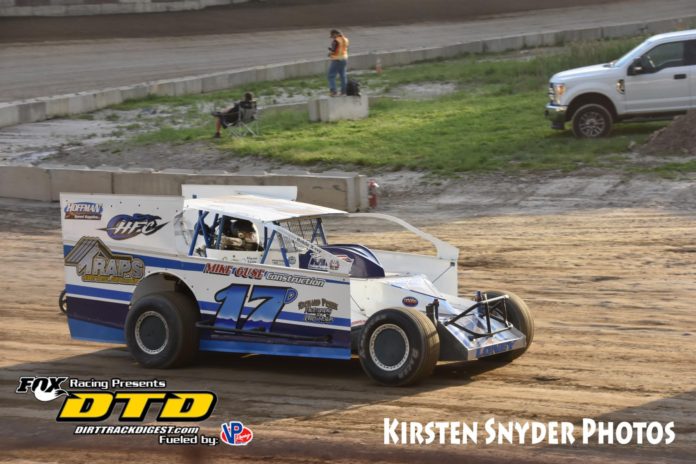 SUSQUEHANNA, PA – Thirty three year veteran Mike Loney used his experience Friday night to hit every restart perfectly and make his way into Penn Can Speedway victory lane. In a caution filled affair the Taylor, Pennsylvania driver was on his game all night. The 30 lap Insinger Performance and Sunoco Race Fuels modified feature was brought to the green by front row Mike Walsh and Nick Pecko with Walsh taking the early lead over the 26 car field

A lap 3 restart saw Pecko to the lead as Walsh got sideways up high making contact with the 72 of Nick Petrilak.  The two cars tangling at the front of the field spelled disaster as cars piled into the 9 car wreck. Triple 20 winner Butch Getz’s night was ended on the hook as all other cars were able to continue. The DNF will hurt Getz’s point hopes as he entered the night 5th in the standings. Mike Loney moved into first on the restart passing Pecko as both were pursued by Byron Worthing and Brian Malcolm. Malcolm and Worthing would swap the third spot  as the track’s multiple grooves allowed for a great back and forth battle.

Caution two came on lap 10, however, the top two remained consistent. Worthing was solidifying his grasp on third with Alex Tonkin moving into fourth, Brain Malcolm fifth, and point leader Brett Tonkin sixth. Loney hit the restart well and would lead the next nine circuits before another caution would slow the field. Lap 20 saw the top five remain consistent with Danny Creeden on a hard charge through the field making his way past Brett Tonkin for sixth. Darwin Green, Alan Rudalavage and Jamie Bedford would complete the top ten with ten laps to go.

A flurry of cautions led to restarts on laps twenty-three and twenty-four as Creeden took the fourth spot away from Alex Tonkin. Creeden’s night would end with the final caution as he got a rear flat on lap twenty-seven and did not return. The restart would see Loney pull away from the field with Pecko, Worthing, Brett Tonkin and Alex Tonkin rounding out the top 5. Heat races went to Walsh, Loney and Pecko.

Feature winner Mike Loney was fast to thank his crew, “I just drive the car and these guys put in all the work”. Loney, who has been doing this for 33 years, points out how much of a team effort racing is and makes it a family affair with his wife and daughter. Coming into this week’s race the Trapps 17D car held fourth place in the points standings with a few weeks remaining in the season. Loney states that the car was hooked up and that the win helped with the points, but that catching Brett Tonkin was going to be a challenge.

The 25 lap Insinger Performance sportsman feature saw Alan Komar and Ned Fitch come to the green on the front row, leading the pack of 23 hungry challengers. The first caution of the night for the sportsman came on lap three, where there were several changes in the top five. Coming off the restart, Brandon Oleski got the jump on Alan Komar. However, Komar was battling hard for second with Ray Leonard to his outside. Behind Komar and Leonard, traffic was getting heavy in the corners. Oleski led solid laps all the way up to lap 11 where another caution was thrown, upon the restart the 33+ got the jump and started pulling ahead. Oleski expanded his lead by putting lapped traffic between himself and Leonard in the last 7 laps, it didn’t last long as a caution was drawn with 2 to go for a car spun out in turn 2. Coming to a green, white, checkered, Oleski was in solid positioning to take the win in a position battle filled race. Heat wins went to Alan Komar, Brandon Oleski, and Mike Schane.

A loaded field of challengers couldn’t stop Lanson Albanese in the Insinger Performance Street Stock division as his Pops Automotive ride was able to work every lane on the track. Heat wins for Travis Brockner and Albanese would set the front row bringing the field to green as intense battles formed throughout the pack. Abe Ronanik held the inside while Albanese motored around the top racing for second, Doug Polhamus and  Dusty Decker were locked into the fight for fourth. Cautions on lap 8 and 9 allowed Brockner some breathing room as Albanese and Ronanik battled for the remaining podium spots. Tyler Yeagle slipped past Polhamus for third and began chasing down the two leaders. After a hard fought battle Brockner would surrender the lead to Albanese on lap 13. The field closed in on lapped traffic with two to go and Yeagle reeled in Brockner. He would run out of laps however as Albanese would take the checkers with Brockner and Yeagle side by side coming to the line, second went to Brockner. Doug Polhamus and Ronanik rounded out the top 5.

Tommy Groover continued his dominance of the Factory Stock division having multiple large leads in the 20 lap feature event. Leading the field to green were Groover and Stanley Matthews. Matthews would lead into turn one while the battle for third raged on. A lap 5 caution would see Groover leading over Mathews, Matt Millard and Alicia Towner. Contact on lap 6 sent  Towner for a spin and broke the front suspension, ending her night. Groover led the field back to green  with Millard and Nate Hill in pursuit before another caution for a blown tire. Groover took off on the restart as Millard and Hill battled the rest of the race for second. Matthews and Towner picked up heat wins. With Groover making  back to back visits to victory lane with his 7R machine. Groover had pointed out that the “Track was awesome and had a lot of bite, and it was the best it had been all year which allowed the car to be driven hard”. Groover had also thanked several of his sponsors, Denny Decker Logging, ZJF Welding and Fabricating, Red Barrel Carbs and Creekside Tent Rentals to name a few.

Dana Davis in the CK Contracting 138, extended his point lead over Jared Green by winning the 600cc Modified feature and leading every lap of the race. The two drivers were separated by a mere 15 points entering the night. When the green dropped Davis would lead Adam Mudge, Devon Green and Jake Waibel for lap 1. A lap five caution would see Waibel come to a stop in turn 4 and move Green into third with Casey Plummer in fourth. By halfway, Green had worked himself into second in front of Mudge, with Brett Gray up to fourth, and Plummer fifth. Davis would have to contend with lapped traffic on lap 14 but the top 5 would stay consistent to the finish.  Davis admitted the track had bite and was great for the smaller cars. He also stated that “the lack of cautions was a change of pace and helped in the win as well as going back to square one on the set-up”. The points leader also thanked sponsors Chris and Becky Kithcart and McDonald’s.

4 Cylinder action saw Jeff Sterling’s bad luck come to an end as he picked up the win over Rich Wagner and Nick Kennedy. Sterling and Phil Clapper would bring the field to green with Josh Wilder, Kennedy and David Fox Jr. in tow. By lap 5 Kennedy was up to second while Clapper fell out of the top 5. A lap six caution saw good battles in the top 5 before a lap 10 debris caution restacked the field. Dan Nichols and a hard charging Rich Wagner followed Sterling, Kennedy and Wilder to the green. By the time the checkers flew Wagner would make his way to second after a deep start in the field. Kennedy, Wilder and Nichols would complete the top 5.  As the Stone Brothers Auto sponsored ride made its way to victory lane, Sterling said “the track was smooth and awesome”, but he could feel Kennedy lurking back in second place. Sterling also states that he has “been battling all year and that this is the first full year racing. He also thanked his sponsors: Route 4 Moving Solutions, Overdrive Auto, Shiners and Sons, and Brewer Motorsports.

Frank Twing jr. won the junior division. The division has been learning more and more. The difference from the beginning of the year to know is incredible.

Another year of Penn Can’s annual Backpack night saw 151 donated backpacks for local community children and a great night of competitive racing. This upcoming Friday, the CRSA Sprints will be making a visit while the Modifieds will have the night off. Stay tuned to Penn Can’s website and social media pages this coming week for more information.

On August 28th, the Patriot Sprint Tour will be making a pit stop at Penn Can Speedway after a 13 year hiatus. You will feel the rumble and hear the roar with these bad boys.

Aug.29th will see the Renegade Monster Truck Tour take to the front stretch for a night of chills and thrills. Tickets for the truck event can be purchased online at monstersinthemountains.com  Track Party and Kids Fun Zone upgrade is available. Tickets can be purchased at the gate, but it is cheaper to buy online at this time.