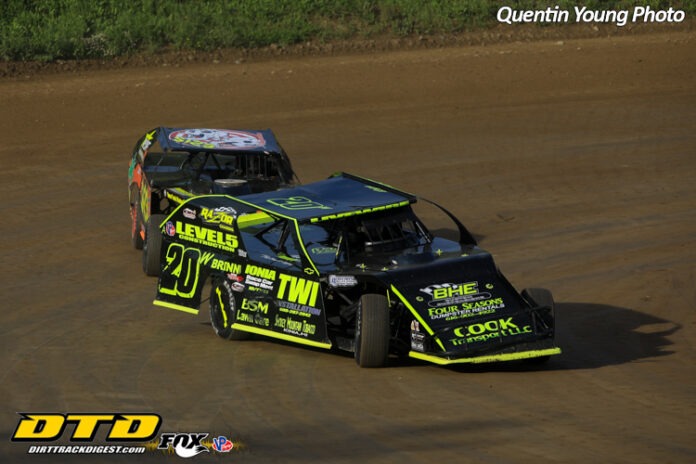 SUSQUEHANNA, PA – After a dismal weather forecast postponed the opening race of the 2021 season for the NY Penn IMCA Modified Series at Penn Can Speedway on Sunday, May 30th, the season was finally able to commence on Tuesday, June 1st. With the sun shining, 21 cars entered the pit area to kick off the inaugural season and the action didn’t disappoint. With a number of drivers battling for the top spot in th Sean Lias Memorial 37, it would be an outsider who made a 10 hour trip from Michigan taking home the $1,037 check.

After the conclusion of three heat races that saw Shawn Bruce, Keith Jack Lamphere and Chance Allen take wins in each of their races, it would be Brad Sites and Joe Novak leading the field to the green flag for the 37 lap feature. Although the first few laps would be slowed with yellow flags, once racing was on, the action was intense. Rapidly charging from his fifth starting position, Iona, MI native AJ Ward would quickly begin a battle with Sites for the lead, running the top while Sites powered the bottom. They would run side by side until contact on lap seven would send Sites spinning and Ward would be put to the back with him.

On the restart, Shawn Bruce and Brad Smith would set the pace, but a bold move by Rodney Morgan would take him to the lead off of turn two. As the laps clicked off, Morgan would continue to lead with Bruce hot on his heels as the middle portion of the race would be riddled with cautions, including a red flag for a pileup on the backstretch that ended the day for three competitors on lap 14.

As the caution would wave, Ward and Sites were putting their skills to the test, bobbing and weaving their way through traffic and spun race cars. With 10 laps to go, Morgan would rapidly slow off of turn four with a flat tire, stacking up the field behind him. The end result erase his chances of a big payday and hand the lead back to Bruce.

With the field restacked, Bruce would continue to lead, but Ward and Sites would be in hot pursuit. As the laps wound down to the finish, Ward would use the top side of Bruce in turn three and four to take the top spot, checking out and scoring the win. Bruce would follow him across the line, while Sites would run out of laps getting to the front and round out the podium.

“I was watching the Sportsman feature and it didn’t really seem like they were getting good drive on the bottom. I set it up for the top because I figured everybody’s going to go to the bottom,” Ward exclaimed in victory lane. “Jumped out front early, took the lead, and then we did a couple slide jobs back and forth. Then me and the 115 (Sites) got together getting into one which sucks because it sent both of us to the tail. We rallied back up just being patient and smart, running through the back of the pack on the way up being it was such a long race. We broke a left rear shock about halfway through and it was crazy different feeling entering. As soon as I let off the gas it wanted to slam right down and spin me out so I kinda had to relearn how to drive the car. Just kept picking them off on the top, nobody was running up there and I didn’t really come this far to follow the leader on the bottom, so I made the top work. Just good, hard racing. So, so happy to pull it off.”

Following behind Ward to the checkered flag was veteran Shawn Bruce who was happy to walk out with a runner-up finish.

“Boy, it was an up and down battle. The car got better on long runs and then we had a quite a few cautions in there. Just didn’t have anything for AJ at the end when he got on the top side,” said Bruce. “I would get up there and the car would skate a lot so I just stayed down on the bottom and figured I’d be real happy with second. I got beat by the master. That’s all I can say. This guy’s real hot out in Michigan. We were out there and raced against him a few weeks ago and he won that show. One of these days we’re gonna get him.”

Rounding out the top three was Brad Sites. After leading early, contact with Ward would put him to the back, but he was able to drive back through traffic to a third place run. After the race, he was still not happy about the events that occurred on lap seven.

“Well, I started on the pole. Thought I might have some good luck. Seven laps in and AJ Ward spun me out coming into the corner and had to start from the rear. Came back up to third and that’s where I finished,” explained Sites.

The second race for the NY Penn IMCA Modified Series will be at The Hill Speedway in Monroe, PA on Friday, June 4th. Gates open at 5:00 est., with practice at 6:30 and racing at 7:00. 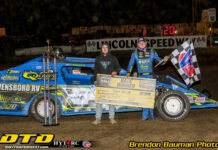