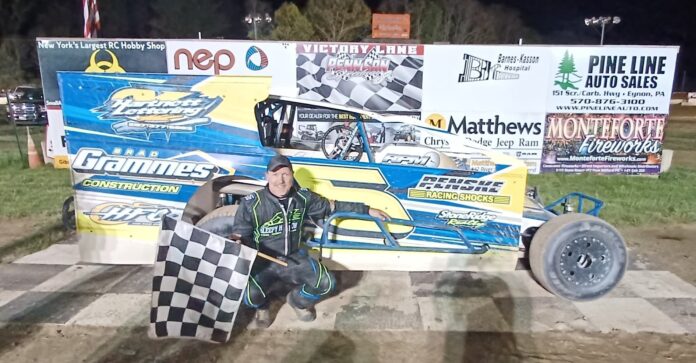 SUSQUEHANNA, PA – After a few bouts with Lady Luck, Kevin Hartnett broke his streak and returned to Penn Can speedway victory lane. Alan Rudalavage and Darwin Greene Sr, set the pace as the modified field charged to the green. Rudalavage took the early lead as the Stafursky Paving team of Dan Vauter and Brett Tonkin went door to door for second. Tonkin would settle into the third spot as the first yellow halted the action with two laps completed. With Brian Malcolm, Casey Plummer, Nick Petrilak, and Mike Nagel Sr. rejoined at the tail, Rudalavadge prepared for the restart. Rudalavadge elected for the inside powering away down the frontstretch before getting hooked on Greene’s bumper in turn one collecting Plummer, Nick Rochinski, Art Bray, Nagel and George Kostelansky.

The third time was the charm as Vauter and Tonkin brought the field back to green. Vauter powered ahead down the backstretch working the outside momentum as Hatnett tried the outside of Alex Stanton for third. With the field working lap five Petrilak was flying back to the front challenging Mike Loney for fifth. At the point, Vaunter had locked down the lead with Hartnett using the inside to slide past Tonkin. Rochinski followed Petrilak through the field moving past Loney and Malcolm on lap seven moving himself into the top five. The battle for the lead was on however as Hartnett took a look inside Vauter as the duo drag raced down the front stretch coming up on the lapped car of Travis Brockner. Brockner allowed the leaders plenty of room to work, hugging the inside tires. Vauter shot around the outside as Hartnett slowed up, patiently waiting to clear the slower car as Vauter began to work on Bray.

With eleven laps complete Vauter trapped Hartnett behind Bray, taking a two car length lead as Hartnett moved the slower car out of his path. With Rudalavage slow on the backstretch the lap thirteen yellow cleared the path for the leaders. Vauter put Hartnett to his inside on the restart and by the time the lap was complete Hartnett had taken the lead. Three more yellows would ensue with the running order of Hartnett, Vauter, Rochinski, Stanton, Petrilak, Greene, Kostelansky, Bray and Brockner left on the surface for the final fifteen laps. Hartnett rocketed away lapping almost half of the remaining field in the closing laps, taking the checkered flag with over a full straight away lead. Vauter, Rochinski, Tonkin and Stanton would follow him across the line rounding out the top five.

Feature winner Kevin Hartnett has battled some tough luck so far this season and faced motor issues during his heat. He and the crew made some wholesale changes to the carburetor and in some other areas for the feature but it only got worse. Brad Grammes puts a rocket under Kevin week in and week out and the driver is confident they will be good to go for next weekend. With the string of green flag laps at the end Hartnett said everyone has a right to race and when the lapped cars are battling for spots of their own sometimes it’s just best to be patient as the leader. Kevin would like to thank the Grammes Family, RPM Race Engines, Penske Shocks, Stone Ridge Realty, Big Creek Concrete, Grammes Construction, Higfab chassis, and Hartnett lettering.