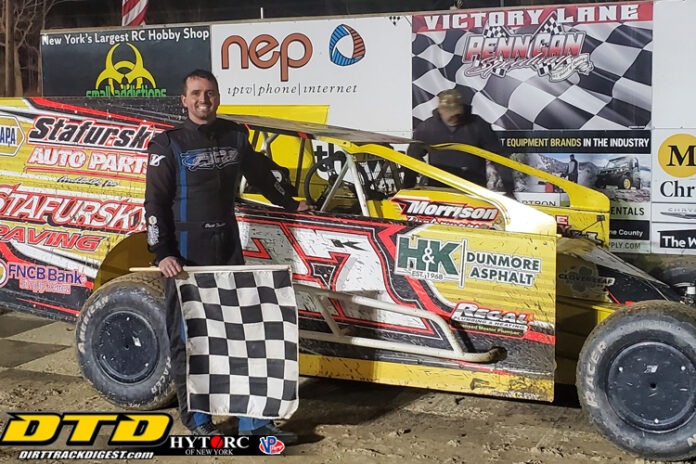 SUSQUEHANNA, PA – It was an overcast night at the Penn Can speedway but don’t let the cool breeze fool you, the action on the track was hot and heavy. With 6 divisions on the card including a IMCA points race, a healthy serving of side by side action was on the menu. Penn Can closed out the month of July in style, as fans began the month with fireworks in the air and ended it with fireworks on the track.

Travis Brockner and Darwin Greene Sr led the way as the Stafursky paving modifieds took the green flag. Brockner grabbed the lead as Mike Ward quickly came to a stop at the top of turn two bringing out the yellow. Greene would get the better of Brockner on the second try, carrying the outside momentum to take the lead as the pair headed for the backstretch. Brett Tonkin found the inside of Bud Phillips to nab the third spot on lap 5. Teammate Dan Vauter would follow Tonkin as Phillips tried to defend the bottom. The pair would make contact, shuffling Phillips out of the groove and letting Kevin Hartnett and Brian Malcolm slip by while Phillips recovered. Tonkin and Vauter next went after Brockner, moving the pole sitter back to sixth as Hartnett and Malcolm also went by on lap 9.

Tonkin reeled in Greene over the next two laps, with the pair racing door to door as Greene held on through lap 11. Tonkin would be too much however, becoming the leader on lap 12 with a power move out of turn four. Point leader Hartnett kept gaining over Vauter, taking away the third spot as they dashed down the front stretch. Both drivers would advance past Greene for podium spots. With half the laps completed Tonkin began to work lapped traffic, slowing his pace slightly as Hartnett began to reel him in like a fisherman after a prize haul. As they worked lap 20 Alan Rudalavage cracked the top 5 moving past Greene in as Rudalavage’s string of bad luck cleared up. Nick Petrilak worked the inside line to take ninth from Phillips as just ahead Brockner and Alex Tonkin dueled for seventh. That battle would lead to the second caution as the pair made contact in turns three and four, sending Tonkin around with a flat and collecting Mike Loney, Alex Stanton and Phllips. Hartnett struck it well on the restart, as he and Tonkin came back to the line side by side, Tonkin holding the lead by a half car length. The tide would turn one final time however, as Doug Smith ended up facing the wrong direction and set up a four lap dash to the finish. Tonkin rocketed away on the restart, never allowing Hartnett to throw the Hail Mary and taking the checkers with Vauter, Malcolm and Rudalavage completing the top 5.

Feature winner Brett Tonkin has said in the past that lapped traffic can play a major part in winning or losing a race. After hitting lapped traffic around halfway Tonkin had to make his moves carefully, while knowing there were some really fast cars behind him, chomping at the bit to take away the lead. In the closing laps Tonkin remarked he could feel Hartnett to the outside and was surprised that the top held up so strongly. With the laps winding down Brett felt he had to move up off the bottom, instead rolling the middle to break the momentum that Hartnett could hold on the top. Early on Brett spoke highly of his battle with Darwin Greene Sr. mentioning it was a clean race, in a fight for the bottom lane early on. With the feature winner stickers begging to pile up Brett would like to thank car owners Dave and BJ Stafursky, Stafursky Paving, Stafursky Auto Parts. Morrison Performance, FNCB Bank, H&K Dunmore Asphalt, and Regal Plumbing and Heating. Additionally, his brother Alex for all the work he puts into the car week after week and Jimmy Witko.