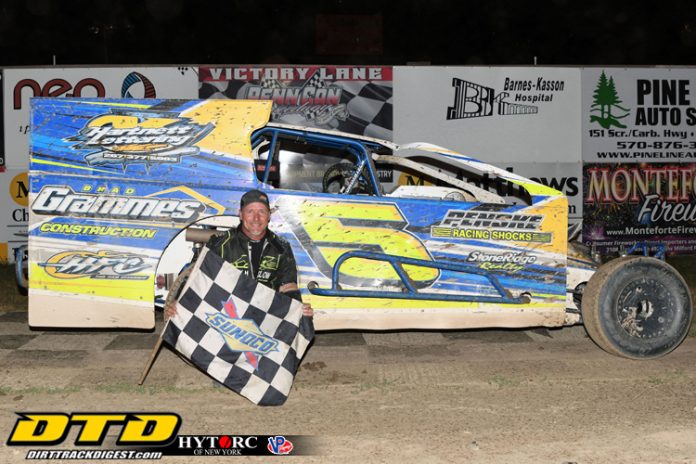 SUSQUEHANNA, PA-The 2022 regular season came to a close for the Penn Can speedway as Kevin Hartnett collected the checkered flag to cap off a dominant season. With 87 cars signed into the pits and a little cooperation from Mother Nature the track looked great. Coming into the night none of the 5 division championships were guaranteed, ensuring a thrilling night of action!

Mike Nagel Sr. and Travis Brockner charged toward the green flag as Brockner moved into the top spot on the opening lap. Bud Phillips quickly moved up to the top side of Nagel to grab second with one lap complete. Kenny Hildebrandt would grab a hold of the yuke tire in turn one to bring out the early yellow. As Brockner elected for the inside, Phillips got the better launch to take away the lead. Brett Tonkin would get the short end of the stick on the next lap as he ended up facing the wrong direction in turn 4 leading to a second yellow. As Phillips once again pulled away, Brian Malcolm started to work his way forward getting past both Alex Stanton and Nagel to move into fourth. By lap 6 however, Hartnett had found the front, taking the second spot away from Brockner and setting his sights on Phillips. Doug Smith’s night would end a little earlier than he and his team had hoped when it slowed down the backstretch before exiting on the hook with 8 laps completed.

As Phillips lined up with Hartnett to his inside, the field once again took the green. The pair would run door to door for the next few laps as Phillips fought valiantly to keep the champion behind him. By lap 12 Hartnett would prove to be too much as he took the lead away and began to open up a gap, catching lapped traffic on lap 16. With only 10 laps remaining, Brandon Fritsch ended up pointing the wrong direction in turn three to bring out the final yellow of the night. As Hartnett once again pulled away from the field, the best battle on the track came for the fourth spot as Nick Petrilak Tonkin waged war. Sporting his throwback 2x to honor his brother, Nick would lose out on the spot as the checkers flew. Hartnett collected the sweep for the night, grabbing checkers on his heat, feature and the points championship. Phillips, Malcolm, Tonkin and Petrilak would go on to complete the top 5.

2022 Track Champion Kevin Hartnett is a seasoned veteran of the sport and was quick to thank the Grammes family and Brad Grammes for putting him in Victory Lane this year. With multiple checkered flags across the season, Kevin mentioned he and the crew overcame many little bumps in the road throughout the season but kept continuing to push through. With King of the Can quickly approaching Grammes will be a favorite entering the event, as he carries his Championship momentum forward. He would like to thank RPM Race Engines, Penske Shocks, Stone Ridge Realty, Big Creek Concrete, Grammes Construction, Higfab chassis, and Hartnett lettering.

With our season wrapping up, next week’s racing action will include a King of the Can qualifier for all weekly divisions. That will lead up to the biggest event on the speedway calendar as September 16th welcomes the 602 Crate Sportsman, Factory Stocks, Mike Petrilak Memorial for the Street Stocks, Modified match races and SCDRA 4 Cylinders. September 17th will feature the mighty modifieds, CRSA Sprint Cars, Xcell 600cc Modified Tour and the NYPENN IMCA Series.