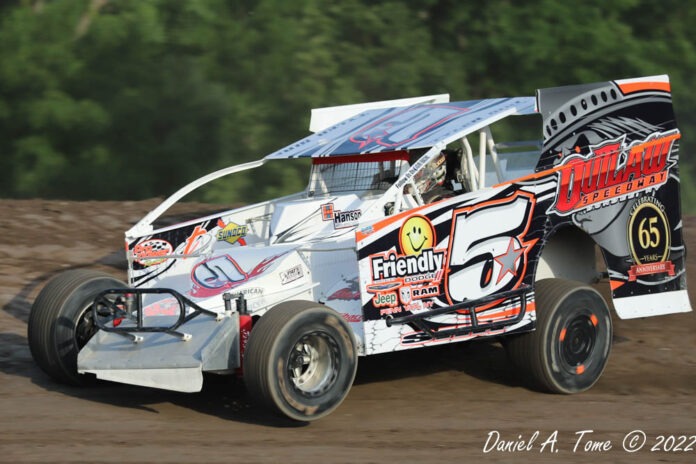 SUSQUEHANNA, PA – With the Golden Throne placed in victory lane, Tyler Siri and Brandon Walters brought the Stafursky Paving Modifieds to the green flag for the main event of the weekend. As Siri charged into turn one disaster struck behind him with a jingle in the top 5 leading to the entire field coming to a halt in turn one. The second try went better as Siri pulled ahead with Brett Tonkin and Justin Holland battling for third. Holland would get in the loose dirt up top as he slid back to seventh. Kevin Hartnett would make moves early on, sliding in front of Alex Tonkin to take the fourth spot away. Travis Brockner has had an up and down season after switching from Street Stocks to Modifieds this year and ended his season on a sour note, with his car sitting on its side as part of a lap 4 pile up on the backstretch. The incident would eliminate Corey Costa and Eric Leet, while JR Fulper continued on.

With 4 laps completed the field found its rhythm and settled in for a 31 lap green flag run. The battle for third was on as Alex Tonkin worked the inside of Walters, taking the final podium spot on lap 6. By lap 14 Siri had reached the tail of the field to lap Fulper. Fulper would retire to the infield on the following lap while Jimmy Zacharias and Hartnett dueled for seventh. Hartnett kept the spot as Siri continued to lap cars and extend his lead over Brett Tonkin. With 25 laps complete, Holland and Walters were getting feisty in their battle for fourth, rubbing rails down the front stretch as Holland claimed the spot. Holland would work Alex Tonkin up until the lap 35 fuel stop that would regroup the field, erasing Siri’s full straightaway lead. A few drivers would elect to head pitside under the red and would restart at the tail. Brett Tonkin would suffer mechanical issues under the red and was pushed pit side with no return.

As Siri led the way back to green, Holland went back to work on Alex Tonkin getting the inside through turns one and two and completing the pass down the backstretch. After pitting during the red, Rusty Smith and Zacharias were beginning their march back through the field. The pair would move into the top 10 on lap 46 as the field began to string out once again. As Siri worked lapped traffic Holland began to close the gap, narrowing to within five car lengths on lap 53. Just as Holland reached the back bumper of Siri however, Dan Vauter went around on the frontstretch. With a ten lap dash setup to the finish Siri would pull away as Holland’s machine loosened up. Zacharias would work all sides of Hartnett to take the seventh spot with Smith moving Hartnett to ninth as the popsicle sticks signaled two to go for Siri. With no challenge coming over the final two laps, Siri collected his first King of the Can crown as Holland, Walters, Alex Tonkin and Alan Barker rounded out the top 5.

After leading from flag to flag, Tyler Siri said it feels awesome to finally have their new Teo figured out. With a smooth track throughout the race, Siri said there was still some grip running after the sprint cars. His ride tightened up towards the end of the feature, and it became about protecting the bottom and really working the throttle Siri stated. While lapped traffic is always a part of endurance races for modifieds, it didn’t bother Siri as he stayed focused on finding the holes and was signaled that he had a comfortable lead. Tyler would like to thank Friendly Chrysler Dodge Jeep, Outlaw Speedway, Teo Pro Car, Pro Power, Integra Shocks, Hanson Aggregate and his family and supporters.