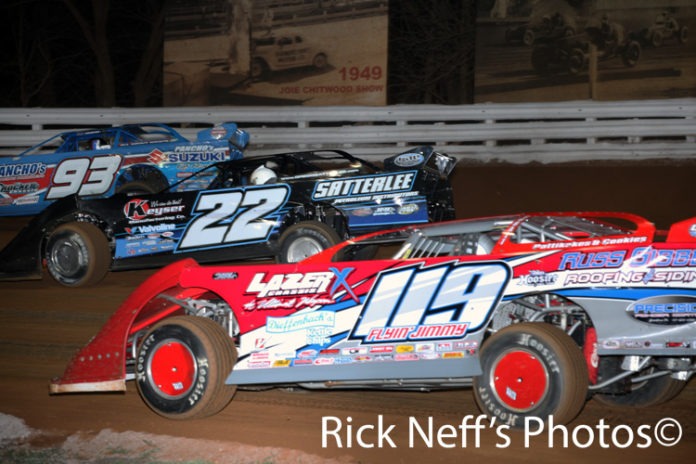 In addition to the posted prize money, the Super Late Model winner each night will also receive a guaranteed starting spot in the tracks respective Ernie D’s Appalachian Mountain Speedweek Show during the 9th annual event this June. Being the guaranteed starter for the track entitles the team a little piece of mind come June in the hotly contested Speedweek races. Should a problem arise in the qualifying events during the Speedweek race, the Guaranteed Starter will be added to the field giving that team a minimum of the $400 start money for the Speedweek event.

On top of that Williams Grove, Port Royal and the Appalachian Mountain Speedweek will join together to offer a bonus $1,000 point fund for this 2 race weekend to be distributed among the Top 3 in combined points. Additionally, long time series sponsor Hoosier Tire Mid-Atlantic will give out a certificate for new tire at each event to a randomly drawn top 10 finisher.

Not wanting to forget the fans, DirtonDirt.com will provide a certificate for a free subscription to their highly-praised Dirt Late Model news site which features Late Models 24 hours a day, 7 days a week with all the latest industry news, results, photos, exclusive stories and videos updated daily.

“We wanted to do something with Williams Grove and Speedweek” stated Port Royal Speedway promoter, Steve O’Neal. “Justin Loh (Williams Grove General Manager), Kurt Smith (Speedweek Co-Promoter) and I wanted to work together early in the season when Williams Grove runs their few Super Late Model Shows. I think we have put together a really nice program for just 2 races.
We wanted to give the drivers a little something extra, get the fans out early in the season and get a jump on the big year we are all hoping to have. We are really grateful that HTMA (Bob Wirts) and Dirt on Dirt (Michael Rigsby) jumped in to sweeten the deal even more” added, O’Neal who has bumped up the winner’s share to $3,000 for the “Guaranteed Starter” weekend finale.


“This should be a really awesome double header weekend, having the Super Late models and the 410 Sprints on the same card on back to back nights is a dirt track fans dream” said Speedweek Co-Promoter, Kurt Smith. “Justin (Loh) and Steve (O’Neal) have wanted to work together on this for a couple of years but with Williams Grove getting their Super Late Model shows in early as not to interfere with Bedford Speedway, the timing just never had worked out prior to this year. As long as we can get Mother Nature to play along, this will be a fun weekend and a must see double header for the fans” added Smith.