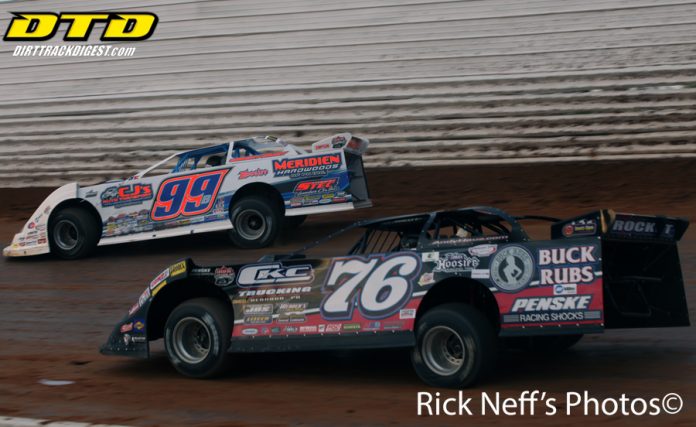 CONCORD, NC – Only two drivers remain from the World of Outlaws Craftsman® Late Model Series original Dirty Dozen formed in 2004: Rick Eckert and Chub Frank. For 14 years the pair has traveled countless of miles around the nation visiting different tracks with the Series. On August 19 and 20 the Series will return to their homestate of Pennsylvania for the second time this season for back-to-back races at Port Royal Speedway and Eriez Speedway.
“We usually have no help out on the road, so it is nice that when we race near home we will actually have a little more help than usual,” said Eckert. “It’s only about an hour and 10 minutes from my house, so that is the closest race we will run near home with the Series.”
Eckert only has one full-time crew member this season: Robert Miller. To put that into perspective, current points leader Brandon Sheppard has three full-time crew members (Danny White, Austin Hargrove, and Joel Rogers), as well as team owner and President of Rocket Chassis Mark Richards.
Not only is Eckert looking forward to having more crew members at the event, he is also looking forward to heading back to the home of one of his early victories this season. In April, while running with the Lucas Oil Late Model Series, Eckert wheeled his way to his fourth career win at Port Royal Speedway. During his Victory Lane interview, Eckert praised the excellent track conditions at the half-mile dirt oval.
“It was an awesome race track tonight. You could run low, middle, or high,” said Eckert after his victory. “This facility has turned out to be one of the best in the nation. It’s one of the best kept secrets out there … This is why people keep coming back here. Not only is the facility nice, but they run an efficient program, and the track is raceable from start to finish the entire night. All I can say is that things are going to keep getting better and better for this place.”
The Series will hit the track at Port Royal on August 19 for the first time in 10 years. The last Series race at the half-mile was in 2008, when Clint Smith took the checkers over Frank and Steve Francis.
The following night the Series will head 220 miles northwest to the very track that Frank planted his roots in- Eriez Speedway.
“My dad and my uncle and two other guys built Stateline [Speedway] and Eriez [Speedway] back in the 50s, and they owned them until the early 80s; then they sold them,” said Frank. “We raced there, but hell, I grew up at both tracks doing whatever- painting, garbage picking, water truck. It didn’t matter what it was; whatever maintenance needed to be done I helped out. That’s also how I ended up out on the road. The promoter at the time and I didn’t see eye-to-eye, and he told me if I didn’t like it, I could leave; and that’s exactly what I did. I raced with STARS, and then I joined the Outlaws when they first started.”
Frank started racing street stocks back in 1978 before moving up the racing ladder to eventually sit behind the wheel of a Late Model. Frank developed into a dominant Late Model driver around his hometown, winning the Stateline and Eriez circuit Limited Late Model titles from 1983-1987 and capturing the Stateline Super Late Model championship in 1989 and 1990. Frank now sits as one of the most decorated drivers in the industry.
The 2017 visit to Eriez Speedway is the Series’ ninth appearance at the track. The Series has visited the track consecutively since 2007, with the exception of 2013 and 2014.
For more information on the World of Outlaws Craftsman Late Model Series event at Port Royal Speedway on August 19 visit the track website. For more information on the upcoming event at Eriez Speedway visit the Eriez website.