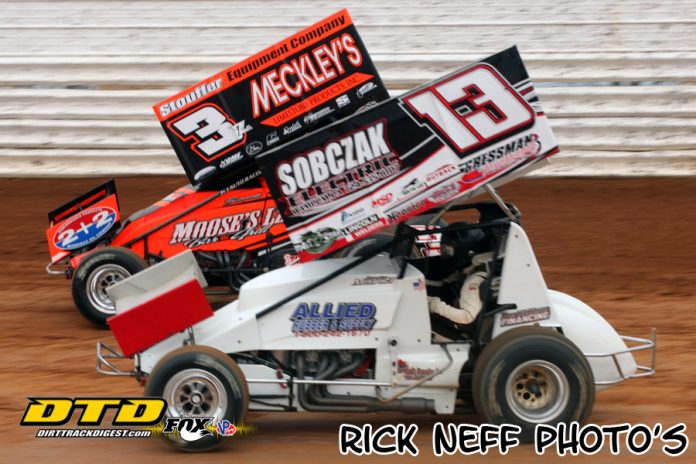 Winners on the night were Brock Zearfoss in 410s, Kyle Smith in 305s and Lucas Wolfe in URC for what was a photo finish.

Greg Hodnett and Brock Zearfoss earned the front row for the 25-lap 410 sprint car main event and when the green flag came out, the pair immediately battled for control in the first corner.

Hodnett entered high in the turn but Zearfoss entered even higher and although Hodnett beat him to the center of the corner, Zearfoss beat him off of the turn with a sweep around the outside.


With eight laps to go, Hodnett had caught Zearfoss for the lead as a three-car battle for third raged between Steve Buckwalter, Logan Wagner and Lucas Wolfe.

And with five to go, the race for third had caught the race for the lead and the finish was setting up to be a wild one when the only caution of the race came out with just three laps to go.

The restart proved anticlimactic as Zearfoss jetted away to pick up the $4,000 win over Hodnett by 1.705 seconds.

However the race for third battled to the finish with both Wolfe and Wagner getting by Buckwalter for the spot while Dylan Cisney raced home fifth.

The 25-lap URC main saw polesitter Lucas Wolfe blast into the lead over Josh Weller when action began in what would turn out to be a non-stop affair that came right down to the wire.

Trey Starks started third in the field and got by Weller for second on the third circuit before giving chase of leader Wolfe.

Starks seemed stagnant for a while but eventually he was able to narrow the leader’s advantage as Wolfe worked through heavy lapped traffic.

Meanwhile, fifth starter Mark Smith had driven up to third with 10 laps to go as he began to set a blistering pace around the oval.

It took six laps to do it but Smith caught Starks for second and drove by for the spot with four to go before driving down the leader.

And over the final two laps, Smith and Wolfe exchanged the lead at least six times with Wolfe getting the better of Smith every time to reclaim control.

Smith’s last effort came in the third and fourth turns as the pair headed for the checkers as he blasted across the middle of the turns and put himself at the front, taking Wolfe’s line away.

At that point, Wolfe turned the car off the cushion and raced up the inside of Smith as the pair bore down on the finish line in a drag race to the finish.

The finish was so close that most in attendance had to wait for a check of the electronic timing system to determine who had actually taken the victory.

In the end, Wolfe scored the victory by .004 seconds, which was a margin that was nearly impossible to detect with the naked eye.

Heats went to Zearfoss, Starks and Smith with the consolation race going to Derek Locke.

Dylan Shatzer led the first four laps of the 18-lap 305 sprint main before Christian Rumsey drove by for the lead.

A restart with seven laps completed placed fifth starter Kyle Smith on Rumsey’s tail and Smith took the lead from Rumsey in the first and second turns when action resumed.

Jeff Miller motored into second with two laps to go but ran out of time to challenge Smith for the win.

Darren Miller was third followed by Rumsey and Shatzer. 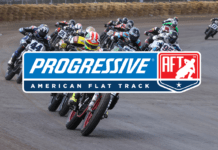