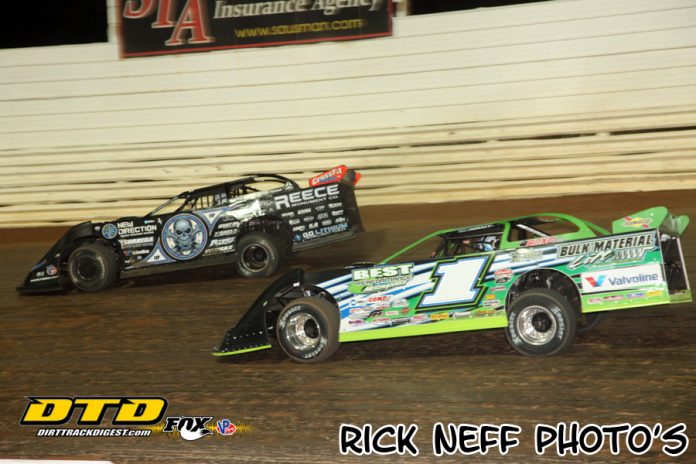 Jimmy Owens led the first lap until Bloomquist, who started fourth on the grid, wrestled the lead away from him on the second circuit. Owens maintained the second spot until a coil spring broke on lap 17, ending his night. McCreadie picked up the second spot as he and Richards then dueled it out for the runner-up position.

The final caution of the race bunched the field up with 2 laps remaining. Richards tried valiantly in the green-white-checker finish, but Bloomquist was just too strong as he held on for his first career win at Port Royal Speedway. “We have run really well since Florida. Last weekend, we had a win and a second-place finish, and this weekend a second and a win. The car, the engine, the shocks, everything is working well,” said the 54-year-old Bloomquist in Lucas Oil Victory Lane.

“We had good rotation, it carried around the high-line tonight. The car could work low, the middle, or high. I tried to run up high in three and four because my momentum would be really good off the turn-4 corner. When we had to go to the bottom to pass lapped cars we could. Thanks to Randy Sweet and everybody at Sweet Manufacturing.”

“This really is a great race track. We hadn’t had a victory here, but I really enjoyed running on it. There were some crumbs on the track early. It has a lot of character, and you really have to be up on the wheel to drive this place. I think I figured out the high-line pretty good tonight.”

Richards maintains second-place in the points with his runner-up finish. “We had a great car tonight; those restarts weren’t very good for us, but we recovered and gave the Best Performance Team a good finish tonight. Last night at Hagerstown we had a rough night. We worked on some things today. If it could have gone caution free it might have been a different story. This place is so fun to drive on. Thanks to all the fans for coming out tonight. I wish we could race here tomorrow.”

It was a hard-fought third-place finish for Pearson. “Josh and I had a good race for second there at the end. McCreadie and him ran side-by-side there for a long-time. Thanks to everybody here at Port Royal and thanks to all the fans who came out on a Sunday night to watch us race. This is a heck of a race track, wish we could do a two-day show here.”
The winner’s Sweet-Bloomquist Chassis is powered by an Andy Durham Racing Engine and sponsored by: New Direction Ag, Reece Monument Company, Sweet Manufacturing, Sorbera Chiropractic, Horton Coal, Penske Shocks, Valvoline, Crossfit by Overton, CatSpot, Petroff Towing, and VP Fuels.