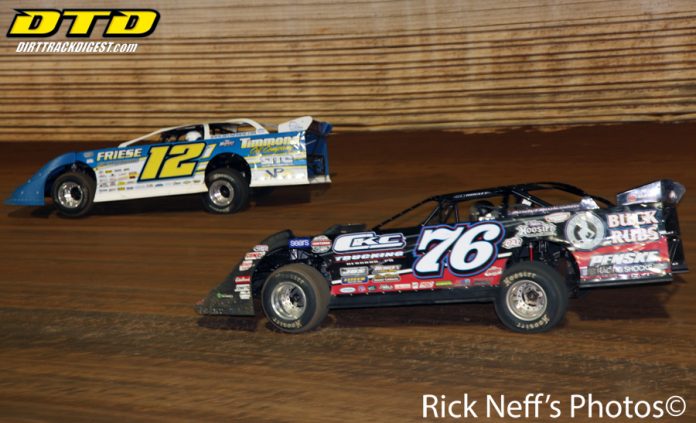 CONCORD, NC – While the World of Outlaws Craftsman® Late Model Series is in the midst of the final extended road trip of the season, the cars and stars of the Series have an eye on a key visit to the eastern United States. On Thursday, August 16, after visiting Georgetown Speedway (DE) for the second time ever, the most powerful stock cars in the world head to the Keystone State of Pennsylvania for three races in three days. The teams will travel just over 450 miles and visit four different race tracks in four days.

The Pennsylvania Trifecta starts on Friday, August 17 at the site of the first-ever race in World of Outlaws Craftsman Late Model Series history back in 1988, Williams Grove Speedway, located southwest of Harrisburg in Mechanicsburg, PA. Widely known as one of the top Sprint Car tracks in the country, the sprawling half-mile has seen the World of Outlaws Late Models just once, and it was 30 years ago in that historic inaugural race back on April 22, 1988. Legendary five-time NASCAR Weekly Series National Champion Larry Phillips of Springfield, MO won that first event.

“When we saw that they would be celebrating their 30-year anniversary in 2018 and realized the history of their Series and our track, we felt it was only right to bring them back for our fans,” stated Justin Loh, Williams Grove Speedway General Manager. “It’s been 30 years since the last race here, but now is as good of a time as any to hold another event, and we are really excited about this race. Fans in Central PA, especially at Williams Grove Speedway, are traditionally very Sprint Car oriented. We’re excited to bring in a Series like the World of Outlaws Craftsman Late Model Series and give the fans a little something different for the 2018 racing season,” he added.

After Williams Grove, the Outlaws head 60 miles northwest to another historic half-mile known for its Sprint Car heritage, Port Royal Speedway, located southeast from Penn State University (State College, PA) in Port Royal, PA. On Saturday, August 18 the Outlaws make their fourth-ever appearance there. Defending Series Champion Brandon Sheppard grabbed the win in the last event there in 2017. It had been eight years since the Series visited back in 2009, when Clint Smith scored the victory. During the Series inaugural race at Port Royal, in 2007, eventual three-time Series Champion Darrell Lanigan took the checkers.

Finally, to wrap up the weekend, the Outlaws take a four-hours-plus trip northwest, just east of the Ohio / Pennsylvania state line and along the shores of Lake Erie, to the fast 3/8-mile of Eriez Speedway in Erie, PA for the tenth-ever race at the track.

The trend at Eriez is that a driver either needs to be a former Series Champion or be on that road towards an eventual title. Sheppard won the Series’ last event there in 2017 on his way to that championship. Four-time Series Champion Josh Richards leads all drivers in the wins category at the track. Lanigan has two wins, while 2007 Series Champion Steve Francis and 2011 Series Champion Rick Eckert have single triumphs.

The Series won’t be done in Pennsylvania in 2018 after the Pennsylvania Trifecta, however. On Saturday, September 22, the 18th annual National Open will close out the PA portion of the schedule at another big half-mile, Selinsgrove Speedway, located north of Hershey in Selinsgrove, PA. Twelve-time Track Champion Jeff Rine defended his home track’s honor with his first career World of Outlaws win in the last race there in 2017. The Danville, PA driver is also a five-time winner of the National Open, sanctioned by the World of Outlaws since 2013. 2011 Series Champion Rick Eckert is also a former National Open winner in 2011.

Lanigan has won three times, while 2016 Rookie of the Year Billy Moyer Jr. scored the win that season on his way to the freshman title. 2006 Series Champion Tim McCreadie and Gregg Satterlee also have collected Outlaws victories at Selinsgrove over the years.