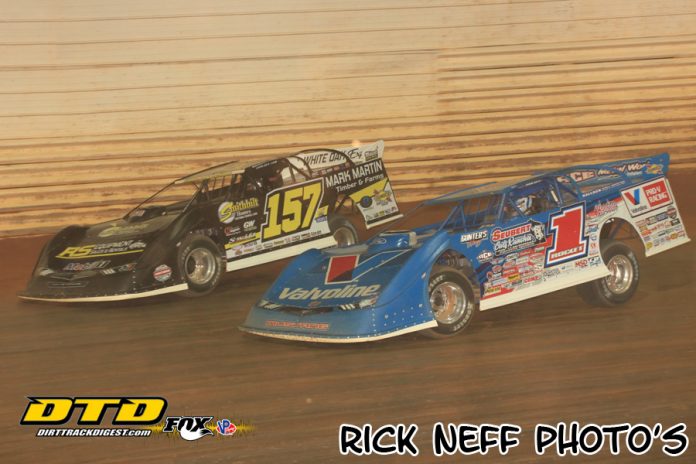 PORT ROYAL, PA – Mike Marlar of Winfield, Tennessee, was victorious over the World of Outlaws Late Models at Port Royal Speedway on Saturday night, scoring a $10,000 payday over Bandon Sheppard.

Marlar started fourth in the field and took the lead from Ross Robinson on the fifth tour of the 40-lap main.

The 410 sprint car main went to Lucas Wolfe for his third oval victory of the season, worth $4,000.  It was the 10th win of his overall career at the track.

Bill Powell won this fourth xtreme stock main of the season to close out the night.

Polesitter Ross Robinson led the first four laps of the World of Outlaws Late Model feature with Marlar getting by second starter Brandon Sheppard on the initial start to hold second.

Marlar pulled a massive slide job in the third and fourth turns to net command, relegating Robinson to second.

Robinson would later withdraw from the event on the 14th lap.

The red flag appeared on the 11th lap for a four car tangle on the backstretch that saw Bryan Bernheisel flip over. Other cars involved were Austin Hubbard, Shane Clanton and Rick Eckert.

Sheppard held second after Robinson withdrew and took his shots at the lead and his second win in as many years at the track with under 10 laps to go.

The door opened for Sheppard after leader Marlar smacked the fourth turn wall on lap 30 and in the ensuing turns Sheppard ducked low to get the lead.

But Marlar blasted the top back around and then Sheppard took another shot a  lap later and again, Marlar was up to the task.

Sheppard would find contest for second during the final few laps as Devin Moran and Jason Covert pressured before falling short.

Marlar’s margin of victory was 1.654 seconds over Sheppard, followed by Moran, Covert and Tyler Erb.

Logan Wagner had the pole for the 25 lap 410 sprint main with Wolfe starting second.

And the pair bounced off of one another moments after the green fell as they raced up the frontstretch.

This allowed Wolfe to blast into control in the first turn in the top groove while Wagner had to take time to straighten out his machine as he entered the corner.

Wolfe was blistering the track in the midst of traffic with seven laps down when the red flag appeared for a backstretch flip by Trey Starks.

Wagner and Greg Hodnett followed for the restart and on open track Wolfe catapulted away, already up to a 3.1 second lead on lap 13.

But at the same time he again entered lapped traffic and this allowed Wagner to close in dramatically and cut the advantage to .376 seconds with five laps to go as the pair raced virtually nose to tail around the oval.

And than a caution flag on lap 20 broke up the battle and saw Wolfe jet away on the restart to pick up the victory by 2.536 seconds.

Bill Powell took the lead from Jason Zook on the second lap to run to the 15-lap xtreme stock win.