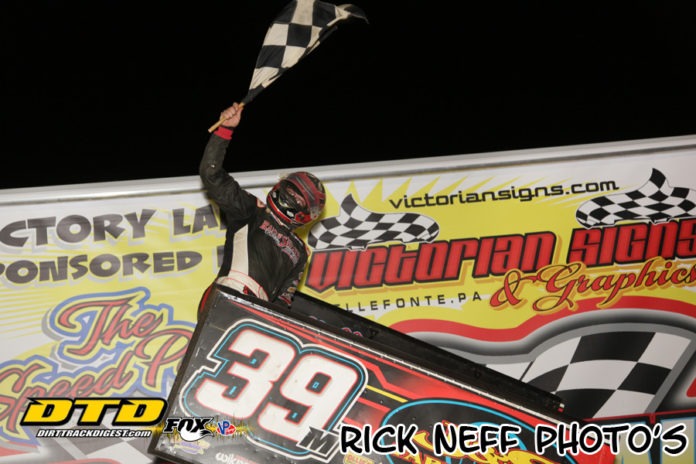 PORT ROYAL, PA –  How much is an overnight 927-mile drive from Knoxville, Iowa to the Port Royal Speedway worth in dollars? For Anthony Macri, it is $5000.

Macri made the 14-hour trip worth every penny Sunday night as he picked up his second career Weikert’s Livestock 410 Sprint Car victory over a hard charging Logan Wagner and Brent Marks on the second night of a weekend doubleheader that represented a return to racing for the Juniata County oval post COVID-19.

“On the road you learn to drive hard because those guys take advantage of every inch you give them,” said Macri, who has been racing out west with local racing shut down. “Coming back to Pennsylvania I knew I couldn’t give anybody and inch and that’s just what we did tonight.”

Macri, who set fast time earlier in the night and received $250 courtesy of Packer’s Concessions LLC, lined up on the outside front row alongside of Apollo, Pa. native AJ Flick and he got the early jump at the green flag, making slight contact with Flick entering turn one.


Defending track champion Logan Wagner and Saturday night winner Mike Wagner followed suit as they overtook Flick at the end of the backstretch to move into the second and third spots to complete lap one.

Meanwhile Lance Dewease, who started fifth, moved into fourth on the lap two and he then overtook the elder Wagner for third on lap three.

By lap five, Macri held a 2.6 second advantage over Wagner and Dewease, who were using every inch of the track trying to track him down. Two laps later they cut the distance in half as Macri battled lap traffic.

By lap 12, Wagner was within striking distance of Macri on the high side of the speedway and Dewease was lurking on the bottom. With Macri heavy into lap traffic, it looked like it would be a three-wide battle for the lead entering turn one, but the caution flew for a slowing Tyler Walton, giving Macri some much needed breathing room and clean air.

“It was kind of a struggle for me as I was dealing with tire spin and lap traffic wasn’t playing nice,” said Macri. “I was thrilled to see that caution because I could hear them back there and I knew what I’d have to do on the restart to get it done.”

When green flag action resumed, Logan Wagner made his move as he went to the bottom of the speedway in turn one and he pulled alongside of Macri exiting turn two, only for Macri to again pull away. Two laps later Wagner tried again and this time he was able to complete the pass exiting turn two.

However, Macri would not be denied as he went to the bottom in turn three and excited turn four with the lead again. Wagner made another slide job attempt on lap 19 entering turn one, but he would not complete the pass.

Brent Marks, who also made the overnight trip from Knoxville to Port Royal, found speed on the extreme high side of the Speedway and he moved past Dewease into the third spot the same lap. Two laps later Macri once again found himself in lap traffic, providing Wagner one last shot to pounce.

Wagner built up momentum the last handful of laps and was within striking distance after taking the white flag, but he climbed the fence exiting turn two with his right rear tire, allowing Macri plenty of distance to cruise home to take the checkered flag by a margin of 3.340 seconds.

“I knew when Logan showed his nose down there in three and four that was probably the place to be,” said Macri. “This track really clicks to my driving style and everything just worked for us tonight.”

For Wagner, who was running second on Saturday before blowing a right rear tire, it was another consistent effort for his team that will pay dividends as he chases a third straight track championship at ‘The Speed Palace’.

“I just got in the wall and used my stuff up,” said Wagner. “I thought when I got by him the clean air would help me, but he got back to the bottom and that the way racing goes. I am just glad for consistent finishes. That’s what wins points championships.”

Continuing to build experience behind the wheel of a 305 Sprint Car, Garrett Bard kicked off his sophomore season by picking up the Penns Valley Meat Market PASS/IMCA 305 Sprint Car feature victory in the series first visit to Port Royal Speedway in 2020.

Bard claimed two victories last season at the speedway and after coming from the fourth starting spot to best Dylan Proctor and Doug Dodson by 2.270 seconds Sunday night, he’s looking to best that number this season.

“I really like this place and it’s fun to get up top and run the fence,” said Bard. “I got into the wall a couple times, which happens when you get up there, but it was just a fun race and a great start to the season at Port Royal.”

Proctor and Eric Statler lead the field to the green flag with Proctor getting the early advantage entering turn one. However, Bard was already hot in pursuit as he went from fourth to second in the first turn’s and pulled alongside Proctor on the outside of turn three and lead lap narrowly at the line.

The caution came out before he could pull away though as Devin Adams had mechanical issues on the following circuit. On the restart, Bard took off, but the caution would fall again two laps later as Nick Sweigart got into the turn two fence.

The lap four restart would be Proctor’s best opportunity and he attempted to slide under Bard entering turn 1, but he could not make the move stick and Bard powered away.

On lap 12 Bard hit lap traffic, but with nearly a 2 second advantage over Proctor at his expense, he was able to navigate the slower traffic with ease.

Dodson, who started ninth had moved into a podium spot and was now challenging Proctor for the runner up position. At the completion of the 20-lap event Bard took the checkered flag, his third of the season in the PASS division, over Proctor, Dodson, Christian Rumsey and Jared Zionkowski.

“I was just hoping for things to stay green and if so, I didn’t think anyone had anything for us,” said Bard. “I was just going to keep running the top, keep gaining momentum up there and I knew we’d be ok.”