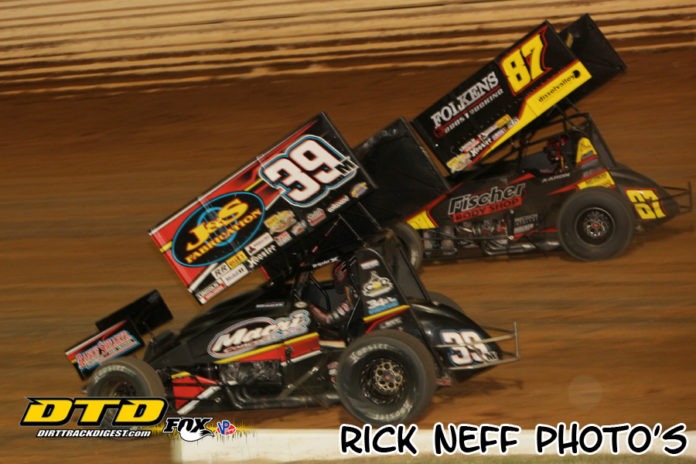 PORT ROYAL, PA – As part of the Port Royal Speedway’s offseason renovation plans, victory lane got a fresh look. Mike Wagner may have been the first one to visit it, however track officials may want to re-name it the Anthony Macri landing zone after last night’s race.

For the third consecutive race, Macri visited victory lane as he bested a star-studded field of Weikert’s Livestock 410 Sprint car drivers and Ollie’s Bargain Outlet All Star Circuit of Champions drivers to claim the $6000 prize during a rare Wednesday night showing of the 5th Annual Keith Kauffman Classic.

The win was the first All Star victory of the Dillsburg, Pa. native’s young career and further proved him as the early favorite heading into the 2020 Pennsylvania Speedway schedule, where a champion will be crowned July 4th in the very victory lane he’s grown so accustomed to visiting recently.

After moving from fifth to first on the opening lap of the Dash, Macri earned the pole position alongside of the night’s fast timer Brock Zearfoss and when the green flag dropped, it was Macri jumping out to the early lead.

As Macri raced around the top of the speedway, Zearfoss stayed glued to the bottom of the track and by lap eight, Macri was already mired in heavy lap traffic. However, showing how dominant he was, Macri was able to slice in and out of traffic with ease.

Meanwhile, Zearfoss had his hands full as defending All Star champion and Tuscarora 50 winner Aaron Reutzel, and Danny Dietrich battled for the third position behind him.

Wiping out a 3 second advantage, the caution flew on lap 10 as Tyler Bear slowed on the backstretch.

On the restart, Macri once again proved to be steady as he blasted out to a large lead again and two laps later, Reutzel got by Zearfoss for the runner-up position and set his sights on Macri. Dietrich followed suit and moved into third six laps later as Macri once again was dicing through lap cars with a nearly 3.5 second advantage on Ruetzel.

Reutzel, who was using the middle of the speedway to make up ground, was slowing reeling in Macri and had cut the distance to under two seconds when the caution flew again on lap 21 for a slowing Zearfoss on the front stretch.

Reutzel tried to slide under Macri on the restart, but he wasn’t able to get nearly close enough to make a pass exiting turn two and Macri instantly put a large distance between him and the field. Over the final nine laps, Kyle Larson tried to make it exciting as he found the top of the Speedway to advance up the second position with five to go.

However, Macri would not be denied as he took the checkered flag with a 3.568 advantage over Larson. Dietrich passed Reutzel at the line for the third position and Brent Marks rounded out the top five.

“I was trying to push hard in lap traffic, but I was happy to see the yellows just so I could have clean air and drive it as hard as I could,” said Macri. “The month we spent on the road changed me as a driver and I came back here ready to win.”

For Larson, he wished he would’ve gotten another caution to maybe get a shot at Macri but was excited for a solid finish heading into the daunting PA Speedweek schedule.

“I was able to get to the top after that last restart and I was honestly shocked that everybody stopped running the top in one and two,” he said. “The last few laps were a lot of fun and I was hoping for a caution when I got to second. It was a good way to start out the PA swing.”

Following a trend of drivers going back-to-back at the Speed Palace, Gregg Satterlee held off Ross Robinson to pick up his second consecutive River Valley Builders Super Late Model victory of the season.

The win was worth $3000 courtesy of Lauver’s Concessions and the sixth of his career at the Juniata County oval.

“This is so awesome and it’s such a privilege to race here and I’m glad we live close enough to make the trip here each week,” said Satterlee. “It’s really just good to be able to get out and race as it was slow spring with all the cancellations, so to win really is just a plus.”

Robinson and Jeff Rine led the field to the green flag with Rine getting the early jump on the outside of the speedway. However, Robinson stayed even with him down the backstretch and stayed glued to the bottom of the track to lead lap one by a nose. Rine returned the favor the following circuit to lead lap two by a nose as the two raced side by side again.

The following circuit, Robinson got enough momentum exiting turn 1 and was able to pull ahead to lead lap three.

Satterlee, who started third, made his move to the runner-up position the following lap as he diamonded turn three and four to cross under Rine for the second position heading to the line.

Running the middle of the speedway, Satterlee was able to chop away slowly at Robinson’s lead and by lap nine he was on the bumper of the leader on the backstretch. He stayed hooked to his bumper for another lap and on lap 11 he slid up in front of Robinson exiting turn four to lead the lap.

By then, sixth-place starter Rick Eckert had moved into the third position, but the front two were putting on a battle for the ages. With Satterlee engaged in lap traffic on lap 14, Robinson again pulled even with the leader on the backstretch, but he wasn’t able to complete the pass exiting turn four.

Robinson regrouped and tried again on lap 20, this time on the outside of the speedway. Once again Satterlee pulled away coming to the line and the two switched lines on the track the following lap to the same result.

Robinson would stay within striking distance over the final four circuits, but ultimately it would be Satterlee taking the checkered flag by a 1.010 second advantage to complete the drive for two-in a row.

“We’ve got a pretty good roll going on here and we have a pretty good car so I hope we can keep it going,” said Satterlee. “Ross had a really good car, but I was able to make a couple good laps and get some momentum going to pull away. I changed my line there late a couple times and with a track like this, you can do that and ultimately it paid off.”

For Robinson, it was yet another bridesmaid finish for the second time this season.

“It sucks to run second, but to get beat by him you can’t really complain,” he said. “We’re close and I want to get one of these things really bad. We caught lap traffic a couple times and we caught him, but overall, I can’t complain as he’s just really good.”