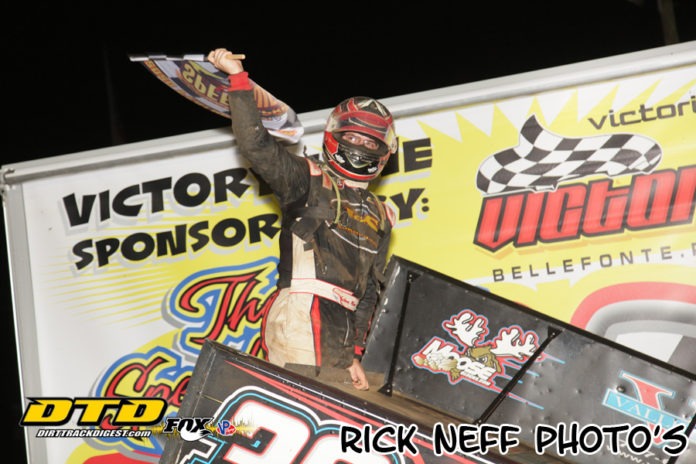 PORT ROYAL, PA – Located just outside the entrance to the front stretch grandstands, there are several reserved parking spots for the Port Royal Speedway. Whether they be for sponsors or fans, they are the best spots in the facility.

Though, for the past four weekends Anthony Macri has found his own reserved parking spot- victory lane- and he is getting paid quite nicely to park there.

Macri found himself sitting in the newly constructed victory lane for 2020 as a winner for the fourth consecutive race, besting Lance Dewease and Aaron Reutzel for the Round 6 of Pennsylvania Speedweek presented by Red Robin Gourmet Burgers triumph. The win was the first Speedweek triumph of Macri’s career and was worth $7000.

He followed that up later in the night, in only his second career 360 Sprint Car start and first for former sprint car driver Sean Michael, by besting the United Racing Club 360 Sprint Car field for his fifth straight victory at the Juniata County oval. This one was worth $2000.

“I’m sure this isn’t going to sink in until tomorrow morning and I really don’t know what to say,” said Macri. “I got to thank my crew and they do one heck of a job. We haven’t had the best Speedweek up to this point, so this one is pretty special.”

The feature started off chaotic as before the green flag ever flew, NASCAR star and scheduled pole sitter Christopher Bell, pulled off the track with motor issues and ended his night early.

Brock Zearfoss inherited the pole position as a result and after the green flag it was a three-way battle for the lead between himself, track point leader Logan Wagner and Lance Dewease heading out of turn two. However, seventh-place starter Cory Eliason spun out between turns 1 and 2 and collected Robbie Kendall to bring the field to a halt. Neither driver rejoined the field.

On the restart, Wagner got the jump on the field and set sail on the outside of the Speedway to a nearly 2.0 second advantage. With Zeaross settled in second, fifth-place starter Macri was swapping positions with Dewease for third.

On lap seven Dewease got by Zearfoss to move into the runner-up spot and two laps later he was on the tail of Wagner as the leader entered lap traffic.

One lap later Macri began his march forward as he passed Zearfoss to move to third at the start/finish line and three laps later he used the high side of the track in turn’s one and two to gain momentum and cruised by Dewease on the backstretch for second.

One lap later, Tyler Bear came to a slow on the front stretch to bring out the caution and wiped out a 1.491 second advantage for Wagner.

On the restart, Macri dove to the bottom of Wagner on entry in turn one and slid in front for the lead, but Wagner crossed back under down the backstretch to regain the lead with 16 to go. The two swapped the lead again the next circuit before Macri used momentum coming to the line to pull under Wagner to lead his first lap of the night on lap 16. Meanwhile, All Star Circuit of Champions points leader and Speedweek invader Reutzel, had moved into third and he got by Wagner for second on the bottom of the track on lap 18.

Dewease followed suit two laps later to move into third and both he and Reutzel set their sights on Macri. Macri hit lap traffic again on lap 23 and as he struggled to dispatch the lapped cars up high, Reutzel and Dewease were reeling in the Dillsburg, Pa. native on the bottom of the track.

With three laps to go, Reutzel and Dewease were both within two car lengths of Macri and Reutzel poked his nose inside of Macri at both ends of the speedway heading to the white flag. With the lap car of AJ Flick on the bottom of the Speedway in turn 1, Reutzel attempted to drive through the middle of the turn and allowed Dewease to pull ahead for second.

Macri was able to then clear Flick heading into turn three to thwart Dewease’s last ditch effort and he crossed under the checkered flag by a .861 margin of victory over Dewease and Reutzel. Kyle Larson and Wagner rounded out the top five while Danny Dietrich, Ryan Smith, Brent Marks, Freddie Rahmer and Zearfoss filled out the top ten.

“I was playing it cool the first half saving my tires and I just tried to pounce in lap traffic when I could,” said Macri. “With two laps to go I was struggling a bit with the lappers and I saw somebody poke their nose down there and I just kind of pushed the gas a little harder and here we are.”

Dewease was happy with the finish and felt like Macri had the better car.

“Anthony has been really good here and he’s learned how to run the bottom when he needs to and we just need to get better,” he said. “We were pretty good on the bottom, but Anthony has a good line to run the top along with the bottom and we were probably a second-place car tonight.”

Alan Krimes advanced from the 21st starting position to finish 14th and as a result he earned the $200 hard charger bonus courtesy of Valley Supply Inc. Kyle Larson was the night’s fast timer and he received a $200 bonus courtesy of Packers Concessions.

For the sixth consecutive time dating back to 2017, a 410 Sprint Car driver pulling double duty picked up the URC 360 Sprint Car victory at Port Royal Speedway as Anthony Macri continued his winning ways at the Juniata County oval.

Macri passed Dallas Schott with five laps to go to claim the $2000 prize by an advantage of 3.780 seconds. The win was Macri’s first career triumph in 360 Sprint Car action anywhere and completed the clean sweep for the night after claiming the 410 Sprint Car feature earlier in the night.

“This whole night just isn’t really registering right now, and I don’t really know what to say,” said Macri, who was making his first-ever start for former driver Sean Micheal. “I wasn’t really sure I even wanted to do this tonight to not mess up our 410 program and it being Speedweek, but I’m glad we decided to go for it.”

Jonathon Preston and Chad Layton led the field to the green flag, and it was Preston jumping out to the early lead over fourth-place starter Schott.  The field would slow though one lap later as Mike Thomas slowed on the track.

Using double file restarts, Schott challenged Preston for the lead entering turn one, but Preston was able to pull away on the outside to lead lap three. The field once again came to a slow when Tyler Templin got turned around in turn 1 the following lap.

This time on the restart, Schott was able to make the pass and he led lap five. For the next two laps Preston stayed glued to the bumper of Schott, but the caution once again flew on lap seven.

Preston got the jump on the restart and it appeared he would lead lap eight, however the caution came out again for a slowing car, negating the pass.

Now using single file restarts, Schott got the advantage on the restart. Three laps later, Macri began to make his move. Running in fourth, Macri slid under Derek Locke for third in turns one and two and the top three cars were all nose to tail on lap 18 when the final caution of the night fell for a spinning Ryan Stillwagon.

As a result of the multiple cautions, teams were granted a red flag fuel stop, setting up an eight-lap dash for the win.

Schott jumped out to the lead again after a return to green flag action and Macri was able to slide under Preston entering turn three to move into the runner up spot. Macri set his sights on the leader and two laps later he pulled ahead of Schott exiting turn for to take the lead for good.

“There for a while I didn’t think we were going to get that one, but as the race went on those guys were blowing through their tires and I was kind of saving mine,” said Macri. “We were kind of just playing the waiting game there but with the yellows I knew I had to get going or someone was going to get us on a restart. This is a night to remember for sure.”

For Schott, it was only his seventh career start in the division, and he believes he is on his way to success.

“If you don’t know me yet, you’re going to know me soon,” said Schott. “It’s hard to beat a guy who has all those wins already so many laps and I’m just really thrilled to run second.”