Originally scheduled to kick off the 2021 racing season last weekend, speedway officials and the track promotion team decided that with cold weather and high winds in the forecast that it would be in the best interest of all parties involved to delay the opener until this weekend in hopes of better weather conditions.

Wagner is the series defending champion and is looking to join rare air in becoming only the second driver to ever win four consecutive track points championships. All-time winningest driver, Keith Kauffman, is the only other driver to accomplish the feat as he did so from 1978-1981. Speaking of Kauffman, Dewease sits 14 back of the ‘Man from Mifflintown’ on the career winns list with 115 victories and will be looking to chip away at that total for his fourth career opening day trophy.

Last year’s winningest sprint car driver at the speedway, Macri, will be searching for his first career opening day triumph along with a who’s-who list of regular competitors and expected invaders searching for the $5000 prize.

The last driver to triumph on opening day and go on to claim the season ending track points title was Todd Shaffer in 2008.

Valley Supply will again serve as the series hard charger presenter and there will be $200 on the line for the driver who passes the most cars. This will also be the debut of their fan incentive program where the fans will have the opportunity to bring home various Valley Supply swag and possibly $30 cash and tickets the following week’s racing event.

Also new to this season is the Jim and Sandy Kline J&S Fabrication Warrior Award where one lucky driver will earn $1000 extra as a result of a random draw. This award is designed specifically to benefit those who finish farther back in the field and drivers eligible will be position’s 7-24.

The Super Late Models have been a part of opening day festivities yearly since 2013 and both Haus and Covert have two career triumphs in the event. Other drivers to claim victory in the division on opening day are Tim Wilson, Lupfer and Jeff Rine. Rine turned his triumph into a track championship in 2018.

New to this season, the series will race for a minimum of $3000 to win and $300 to start. This is a $500 increase on last year’s winner’s share and will be the standard for all races in 2021 for the division. Geroge’s Used Cars Inc. Will serve as the presenter of the series hard charger award with the driver passing the most cars at the end of the night earning a cool $200 in cash. Driver’s must be carrying a decal that will be passed around earlier in the night to be eligible.

For fans choosing to watch from home, racing activities will again be available via PPV streaming on FloRacing and information regarding purchase can be found at ww.floracing.com.

Weather permitting, there will also be an open practice at the Speedway Friday March 12th from 6-9pm. The session is open to any division cars participating at the Speedway in 2021 and grandstand admission is free for any fans wishing to catch a glimpse of the facilities/cars. 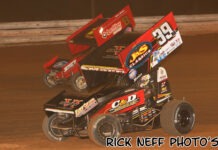