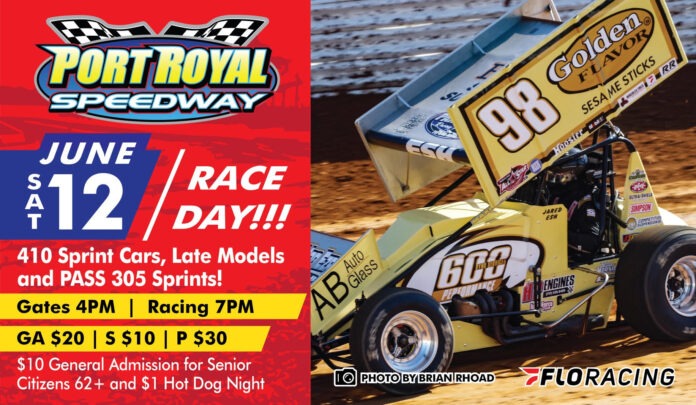 PORT ROYAL, PA – Port Royal Speedway is set to host three divisions of racing as part of Senior Citizen Night on Saturday, June 12. The Weikert’s Livestock 410 Sprint Cars will again be in attendance and they will be joined by the River Valley Builders Super Late Models. Finally, the Penns Valley Meat Market PA Sprint Series 305 Sprint Cars will return to the track after a month-long absence from the track.

In Weikert’s Livestock 410 action, Jared Esh enters the weekend as the most recent winner in the division as he held off a charging Logan Wagner, Jeff Halligan, Mike Wagner and Dylan Cisney last weekend for his first win in two seasons.

Jason Covert scored his first Port Royal Speedway victory of the season last week in Super Late Model competition and he did so by holding off the rim-riding ways of Colton Flinner followed by Gary Stuhler, Dylan Yoder and Ross Robinson.

Delaware native Ross Robinson sits tied atop the series points standings with Yoder. Stuhler (-55), Flinner (-145) and Tyler Bare (-165) make up the top-five. None of the drivers in the top-five have yet to win a feature event at the Speedway and they will all be looking to land in Victorian Signs victory lane this week for the first time in 2021.

Dave Grube was the last winner in the 305 Sprint Car division and he currently sits atop the point standings with a 10-point advantage over Ken Duke. Last year’s champion, Garret Bard, sits in third (-55) followed by Austin Reed (-95) and Nick Sweigart (-105).

In three nights of racing the division has seen three different winners and you can expect a large field of drivers looking to make it an even four. 67 different drivers in the division have competed at the Speedway at least once this season.

For those unable to attend, racing will be available for viewing via FloRacing and more information can be found at www.florracing.com