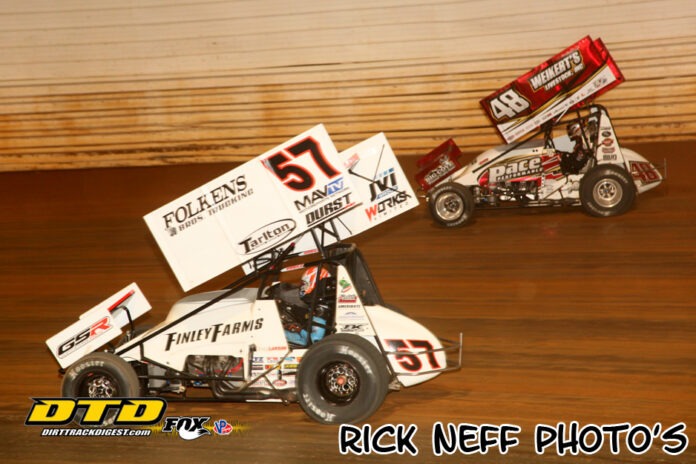 Port Royal, PA – For fans who attended the night six Pennsylvania Speedweek presented by Red Robin Gourmet Burgers event at Port Royal Speedway on Wednesday night, they were treated to one of the most exhilarating races of the year.

The race featured bad luck, lead changes, slide jobs and drama and when it was all said and done, it was Elk Grove, California’s Kyle Larson holding off the very best that Pennsylvania has to offer in a battle that fans will likely be talking about for years to come.

“That was wild! I drove my ass of out there,” said Larson. “My car was just getting better and better and that was definitely a lot of fun.”

Anthony Macri and Danny Dietrich led the field of 24 cars to the green flag and it was Macri getting the early jump and going straight to the top of the Speedway. Larson, who started seventh on the grid, moved into the top-five one lap later.


However, the caution flew after only two circuits to halt any momentum when current Speedweek points leader Brent Marks came to a slow on the backstretch with motor issues. Marks attempted to rejoin the field, but pulled off again as the issues remained.

Macri again got the jump on the restart and Wolfe got by Dietrich to take the runner-up spot as well. Two laps later Abreu slipped by Larson on the bottom of turn’s three and four to move into the top five, while fourth-place starter Jeff Halligan was also making his presence known as he got by Dietrich for third.

The Concrete Kid raced out to a full straightaway lead over the next handful of laps, but his hopes of earning yet another Port Royal victory came to an end after seven laps when he clipped the lapped car of AJ Flick, who had spun deep in between turn’s one and two. The contact sent Macri’s car on its side to bring out the red flag and he would be unable to return.

Macri’s misfortune handed the lead to Wolfe and he worked the restart to a charm and blasted out to a hefty lead over Halligan. Dietrich briefly moved back into the second position before Halligan got back by on lap 10 and turned his focus to Wolfe.

Two laps later it was Larson sliding past Dietrich for a podium spot, while Halligan was putting the pressure on Wolfe. With 16 to go, Halligan attempted a slide job in turn’s three and four, but Wolfe thwarted the effort and again was able to pull away.

Dewease, who started 11th on the grid, crept his way into the top-five with 14 to go and one lap later Wolfe approached the tail-end of the field and was working his way through lapped traffic. Dewease got by Dietrich for fourth on the following circuit and with 10 laps remaining second through fourth were all three wide heading to the flag stand

The battle allowed Dietrich, whose car suddenly came back to life on the top of the Speedway, to move back into the fourth position past Dewease and Larson got by Halligan for the runner-up position with eight laps remaining.

Larson blasted away from Halligan, who quickly was dispatched of by Dietrich and Dewease for third and fourth the following lap and the trio set their sights on Wolfe. With seven laps to go, Larson was all over Wolfe for the point, but Wolfe held his ground and was able to slightly stretch his lead heading to the flag stand. Larson tried again in turn’s one and two with five laps to go, but Wolfe was steady with his line up top.

Larson got his opening the following lap as Wolfe smacked his right rear against the outside guardrail in between turn’s one and two, which allowed Larson to pull ahead for the lead down the backstretch and entering turn three. Wolfe diamonded the turn exiting turn four to pull alongside of Larson heading to the line and it was Larson by mere inches with three laps remaining.

This time it was Larson getting into the outside guardrail in turn one, allowing Wolfe to power back to the lead entering the backstretch. Dewease pulled even alongside Larson for second as well, while Dietrich lurked just behind the pair in fourth.

Wolfe led the lap at the flag stand, but Larson had him set up entering turn one and again pulled under for the lead exiting turn two. Wolfe tried a crossover move down the backstretch and the two leaders were dead even heading into turn three, but Larson had the preferred line up top and cruised ahead to take the white flag.

Dewease and Dietrich both split Wolfe to move into second and third, but the clean air ahead of Larson and the battling behind him allowed him to cruise ahead untouched to take the checkered flag by 1.190 seconds over Dewease and Dietrich. Wolfe came home fourth followed by Abreu.

“I got my wing too far back and I got too greedy in turn one and plugged the fence and came across and thankfully Lance wasn’t able to slide me,” said Larson. “I had to throw some big bombs at Lucas for the lead and that was just wild out there. What a fun race that was and I just love this place.”

For Dewease, he didn’t think he had a car capable of contending early on and felt lucky to be in contention at the end. His team dealt with mag issues after heat races and they were scrambling just to start the feature.

“They had half the cars on the track and we still didn’t have a mag in the motor yet,” he said. “They got the mag in, put fuel in, threw tires on and never even touched the race car so to run second against these guys is great. We were not that good and hats off to Kyle. That was a hell of a race for these fans and I’m just happy to part of it and be in second.”

For Dietrich, he was disappointed to be third but was able to capitalize on Marks early misfortunes to overtake the Speedweek points lead by 10 points with four races remaining on the schedule.

“The 57, Lance and I really got rolling there in the middle of the race and we were just as good as the 57 car but we needed to be ahead of the 69k to get there,” he said. “I hope the fans enjoyed that race, but I know as a driver it was fun as hell. We want to win a Speedweek championship, but we also want to win these races. I’m not complaining, but I want to be standing in victory lane and we’ll keep at it.”

Anthony Macri overcame the disappointment of losing out on a opportunity to win the 410 portion of the PA Speedweek event by winning the United Racing Club 360 feature event from the third starting spot.

Macri’s win was worth $2000 and was his second of his career in the division at the Speedway. Macri took his time reeling in pole sitter Adam Carberry and took the lead for good with five laps remaining to earn the victory by 3.989 seconds.

The win continued an 11-race trend with the series at Port Royal Speedway that has seen 410 drivers claim victory pulling double-duty.