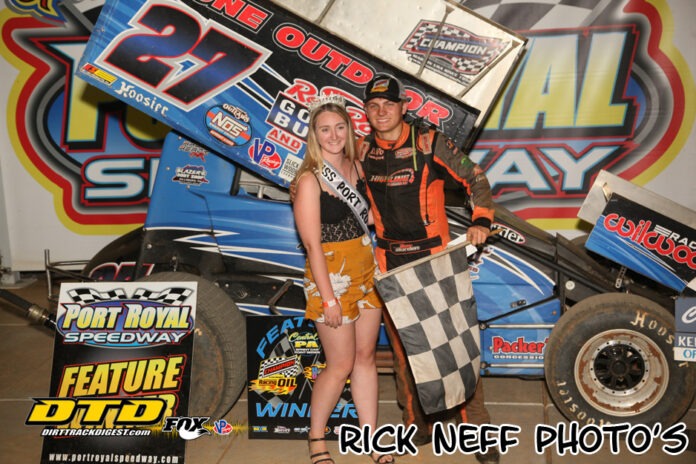 PORT ROYAL, PA – Prior to racing activities for the night, kids filled the frontstretch and victory lane as they participated in a Kids Money Scramble presented by Pennian Bank. As it turned out, another kid found his way to victory lane to claim money in victory lane to end the night as well.

18-year-old Devon Borden capitalized on a front row starting spot and an extremely fast race car to claim the $4000 winner’s prize and become the 188th driver in Port Royal Speedway history to claim a victory in the 410 Sprint Car division.

The win capped off a big weekend for the Raymond, Washington native aboard the Mike Heffner No. 27 as he picked up first career 410 victory the night prior at Williams Grove Speedway for a clean sweep.

“This is just absolutely crazy. What a heck of a weekend and I don’t know if things could have gone much better,” said Borden. “They call this place the speed palace because it’s fast and this is why I wanted to come here.”

Pat Cannon and Borden lined up on the front row for the 25-lap A-main event and he blasted to the front on the high-side of the Speedway exiting turn two on the start.

Within five laps Borden had approached lapped traffic and he starting picking them off with ease, building a full straightaway advantage on second-place Cannon.

Meanwhile sixth-place starter Gerard McIntyre Jr. and fourth-place starter Mike Walter II were battling for the third position. Walter gained the spot on lap eight and two laps later he slid by Cannon to move into the runner-up position. However, Borden was on cruise control as he held an advantage of nearly 6.0 seconds at the time.

15th-place starter and track points leader Logan Wagner was also on the move, breaking into the top-ten on lap seven and steadily moving forward. Also, eight-place starter Jeff Halligan was charging forward as he moved into a podium spot on lap 13 and two laps later, he dispatched of Walter to take the runner-up position.

For a brief moment it appeared that Halligan was tracking down Borden, shaving a full second off the advantage as Borden battled in lapped traffic. However, two laps later Borden increased his lead to over seven seconds showing he wouldn’t be denied.

“You really have to run the boards here to compete for wins and that’s what I knew I needed to do,” said Borden. “I wasn’t worried about what was going on behind me and I just stayed hammer down and tried not to mess it up.”

Wagner moved into the third position on the white flag lap, but Borden was in a different area code as he crossed under the checkered flag by an advantage of 9.440 seconds.

“We came here to get some experience on half miles and there is a race later this year worth $54,000 to win and we want to have a shot to win it,” said Borden. “We’re really getting things figured out on this car and man this is fun. I’ve been watching races from this place for years and I always dreamt of winning here and this is almost unbelievable.”

For Halligan, he believed he had a car capable of winning, but he needed a caution to have anything for Borden.

“I felt pretty good and for a second I actually thought I was in the lead as I didn’t see anyone in front of me,” said Halligan. “I think a caution would have changed things up a bit, but this is a new car we just put together and to run second I’m pretty proud of that.”

The $3000 triumph was the second of Lee’s career at the Juniata County oval and was exceptionally satisfying as Lee missed several weeks earlier this season after breaking his hand in an accident at the Speedway.

“It’s been a very trying year for us and we really needed this one as a team,” said Lee. “It definitely helps a lot to start up front as clean air means everything at this place.”

Roy Deese and Lee led the field to the green-flag and Lee quickly jumped to the lead on the opening circuit. Third-place starter Andrew Yoder moved into the second spot a few laps later, while fifth-place starter Dylan Stake slid into third as well.

Championship contenders Gary Stuhler, Ross Robinson and Dylan Yoder all hovered around the top-five as well, while opening day winner Trevor Feathers was coming on late. Feathers broke into the top-five with under 10 laps to go and he got by Stuhler for fourth with 7 to go.

However, Lee was in his own space as he built up over a 5.0 second advantage with three laps to go. Feathers would get by Stake for a podium spot on the white flag lap, but Lee was not to be denied. He crossed under the checkered flag by an advantage of 5.257 seconds over Yoder, Feathers, Stake and Stuhler.

“We’ve been working so hard at this deal and it just means all that much more when you can park it in victory lane,” said Lee. “We’re moving in the right direction and I think we’re getting pretty good. I’m looking forward to the rest of the season.”

For Yoder, the runner-up finish was a pleasant surprise for the rookie in the super late model division.

“This one means a little more than the success we’ve had in the Limited,” said Yoder. “It;s just nice to be back up on the podium and have something to be proud of. We’re getting to a point where I feel we can be competitive and that’s rewarding.”

Garret Bard held off multiple drivers to pick up his first Penns Valley Meat Market PA Sprint Series 305 Sprint Car victory of the season at Port Royal Speedway Saturday night. The win catapulted Bard to the top of the points standings as he looks to earn his second consecutive track title with the series.

“I knew Kenny was there on the restarts and I had to block him and then I knew I had to take the bottom away as well,” said Bard. “Those guys were all over me and I was just trying to be smart and take their lines away when I could.”

Bard and Tyler Snook started on the front row and it was Bard jumping out to the advantage early. While the results will show Bard led all 20 laps, he had to work incredibly hard to hold onto the lead.

Snook and fourth-place starter Kenny Heffner were all over the tail tank of Bard trying to wrangle the top spot from the series ace. However, neither driver was able to capitalize on the momentum and take over the top spot.

Bard went on to take the checkered flag by a margin of .454 of a second at the line. The win was the seventh of Bard’s career at the Speedway and puts him in sole possession of second all-time on the track win list in the division.

“I was banging the boards pretty good up top and I was pretty much getting sucked in up there, but I knew I’d be alright,” said Bard. “I just had to hit my marks and do my thing and I felt like the results would take care of themselves. That was a fun one out there.”