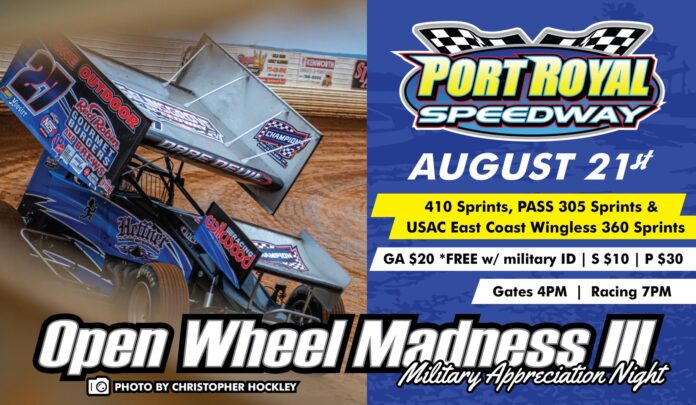 PORT ROYAL, PA – “Though this be madness, yet there is a method in it” – William Shakespeare

Three divisions of exciting open wheel sprint cars all for the price of $20 General Admission. Students are $10 while Pit Admission is $30.

Also, it’s Military Appreciation Night at the Speedway and all former and current military members with a valid form of ID (Military CAC ID or DD-214) will receive free general admission for the evening.

Most recently in Weikert’s Livestock 410 Sprint Car action, Devon Borden picked up the win over Jeff Halligan, Logan Wagner, Mike Walter II and Blane Heimbach. Logan Wagner currently sits on top of the series points standings with a 320-point advantage over Halligan. Dylan Cisney (-335), Mike Wagner (-335) and Gerard McIntyre (-1050) make up the rest of the top-five.

In recent PA Sprint Series 305 Sprint Car action, Garrett Bard picked up his first victory of the season in the division at the Speedway enroute to taking over the points lead as well. Dave Grube (-50), Ken Duke (-100), Austin Reed (-165) and Kassidy Kreitz (-220) make up the rest of the top-five.

This will be the second visit of the season for the USAC 360 Sprint Cars. Alex Bright picked up the victory with the series back in April and he currently holds a 29-point advantage in the point standings over rookie Briggs Danner. Damon Paul (-263), Nash Ely (-282) and Tommy Kunsmon (-359) fill out the rest of the top-five.

For fans unable to attend, racing will again be available for viewing via FloRacing and more information can be found at www.FlorACING.COM.