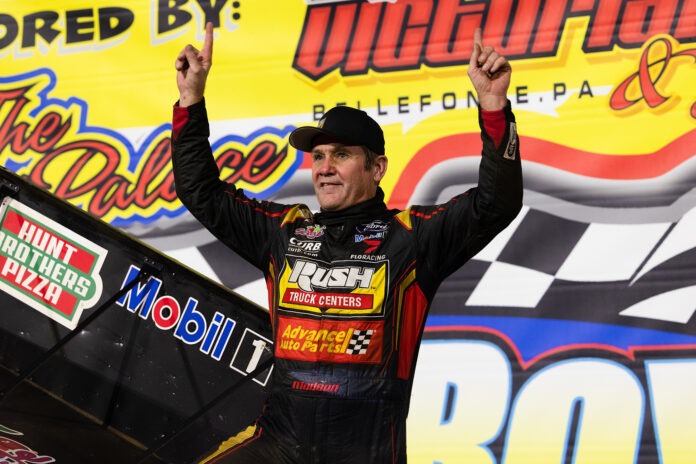 PORT ROYAL, PA –  The Nittany Showdown at Port Royal Speedway kicked off with a bang on Friday night as fans witnessed the closest finish of 2021 for the World of Outlaws NOS Energy Drink Sprint Car Series.

After an exciting 25-lap affair around The Speed Palace, it came down to a mere 0.081-seconds between Kerry Madsen’s Tony Stewart/Curb-Agajanian Racing #14 and Lance Dewease’s Kreitz Racing #69K as the checkered flag flew.

The win was especially sweet for Madsen, who returned to the seat of a Sprint Car for the first time in eight weeks since he went for a gnarly crash at the Knoxville Nationals in August. The Sydney, New South Wales gasser showed no signs of rust as he scored his third win of the season with The Greatest Show on Dirt.

In his 799th career start, the win marked his 28th and moved him into sole possession of 22nd on the All-Time Wins List.

“I can’t say enough about this Tony Stewart Racing team,” Madsen said in victory lane. “I was a little bit rusty to start the night, but they kept tuning on the car and got me more and more comfortable. I was really good early in the Feature and kind of protected more so in the second half. What a fantastic car, though.”

At three different points, Anthony Macri, Logan Schuchart, and Donny Schatz all momentarily held the race lead, but none officially had the top spot at the start/finish line.
Macri offered a brief challenge on the opening lap but slipped backward as Schuhcart came to life. The Hanover, PA native was poised to drive the Shark Racing, Drydene Performance Products #1S to the point on Lap 6 when chaos ensued. Trying to avoid a spinning lap car, Schuchart ran out of room between car and wall, thus colliding and knocking the front end out and ending his shot at the win.

More drama followed when championship leader Brad Sweet bent a wheel and went to the work area while running third. He ultimately finished 14th in the Kasey Kahne Racing #49 and now leads Gravel by +112 points with six nights left.

Madsen’s TSR teammate was next up to challenge. Schatz exchanged a handful of sliders aboard the Ford Performance, Carquest #15, but never quite had enough to assume full control over Madsen. He fell back to third with five to go and Lance Dewease came to life.

The final restart with six laps left saw Madsen initially pull away from the #69K, but the PA Posse legend came to life as the flagman showed two to go. He chopped off a huge chunk of Madsen’s lead and was right on his back bumper at the white flag.

Dewease wanted the low line but opted high where Madsen planned on forcing him. The duo raced off tour four as the crowd rose to their feet and witnessed a nail-biting finish with the #14 edging ahead by 0.081-seconds, the closest finish in the last 110 races.

It wasn’t a win, but Fayetteville’s Lance Dewease collected milestones like his 75th career top-five and 150th top-10 with the Outlaws on Friday night by finishing second. He’ll return tomorrow with hopes of a 120th Port Royal Speedway win and 18th career Outlaws victory.

“Our biggest problem is those double-file restarts because I would lose four spots and have to pass the same guys like five times,” Dewease said. “Our car was good, though. The tires never really fired back off on that last restart, but we gave it everything we had. He was down where I wanted to be, so you have to go where they’re not and we made it close. Tomorrow is a longer race, we’ll be there.”

Polesitter Anthony Macri momentarily led early on but fell back to as far as fourth before recovering to a third-place finish. The Dillsburg, PA native now has five podiums through 40 starts with the World of Outlaws. The popular driver of the #39M has another chance at his career-first victory tomorrow with $15,000 on the line.

“It would’ve been awesome to get that first career win, but we were the third-best car tonight,” Macri mentioned. “This was more of a normal Port Royal surface with the way the weather was and we need to adapt better to that. We’ll go to work and be better tomorrow.”

After battling for the lead early on, Donny Schatz slipped back to finish fourth aboard the Tony Stewart/Curb-Agajanian Racing #15 and narrowed the gap between him and Carson Macedo for third in the championship. Rounding out the top-five was KSE Hard Charger, Brent Marks, who pieced together a stellar 20th-to-fifth bid in the family-owned #19.
Closing out the top-10 on Friday night was David Gravel in sixth, Lucas Wolfe with a new Toyota Racing Development engine in seventh, Sheldon Haudenschild in eighth aboard the NOS Energy Drink #17, Salfordville’s Freddie Rahmer with an impressive 24th-to-ninth charge, and Gettysburg’s Danny Dietrich with his 47th career top-10 against the Outlaws.

UP NEXT: The World of Outlaws NOS Energy Drink Sprint Car Series concludes the $15,000-to-win Nittany Showdown at Port Royal Speedway in Port Royal, PA tomorrow, Saturday, October 9. The event will feature an early start time with Hot Laps at 4pm and racing at 5pm. If you can’t be there, watch every lap LIVE on DIRTVision.