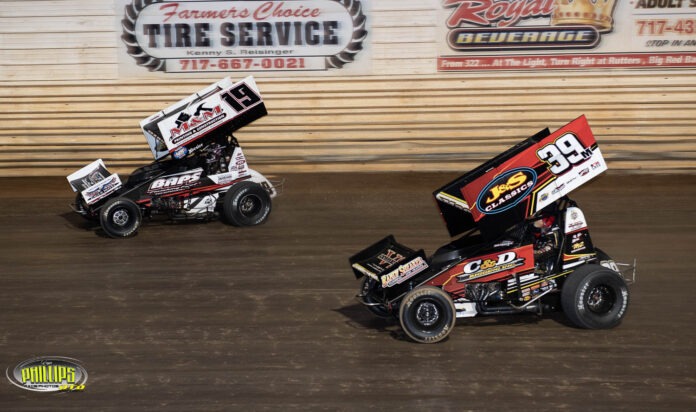 Earlier this week it was announced that all gate and start times would be moved up two hours as a result of colder weather conditions and gates will open at 1:00 PM and racing is set to kick off at 4:00 PM.

In Weikert’s Livestock 410 Sprint Car competition, Anthony Macri enters the weekend as the series points leader after he picked up the victory two weekends ago for his first win of the season at the Juniata County oval. Macri leads Danny Dietrich by a margin of 20-points followed by Mike Wagner (-25), Justin Peck (-55) and Brent Marks (-70). The series will be competing for $4000 to win and $400 to start. Tow money in the series is now $200 for weekly competition, which is a $100 increase for the 2022 season.

Following back-to-back victories to open the 2022 season in Krill Recycling Super Late Model competition, Colton Flinner sits on top of the series point standings by 65 markers over Gary Stuhler. Mike Lupfer (-105), Kyle Lee (-120) and Trevor Collins (-135) complete the rest of the top five. The series drivers will be competing for $3000 to win and $300 to start, which is part of the highest weekly purse for Super Late Models in the entire country. Beginning this weekend, the series will receive $200 two money for those who do not qualify for the feature, which is an increase of $100 for the 2022 racing season.

As an added incentive, the winner of this Saturday’s event will also receive a guaranteed starting spot for the April 10th Lucas Oil Late Model Dirt Series $10,000 to win River Valley 40 event at the Speedway next weekend.

This will be the first Selinsgrove Ford Limited Late Model event of the 2022 season and as a result of multiple cancellations due to inclement weather, the drivers will be competing for an increased $2000 to win and $200 to start. Not only has the winner’s share been raised for the evening, but all positions throughout the A-main field’s payout have been doubled for the event and it features close to a $10,000 overall purse.

Devin Hart enters the season as the defending series points champion and many drivers will be looking to knock him off his perch as title holder in 2022. Shawn Shoemaker, Andrew Yoder, Todd Snook and Kenny Yoder as just a few drivers who are looking to improve on their 2021 performance in 2022. New to the series this season is a weekly $100 Hard Charger award courtesy of Dedicated Nursing Associates, Inc. for the driver who passes the most cars in the feature event.

As standard, racing will be broadcast via PPV on FloRacing and more information regarding subscription pricing can be found at www.floracing.com.

Stay tuned to our website www.portroyalspeedway.com and our various social media outlets for up to date information throughout the week and we look forward to seeing you at the track as we kick off the month of April Speed Palace style.