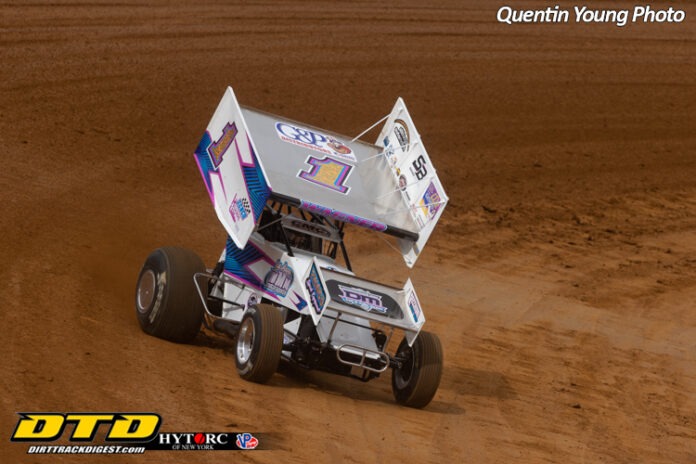 The win was worth $4000 and was a welcome sight for the four-time defending champion at the Speedway after last weekend saw him get upside down and and credited with a DNF.

“Hats off to my Zemco crew. We go from wrecking last week to being here in victory lane this week,” said Wagner. “Thanks to all my fans and all those who boo me. You’re all making noise and that’s what this sport is about.”

Wagner and his father, Mike Wagner, lined up on the front tow for the feature and it was the elder Wagner getting sideways and into the wall to bring out the caution on lap one. He was able to avoid contact with any other drivers and rejoined the field after changing a tire.

Wagner’s misfortune was Justin Whittall’s delight as he gained the outside front-row starting spot as a result of the caution and it was him leading lap one after a return to racing. Whittall jumped out to a lead of more then 1.2 seconds by lap five, but racing action was again halted for a car stopped in turn four with 20 to go.

Logan Wagner tried a slider on Whittall entering turn one of the restart, but couldn’t make it work. He tried again entering turn three, but Whittall was too fast off the top of the Speedway and was able to again lead the lap.

Six laps later, with Whittall now approaching the tail end of the field, Wagner was able to pounce. He regained the top spot and and used the lapped cars to his advantage to pull away from Whittall with ease.

“Justin was running a great race and he stayed up there longer than I expected,” said Wagner. “I kind of was waiting for him to fall off, but he gave me everything he had and it was great racing.”

Meanwhile, it was ninth-place starter Anthony Macri putting on a show for the fans. Macri was lurking just inside the top five near the halfway mark and by lap 20 he was able to get by Lucas Wolfe for the bronze spot on the podium. He then got by Whittall for the runner-up spot, but by then Wagner had built up too much of a lead.

At the completion of the 25-lap event, it was Wagner over Macri and Wolfe by a margin of 3.135 seconds. Whittall and Jeff Halligan rounded out the top five. Zeb Wise, Blane Heimbach, AJ Flick, Jared Esh and Justin Peck completed the top ten.

“I kind of anticipated the track might slick off a bit, but it stayed good for us and it was a great night,” said Wagner. “Everything just came together for us and we were able to make it work tonight.”

Following a week where Wagner and Macri made headlines on social media after getting together on the track, Macri believed it was meant to be to see them finish 1-2 this weekend.

“The car kept getting better as the race went on, but starting ninth you’ve got to get to the front quick to win,” said Macri. “I think we’ll see the Zemco car and us up front a lot this season and to run second to them is no slouch. He’s tough to beat and it’s been a good start to to 2022 for us.”

Colton Flinner earned his third consecutive win at the Port Royal Speedway to start the season and earned $3000 as a result of the triumph. The win not only continued what has been a torrid start to the season for the driver, but earned him a guaranteed starting spot in next Sunday’s Lucas Oil Late Model Dirt Series River Valley 40 event.

“I really don’t know what to say as we’ve struggled for years here and this has been a wild start to the season,” said Flinner. “I feel like I’ve matured a ton as a driver and we’re looking to prove it again next weekend.”

Defending track champion Dylan Yoder and Trevor Feathers lined up on the front row for the feature and it was Feathers gaining the point on the opening circuit. The caution flew after the completion of one lap for a spinning Brian Booze.

From there it was all Flinner by a mile. Behind him, Feathers, Yoder and Gary Stuhler were putting on a three-wide battle for the runner-up spot. Yoder eventually moved into the runner-up position.

Stuhler briefly gained the second position with just under five laps to go, but Yoder was able to capitalize on the lapped cars and his built up speed off the top line to move back into the spot for good with two laps to go.

Flinner worked his way through the lapped cars with ease and he went on to take the checkered flag by a dominating 7.7 second advantage over Yoder and Stuhler. Feathers and Austin Berry rounded out the top five. Ross Robinson earned the $200 Georges Used Cars Hard Charger after advancing from 14th to eighth.

“It feels good to know we are already locked in next weekend, but I’m looking to lock in anyways and make the fans proud next weekend,” said Flinner. “We have a lot of confidence in our program right now and I can’t wait to try again next week.”

For Yoder, it was a solid effort to come home runner-up, but still a disappointment for the defending track champion at the Speedway.

“It was a good start to the year for us, but we’d always like to be better,” said Yoder. “We’ve obviously got a little work to do to catch that 48 right now, but I think we all do the way they are running right now.”

Dillan Stake picked up the first Selinsgrove Ford Limited Late Model feature event of the season, which was worth an increased $2000 as a result of multiple rainouts from earlier in the year. The win was Stake’s fourth career in the division at the Speedway.

Defending track champion Devin Hart lined up on the front row alongside of Taylor Farling and it was Farling getting the early advantage. Farling led the first 11 laps of the event before giving way to fourth-place starter Matt Parks with 13 laps to go.

A caution with 7 laps to go bunched the field together once again and was the opportunity Stake needed to get himself into position for a shot at the victory.

Stake, who started ninth, had been struggling to get by Parks in lapped traffic. However, with clean clean air in front of him he was able to pounce. Parks lead the first two laps following the restart, but with five laps to go Stake and Parks made contact on the exit of the backstretch and allowed Stake to take the lead.

Parks struggled to regain momentum and with two laps to go, Stake had worked his lead already to over 2.0 seconds. Todd Snook, who started 13th, moved inside the podium as well, but Stake was not to be denied as he cruised home to the $2000 victory over Jared Fulkroad, Snook, Hart and Farling.

” Matt Parks and I live literally 15 minutes apart and I gave him all the room there to race for the lead,” said Stake. “It wasn’t intentional at all and it was just hard nosed racing. I can’t explain just how good this car has been since the end of last year.”