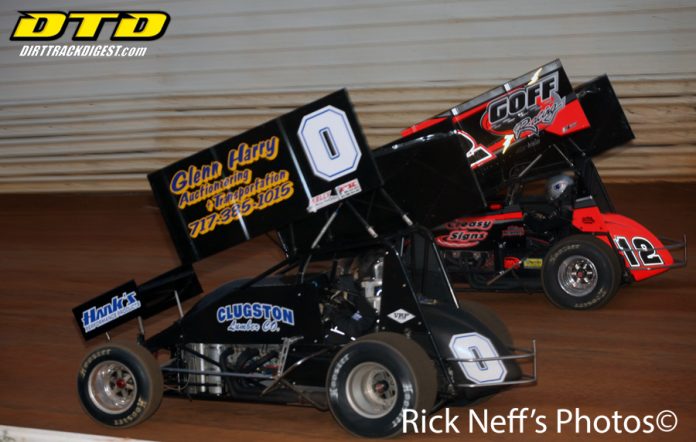 Kody Lehman and Lafferty led the field of 21 410 Sprint Cars to the green flag and it was Lafferty getting the early jump on the field to claim the top spot on the opening circuit. One lap later Heimbach, who started fifth on the grid, moved into the runner-up position and and seventh-place starter Mike Wagner, was up to fifth.

Wagner continued his march forward as he took fourth one lap later , but Mike Walter II regained the position on lap five as the two duked it our amongst reach other. Meanwhile, Heimbach was able to get by Lafferty for the top spot with 20 laps to go, but any opportunity to stretch his lead came to a halt one lap later when Tyler Reeser came to a slow on the frontstretch to regroup the field.

Wagner got back by Walter II for the fourth spot on the restart, while 11th-place starter Ryan Smith moved into sixth on lap eight. Also, Logan Wagner was making his move through as the field as the current track points leader had advanced from his 15th starting spot to ninth with 16 laps to go.

Lehman found something on the extreme high side of the Speedway and by lap 11 he was able to clear Lafferty for the runner-up spot and was closing quickly on Heimbach. Three laps later he got by him for the top spot exiting turn two, but Heimbach was able to get back by in turn’s three and four to hold onto the top spot.

Lehman tried the same move that worked for him again in turn’s one and two, but this time he got into the outside guardrail exiting turn two and had to get off the gas to regroup. This allowed Lafferty to slip back by and regain the second position.

Mike Wagner cracked the podium two laps later, while Lafferty was able to drive through the slick in turn’s three and four to take the top spot from Heimbach with eight to go.

Logan Wagner cracked the top five with five laps remaining and two laps later he moved into the fourth position as well. He was all over his father’s tail tank over the final three circuits for a podium position, but without a caution he wasn’t going to have anything for the top cars.

Heimbach was reeling in Lafferty slowly over the final two laps as the veteran driver up front dealt with lapped traffic, but Lafferty was not to be denied as he eased home for the victory and the checkered flag.

For the second consecutive weekend a division taking part in twin 20 feature events saw a driver sweep the night. Garrett Bard earned the first PennsValley MeatMarket PA Sprint Series 305 Sprint Car feature by capitalizing on a front row starting spot in the first A-main. Meanwhile, he had to start eighth in the second A-main after drawing the eight invert pill.

It only took two turns for Bard to get by pole sitter Fred Arnold in the first A-main and after that nobody had anything for the 305 Sprint Car standout. With 10 laps to go, Doug Dodson moved into the runner-up spot after starting sixth and held on to finish there as well.

Heffner and Duke lined up on the front row for the second twin 20 A-main event and it was Heffner getting to the lead on lap one. By the completion of the lap one though, Bard was already up from eighth to third inside the podium.

Lapped traffic played a part at the halfway point and three laps later Heffner, Duke and Bard were all three-wide down the backstretch battling for the top spot. Bard came out of the battle in second behind Heffner, but it only took one more circuit for Bard to get by Heffner and gain the top spot yet again.

A caution with two laps to go gave Heffner a shot to steal the win, but his slide job attempts were not good enough to best Bard as he cruised home to the victory over Heffner, Duke, Arnold and Roger Irvine. Larry McVay, Tyler Snook, Logan Spahr, Mike Melair and Reed completed the top ten.

Trent Brenneman picked up the Selinsgrove Ford Limited Late Model feature win over Ryan Zook and Dillan Stake in the first of two scheduled feature events for the divisions after starting third on the grid. Meanwhile Stake earned his fourth win of the season in the division during the second feature event, which was a make-up feature from earlier in April.

Fourth-place starter Zook quickly rocketed to the front of the field in the first feature event to lead the opening laps and with 15 laps to go Brenneman had moved into the second spot and was lurking.

As Zook battled heavy lapped traffic, Brenneman was closing fast and with seven laps remaining the two were nose-to-tail coming to the flagstand. Four laps later Brenneman made his move count and he got by Zook for the point.

He was able to cruise home to the victory over Zook, Stake, Shawn Shoemaker and Kevin Probst. Devin Hart, Daulton Bigler, Todd Snook, Taylor Farling and Derick Garman rounded out the top ten.

Jared Fulkroad led the first lap of the make-up feature before giving way to Snook on lap two. Snook lead the next seven laps before Stake was able to get by coming to the line for the top spot. From there it was all Stake as he cruised home for the victory.