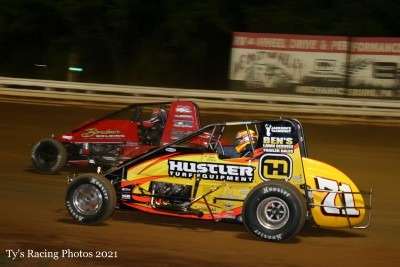 This will be the series’ 11th attempt at visiting the Speed Palace as eight events have been held and two were lost as a result of weather and the Covid-19 outbreak.

The annual wingless event will pay $6000 to win and also features the Winged Sprint Cars competing for $5000 to win. This will be a first ever visit to the track for the Silver Crown Sprint Cars, who will be vying for an $8000 prize, and has only further ensured this season’s Eastern Storm visit will be one of the most highly anticipated visits in recent memory to the Speedway.

In Weikert’s Livestock 410 action, Rick Lafferty enters the weekend as the most recent winner in the division as he held off Blane Heimbach and Mike Wagner last weekend.

Logan Wagner sits on top of of the series’ point standings in his drive for five consecutive championships and he holds a 210-point advantage over Jeff Halligan. Mike Wagner (-225), Lucas Wolfe (-235) and Justin Whittall (-465) complete the top five.

The USAC Silver Crown Champ Car Series is one of the most historic and prestigious series in all of open wheel competition and list some of the greatest drivers in the history of the sport as past champions. This season marks their first-ever appearance at the Juniata County oval.

Kody Swanson enters the weekend as the leader in the series point standings and he holds a narrow 3-point advantage over second-place Logan Seavey. Justin Grant (-15), CJ Leary (-15) and Brian Tyler (-46) make up the rest of the top five.

Adding to the intrigue of the event will be a special pre-race Driven2SaveLives ambassador meet and greet with Emerson Axom in the commercial building located behind the main grandstands. The event will take place from 2-4:00pm and will see Axom meeting with fans with his Clauson Marshall Racing No. 47BC car on display, along with several giveaways, raffle items and more! To attend the event you will need to sign up as an official ambassador and present your credentials, which can be done by signing up online at https://driven2savelives.org/ambassador-signup/ and is free of charge.

For updated news an d information make sure to visit www.portroyalspeedway.om and stay connected via our various social media outlets on Facebook and twitter.