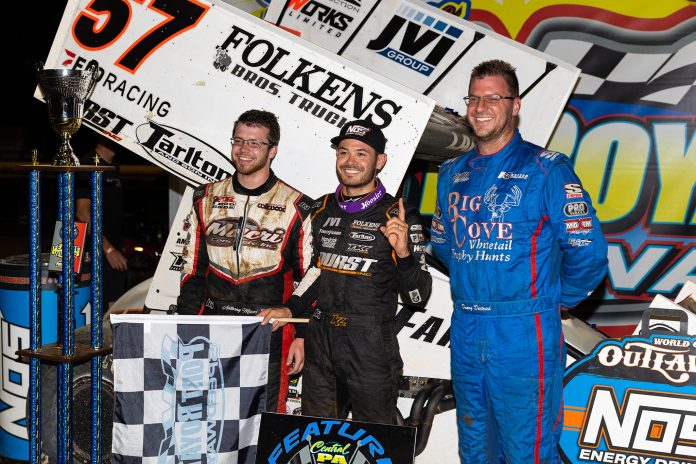 In one of the most dominating performances of the season, the Elk Grove, CA native controlled all 30 laps without challenge and crossed the finish line ahead by 2.799-seconds. It’s his fourth win of 2022 with Paul Silva on the wrenches of the HendrickCars.com #57, and the 28th of his career with The Greatest Show on Dirt.

However, The Speed Palace still found a way to present Larson with several challenges throughout the night. He was dealt a thrilling battle with Carson Macedo for the Heat Race win, a side-by-side contest with Donny Schatz for the Dash victory, and then was forced to fight through lap traffic up to 15th in the Feature.

“I feel like I did a decent job in traffic, but then I got stuck in for like five-six laps and got pretty nervous,” Larson admitted. “I saw Danny [Dietrich] was up to second on the board and I’ve seen him roll the inside wall here before, so I was trying to keep my eye on that. My car was just phenomenal all night long. We had to pass to win the Heat and pass to win the Dash, so I knew we would be good for the Feature.”

Behind Larson, the PA Posse defended their home turf in impressive fashion with six of the top-10 finishers coming from local racers. Danny Dietrich, Anthony Macri, and Brent Marks combined to place the highest-finishing full-time World of Outlaws driver in fifth place for Sheldon Haudenschild.

Only four days removed from a nasty crash at Eldora’s Kings Royal, Dietrich was never certain that he would be finished with rebuilding the Gary Kauffman Racing #48 in time for Port Royal. However, the Gettysburg, PA native and his crew thrashed enough to get the job done and head to the track on Wednesday. Their reward for all the hard work was a season-best runner-up result against the World of Outlaws.

“Man, I’m feeling pretty good here,” Dietrich said with a smirk. “Our truck is in the shop right now, so I’ve got to thank the Weikerts for getting this rig up here. We had to tear the other car apart and get this one built off the upper deck, so it’s been a tough few days on my guys. It would’ve been pretty easy to take the night and enjoy a break, but we’re here and I’m glad we stuck it out.”

Rounding out the podium on Wednesday was Dillsburg, PA native Anthony Macri with a ninth-to-third drive aboard the #39M. The Concrete Kid rallied well as the night progressed to earn his sixth-career World of Outlaws podium finish on the heels of a change at crew chief. He’ll get his next shot at that elusive first-career World of Outlaws victory this weekend at Williams Grove.

“Maybe this car is just as good without an old crew chief as we are with the current situation,” Macri said to stir the crowd. “We were going off the notebook tonight and throwing ideas off each other. We probably should’ve been more aggressive to start the night, but once I got into a rhythm I knew we were fine. I would’ve liked to see a caution, but the cookie just didn’t crumble that way.

King Brent XXXIX finished fourth from 10th, while Sheldon Haudenschild earned the mark of highest finishing World of Outlaws full-timer in the fifth spot aboard his NOS Energy Drink #17.

A group of five PA Posse stars recorded their season-best effort against the World of Outlaws on Wednesday. All finishing inside the top-10 was Danny Dietrich (2nd), Anthony Macri (3rd), Jeff Halligan (6th), Lance Dewease (7th), and Devon Borden (9th).

Donny Schatz earned his first QuickTime Award of the season, topping My Place Hotels Qualifying at 16.717 seconds around Port Royal for an average speed of 107.244 MPH. It’s the 108th QuickTime of his World of Outlaws career.

UP NEXT (Fri-Sat) – The World of Outlaws and PA Posse will continue Sprint Car Racing’s favorite rivalry this weekend with a doubleheader at Williams Grove Speedway in Mechanicsburg, PA on Friday and Saturday, highlighted by the $20,000-to-win Summer Nationals finale. Fans can BUY TICKETS HERE, or watch every lap LIVE on DIRTVision.