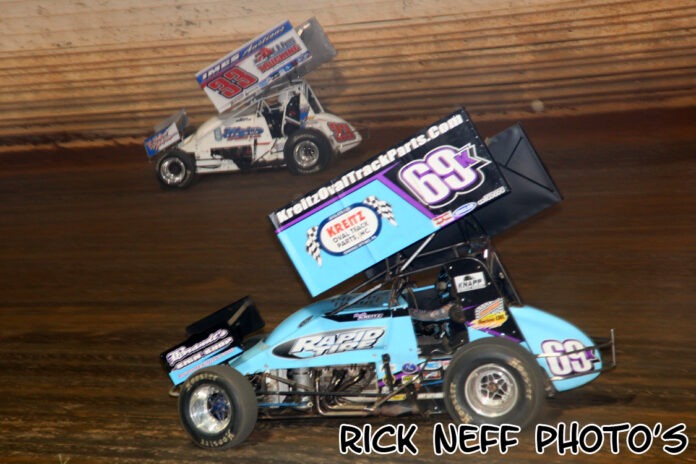 The win was worth $4000 and came over a hard charging Jeff Halligan and Blane Heimbach.

Tyer Reeser, making his first start behind the wheel of the Aaron Long owned Steve Smith tribute No 19t, and Kody Lehman led the field of 24 Sprint Cars to the green flag and it was Lehman getting the early jump on the field to lead the opening lap. McIntyre, who started fourth on the grid, settled into second followed by Devon Borden.

Eighth-place starter Heimbach was a man on a mission early as he cracked the podium on lap two, while McIntyre only needed one more lap to dispose of Lehman to take the top spot with 22 laps remaining.

Borden and Heimbach battled it out for the final podium position, with Borden claiming the spot on lap four and three laps later he wheeled the Stehman/Shuttlesworth Racing No 23 into the runner-up position. Heimbach followed suit to grab the third position on the following lap from Lehman.

One lap later it was ninth-place starter Halligan cracking the top five, while the leaders were starting to close in on lapped traffic with 15 laps to go. Borden remained hot and heavy on the tail tank of McIntyre over the next five circuits before he pulled the trigger and slid in front of the leader in between turn’s one and two.

It appeared that Borden was going to be the new leader, however the move didn’t stick and he made contact with the outside guardrail and got turned around to bring out the caution and give to spot back to McIntyre.

Dietrich remained steady in his pursuit to the front as he cracked the top five for the first time with eight laps remaining, while McIntyre was approaching lapped traffic again.

Heimbach and Halligan were starting to chip away at McIntyre’s lead, which was slightly more than a 1.4 second advantage with five laps remaining. Dietrich was making himself part of the picture as well as he moved into fourth with four laps remaining.

The top four all raced in and out of lapped traffic and it appeared it would be McIntyre claiming the victory with little challenge after he took the white flag, but ninth-place running Logan Wagner came to a stop exiting turn four with a flat right-rear tire to set up a one lap battle for the win.

McIntyre led the field of hungry drivers back to the green flag and while Heimbach was primed to make a move for the lead, it was Halligan thwarting his efforts as he got around him in turn’s one and two on the outside to grab the runner-up spot. The battle for second allowed McIntyre the space he needed to breathe a little easier and he cruised home for the victory behind the wheel of the No. 33 car that’s only housed a block from the Speedway.

The Krill Recycling, LLC Super Late Model and PennsValley MeatMarket PA Sprint Series 305 Sprint Car portion of the night’s event were lost as a result of significant rain showers that hit the Speedway after only four laps of the Super Late Model A-main.

The 305 feature event will be made up in two weekends when the series returns to the track as part of Military Appreciation Night on August 20th, while the Super Late Model feature will be made up on the Friday night opener for the Lucas Oil Late Model Dirt Series Rumble By the River on August 26th.