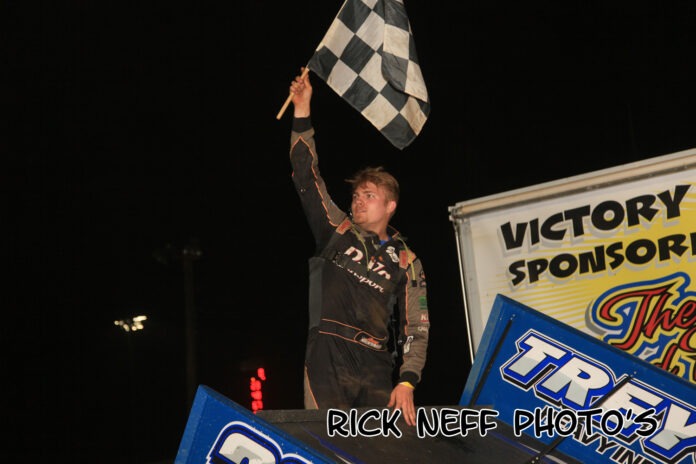 The win was Satterlee’s second of the season at the Speedway and was worth a race-record $7,333 in memory of the legendary Renninger.

Satterlee lined up from the pole position alongside of Berry and it was Satterlee getting the early jump to lead the opening lap. Third-place starter, Ferree, settled into the runner-up spot followed by Berry, Norris and Eckert.

Little changed over the opening 11 laps of the 33-lap feature event, until Jared Miley came to a slow exiting turn two to bring out the caution.

While Satterlee remained steady up front following the return to green-flag action, Berry was the benefactor of the restart as he slid by Ferree for the runner-up spot.

It only took two more laps for Norris to dispatch of Ferree for the final podium spot and the driver of the No. 72 set his sights on Berry. Just past the halfway mark Norris made his move on Berry for the runner-up position and with 10 laps to go the margin between him and Satterlee was just 1.138 seconds.

Norris closed the gap several times over the final ten circuits, but Satterlee kept opening the distance throughout lapped traffic.

When the checkered flag dropped, Satterlee held a 1.552 advantage over Norris and the only thing left to do was to take a trip to victory lane to celebrate with the Renninger family.

Several other driver incentives were paid out thanks to various sponsors and the hard work and dedication of the Renninger family.

The Limited Late Model Butch Renninger Memorial victory was worth $4,333, which was the second highest paying winner’s share for the event in the history of the event.

Stake and Matt Parks lined up on the front-row for the event and it was Stake getting the jump on the field. However, it only took two turns for Moore to make his presence known as he jumped from his third starting position to claim the lead on the opening lap.

That was all Moore needed as he cruised the rest of the way. Stake stayed steady behind and was ready to pounce at any mistake, but Moore made all the rights moves through lapped traffic on the way to the victory.

Yoder and Hart put on a great battle behind the front two for the final podium position, and it was ultimately Yoder grabbing the position.

The win was worth an increased $5000 as part of the Juniata County Fair opener and the feature event went non-stop.

Rick Lafferty and Borden lined up on the front-row, but it was third-place starter, Brian Brown, using an inside move in turn’s three and four to pull ahead of Borden by a nose coming to the flagstand on the opening circuit.

Sixth-place starter, Danny Dietrich, moved into the top five on lap three, while Whittall got by Borden for the runner-up spot as well. Dietrich continued his march forward as he took fourth on lap five and two laps later Brown was busy in lapped traffic up front.

Dietrich moved past Brown for the final podium spot one lap later, while Borden had already opened up a 1.850 second advantage over Whittall. With ten laps remaining, Borden had stretched the lead to 4.057.

Whittall cut the distance nearly in half with six laps remaining, but he gave up the runner-up spot to Dietrich with four laps to go. That was as close as he’d get though, as Borden crossed under the checkered flag to give his new Shuttlesworth-Stehman Racing their first win as a team.