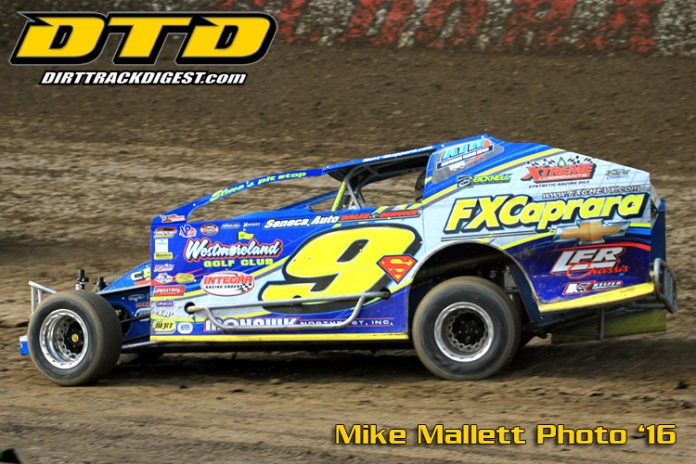 OAKS, PA – Matt Sheppard, who turned the most potentially adverse moment of his driving career into the most productive season of his life, will be among the honorees on Saturday, January 21, 2017 at the Pioneer Buildings Motorsports Race Car & Trade Show in Oaks, Pa.

Sheppard will be recognized at Motorsports for winning 29 feature races in 2016, five more than any other driver in the Area Auto Racing News readership area. Each of the wins were in the Dirt Modified category.

“I didn’t have a lot of time to put a team together,” Sheppard remarked of the organization he and his supporters formed after his release from HBR Racing in early December. “I hadn’t planned on being a driver-owner but it has worked out pretty well I’d say.”

Sheppard, of Waterloo, N.Y., will receive a check at the Motorsports Show for $200 as a divisional winner and $500 for the overall Northeast winners.

Asphalt Modified driver Keith Rocco, on the strength of fifteen 2016 wins, is the Northeast winner in that category, Rocco, of Wallingford, Ct., earned a total of 23 features in 2016, with his 15 asphalt Modified wins the standard in that bracket. He also won seven asphalt Late Model races Rocco will receive $200 from Area Auto Racing News.

Mike Sweeney, asphalt Late Model specialist of Nesquehoning, Pa. topped all others in the AARN readership with nine features and will receive $200 from Area Auto Racing News for that achievement.

Two other Top Northeast winners will be unable to attend the Motorsports Show for the best possible reason: they will be racing.

Dirt Late Model standout Max Blair, Titusville. Pa., won twenty Dirt Late Model features in 2016, fifth overall over the AARN readership. Blair will be ‘on the road’ during the Motorsports Show, in route to Dirt Late Model races beginning the next week in Georgia and Florida.

And Central Pennsylvania 410 Sprint star Greg Hodnett of Thomasville. Pa., is already racing Sprint cars, in Australia where he will remain until early February.

Sheppard, Rocco, Sweeney and Walton will meet and greet race fans at the Area Auto Racing News Booth No. 224 beginning at 5:00 p.m. and running through 6:00 p.m. Each will sign the annual Motorsports Show commemorative Top Northeast Winner color poster and pose for pictures with admiring fans.

The Northeast Top Winners will be interviewed on stage prior to the 2017 Ms. Motorsports pageant on Saturday beginning at 7:00 p.m. Commemorative plaques and checks will be presented on stage by members of the Area Auto Racing News staff.

The Pioneer Pole Buildings Motorsports 2017 Race Car and Trade Show is set for January 20th through January 22nd, offering just about everything imaginable in motorsports, takes place at the Greater Philadelphia Expo Center in Oaks, PA.

Loads of information on the show can be found at www.aarn.com and hit the Motorsports link.