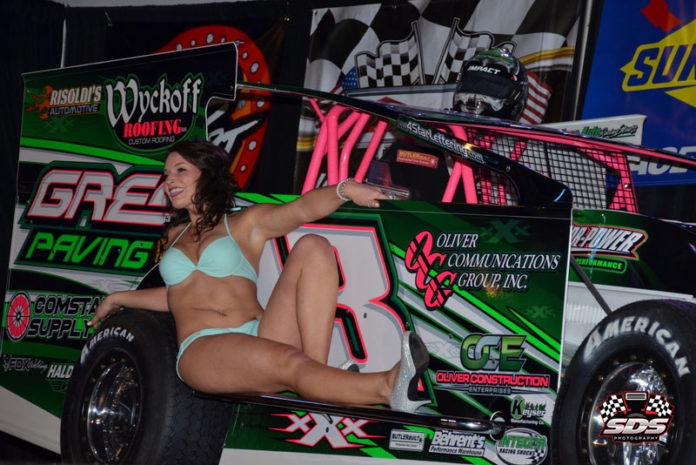 OAKS, PA – A massive crowd swamped the Greater Philadelphia Expo Center on Day Two of the 2017 Pioneer Pole Buildings Motorsports Race Car & Trade Show on a day highlighted by the crowning of Taylor Albert of Annville, Pa., as Ms. Motorsports 2017.

The new Ms. Motorsports finished ahead of Lauren Fischer and Caitlin Puccio to claim the title.

“It’s a dream come true,” said Ms. Albert, a winner in her first Ms. Motorsports pageant over a field of fifteen entrants.

Preceding the crowning of Ms. Motorsports, Len Sammons presented the annual Joe Pratt Award Of Excellence to John Doebling. Doebling, of Phoenixville, Pa., was a longtime friend of the late Joe Pratt and has embodied the virtues Pratt exhibited.

“Joe was a very dear friend of mine,” Doebling said. “I met him through Quarter Midget racing and when the Motorsports Show started, Joe encouraged me to become involved. That over thirty years ago,” an emotional Doebling said.

The huge crowd at Motorsports 2017 on Day Two was attributable to the first appearance at the Show since 1988 of NASCAR Legend Richard Petty and rising star Jeffrey Earnhardt. Each mingled with Motorsports attendees and signed autographs for more than two hours each.

“I’ve seen some of the guys I raced against at Dorney Park thirty years ago for the first time since the Park closed,” said Sportsman and Late Model standout Bob Becker.

Taylor Albert will also be at the Motorsports 2017 Show, meeting and greeting the public on the first day of her official reign.