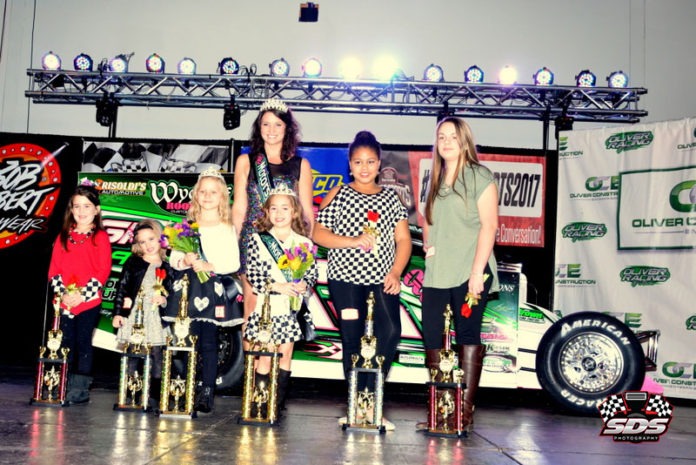 OAKS, PA – The third day of huge crowds filed into Greater Philadelphia Expo Center in Oaks, Pa., on a day that featured free admission, pageants and races for children and the first day for Ms. Motorsports, Taylor Albert, to meet and greet the public.

Taylor had a busy day. She first visited the booths that had received Awards Of Excellence from the Motorsports Show staff, then was among the pageant judges for the Little Ms. And Tiny Ms. Motorsports competitions.

Kids Big Wheel races produced a fascinating result when all three A-Main winners were related to one another. Bowen Pickell won the three-to-four feature, Brian Pickell the five-to-six main event and Lane Anderson the seven-to-nine headliner. Lane is Bowen and Brian’s step brother.

A total of sixty-one entries were received among the three classes.

Awards were presented to exhibitors whose displays or race cars were judged to be the most outstanding of the 2017 Motorsports Show.

Exhibitor enthusiasm was palpable as the PPB Motorsports Show wound down Sunday afternoon.

“This was an excellent show for the R.A.C.E foundation,” Brad Brickel, Jr. said. “We were able to get our message out to thousands of people.”

Beyea Custom Headers owner Joe Beyea was very happy with the Show. “This is the first time we have been at Motorsports in about three years. Our business was in the process of expanding and we couldn’t find the time to do the Show. Now that our market has gotten much broader, the Motorsports Show was perfect for us. I got to meet a lot of people I had only talked to before. That’s great for business.”

Motorsports Show program books were completely sold out one hour after the Show opened Sunday morning. Souvenir T-Shirts were in short supply in popular sizes.

Len Sammons Motorsports Productions has already put plans into motion for the 33rd annual Motorsports Show, with dates set for January 19 through 21, 2018.