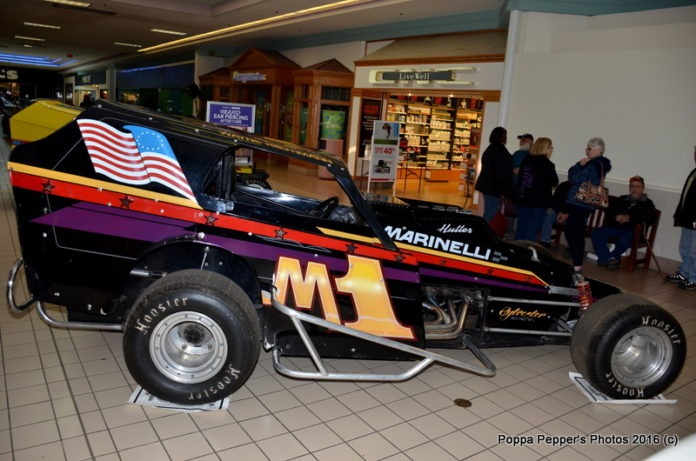 The tentative schedule for the popular tenth edition of the week long Quaker Steak & Lube Dirt Track Heroes Show is now confirmed for 2017. The successful event will once again begin its week long run at the Phillipsburg Mall located off Route 22 East in Phillipsburg, New Jersey. Opening day is set or Sunday, March 5th with a salute to all of the racetracks and a special emphasis on the great racing that took place at the speedways located in Nazareth, Pennsylvania, including the half mile and both the paved and dirt versions of the larger National speedway and the Dorney Park Speedway. Highlighting opening day will be special tributes to Modifed and

NASCAR star Tighe Scott and Author/Publisher Lew Boyd who has written many books including the “Paved Track/Dirt Track” publication. Both will be signing autographs and Lew will also be selling his book that day.

The upcoming show encompasses the majority of the local short track scene and will continue through Saturday night, March 11th. In announcing the tentative schedule organizer Bob Miller stated, “We have enjoyed a great run with this show and the schedule will pretty much be in sync with what we have done in the past but with special emphasis on cetain drivers who built the foundation of the sport as we know it today. We have worked out an exciting and diverse schedule aimed at being fan, driver, sponsor and
organization friendly and once again look forward to a great show in Phillipsburg.” Miller further added, “With this being the tenth year of doing this show, the solid support from the sponsors, fans, all of the historical racing groups and current day speedways has made the event a special occasion for all of us involved with the production of this great show.”

Quaker Steak & Lube, or The Lube(r) to loyalists, the award-winning casual dining concept known for its Best Wings USA and over 25 signature sauces, is fully prepped and geared as the lead sponsor for the annual event. The original restaurant was built in 1974 in an abandoned gas station, decorated with license plates and old muscle cars. Originally a”cook-your-own-steak”establishment, The Lube’s signature dish is now its fabulous chicken wings and the wide variety of sauces used to season them. The Pohatcong Township
(Phillipsburg, NJ) Quaker Steak & Lube is located at 1304 US Route 22, Phillipsburg, NJ, and welcomes all race fans and families to stop by their location when visiting the New Jersey area to be re-charged and re-fueled before or after the show.

The excitement for the upcoming show is at a fever pitch as Bryan Youngans, Marketing Manager of Quaker Steak & Lube stated, “We are once again excited to sponsor and be part of the Dirt Track Heroes Car Show. The event is extremely popular and even though the event is still five weeks from now we feel the excitement building from within as there is a constant buzz about the event at Quaker Steak & Lube.” Youngans further added, “Our involvement with a show of this magnitude is a natural fit for us as our restaurants
recognize and salute the racing heroes of the past, present and future. We look forward to showcasing our Quaker Steak & LubeRestaurant at the 2017 event and becoming more involved with the show and local racing action in the future.”


The Phillipsburg Mall has proven to be a popular setting for this special event and will once again offer many varieties of new and vintage race cars, racing memorabilia, collectibles and photos on display throughout the Mall for the duration of the show’s run. The nine previous shows have brought race cars from all divisions of motorsports filling the Mall space and highlighted in a week long show celebrating the love each of us has found in attending races and meeting so many wonderful people associated with the
sport. With an exciting and diverse schedule of events to whet the appetite of any true race fan, large crowds are expected to flock to the show to fill the wide walkways of the Phillipsburg Mall for the upcoming tenth edition ofthe show.

All historical racing groups including Flemington, Tri State, Nazareth, Reading and Harmony will have their memorabilia on display and their many scrapbooks open for the fans to take another long look at the glory years of racing and possibly find a picture or two they want to purchase as a keepsake from past glory or racing exploits. The show has remained FREE to the public as it has been since first landing at the Phillipsburg Mall ten years ago.

Cars on display will include big block and small block Modifieds, Sportsman, all divisions of Micro-Sprints, ARDC Midgets, all divisions of Sprint Cars, Slingshots, Stage One Modifieds, X-Cel Modifieds, Late Models, SpeedSTRS, Drag Racing Cars, Go-Karts and a broad variety of vintage and restored race cars. New Egypt, Bridgeport, Hamlin, Accord and Snydersville will again be among the many speedways involved with the 2017 edition of the show.

The week-long event will set aside one evening to salute the “Stars of Tomorrow” with a special night for the budding young racing talents competing with the many quarter midget clubs in the area and this night has proven to be one of the highlights of the week as many of the youngsters will be giving their first ever interviews to a large crowd.