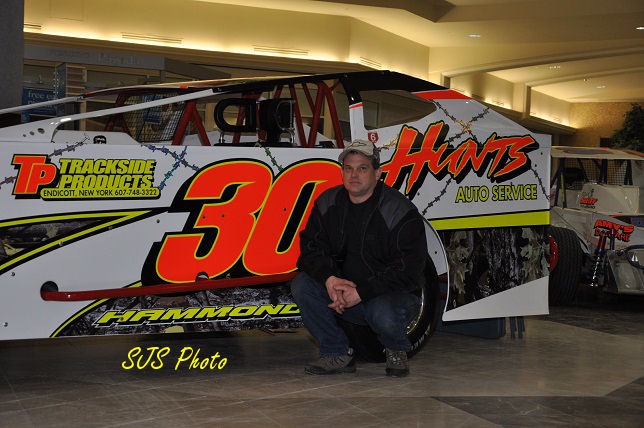 The 2017 Southern Tier Speedworld Show, presented by Mike and Michelle Stolarcyk Cars and Trucks, is coming up soon. The show will take place March 3rd through 5th at the Oakdale Mall in Johnson City, New York.
Race Cars and Trucks as well as Drag Cars and more will be joined by the area Race Tracks for the annual lid lifter for the 2017 racing season. The show is always filled with a wide variety of racing divisions and disciplines and this year will be no exception.
Entry forms are available at Doug’s Speed Shop, French’s Auto Parts on Court St. in Binghamton and 07 Racing Collectibles in Endwell. The entry fee for a full size car is $40 if submitted by February 22nd. The fee is $50 after the 22nd. The entry fee for small cars (Microds, Micro’s, Go Karts, etc…) is $30 prior to February 22nd and $40 after. No entries will be accepted after February 28th.
Awards will be presented to the best appearing cars in each classification, as selected by the participants themselves. Each entrant will receive a ballot and will choose the best appearing cars in each division. The votes are tallied on Sunday afternoon and the winners will be presented on the Village Train and Hobby Center Stage on Sunday night.
There will be plenty of activities taking place over the weekend. On Friday night the top drivers in the 2016 STAR Series Standings will receive their point fund money. The traditional Saturday Night Live will take place on Saturday where drivers and track operators will all have the opportunity to tell the fans about their plans for the upcoming season.
Grant Buck and Gary George will be spearheading a Nostalgia Area at the show where former drivers will be on hand to sign autographs. More details will be forthcoming in the coming days.
The show is once again presented by Mike and Michelle Stolarcyk Cars and Trucks in Whitney Point, New York. They have supported the show since its inception and have been long time supporters of local auto racing. Visit them at their new location on Route 11 in Whitney Point or check them out online at stolarcykpreowned.com.
French’s Auto Parts, B&D Exhaust, Schneider’s Market and 07 Racing Collectibles will also return as associate sponsors of the three day show. They have all been long time supporters of the show.
It’s almost time to shake off those winter blues and get ready for the start of the 2017 racing season by visiting the Southern Tier Speedworld Car Show at the Oakdale Mall in Johnson City. Mark your calendar for March 3rd through the 5th and enjoy the show.