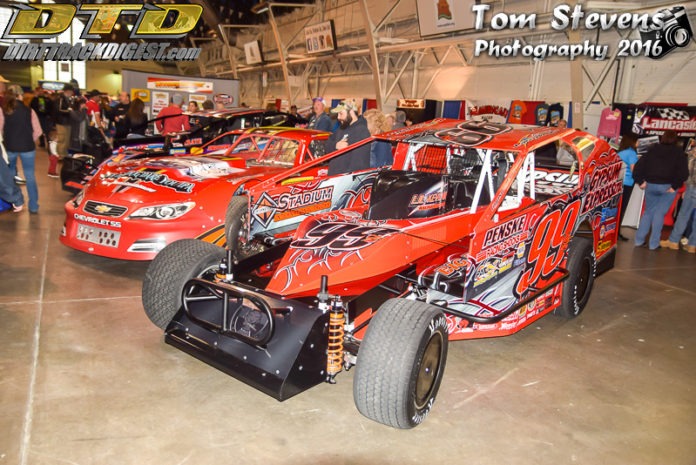 Principals of Motorsports Expo 2017 and Insinger Performance Sunoco Race Fuels have announced an agreement that finds the Dushore, Pa. based distributor of Sunoco Race Fuels a major sponsor of the 2017 edition of Motorsports Expo. The much anticipated event takes place over the weekend of March 11th and 12th, 2017 at the Center of Progress Building on the New York State Fairgrounds. “We have always tried to be involved in this show” said Bruce Insinger.

“We service a lot of racing facilities and series in New York State, so it is a good fit for us to be a part of this show and help to bring people through the door. Not only for the racers, but also for the fans who have chosen Sunoco as their Convenience stop of choice. It is all part of our ongoing effort to support the racing community, both the race teams and fans.”

Over its 31 year history, Motorsports Expo has grown into the largest Motorsports themed exposition presented in New York State. The much anticipated event is celebrating its 31st anniversary this season with what is shaping up to be the biggest and best show in the event’s history. Motorsports Expo 2017 will open to the public on Saturday, March 11th with public hours from 10AM-9PM. On Sunday, March 12th, the show hours are 11AM-4PM. Set-up will take place on March 10th as vendors and participants will be getting everything ready for the official show opening on Saturday morning.

More than 300 race teams are expected to converge on Syracuse for the weekend, proudly displaying their new creations and allowing fans to get a close-up view of their equipment prior to taking to the various area speedways in the weeks following the show. While the emphasis of the show is geared heavily toward short track oval racing both asphalt and dirt, just about every form of Motorsports is represented at Motorsports Expo 2017. Several of the local Microd and Quarter Midget clubs take part, as some of the sport’s youngest drivers and their families spend the weekend proudly showing off their new rides. For the nostalgia buffs, there will be several restored cars from back in the day, many with very deep historical significance, on display. Those who prefer to do their racing on two wheels are also represented with several racing motorcycles on display along with some great looking drag cars as well. Pulling trucks and tractors, Monster Trucks, Mud Bog racers and many other different types of racing are represented as well, as there is truly something for everyone at Motorsports Expo 2017.

Many area speedways and sanctioning bodies will be on hand with booths set up to promote their rapidly approaching racing season. With the Expo taking place just before the season opens, Motorsports Expo 2017 represents a golden opportunity for speedways and sanctioning bodies to promote their upcoming events to a packed house of race fans. Many will have their 2017 season schedules finalized and will have schedule cards and other pertinent information ready to distribute to both race teams and fans. Motorsports Expo 2017 also represents a golden opportunity for racers, fans and promoters to talk on a one to one basis in a relaxed atmosphere, something that is sometimes not possible during a busy race night. With a building full of race-starved fans, speedways and sanctioning bodies have the chance to not only re-establish relationships with current fans, but cultivate some new ones as well.


A variety of vendors will also be a part of Motorsports Expo 2017. Show vendors annually bring a wide variety of merchandise to the show with a great variety of products ranging from the latest must-have speed equipment for the race teams to souvenirs and apparel of every type imaginable for the race fans. Vendor space is already being reserved with last year‘s participants being given the option to retain their same space from 2016.

This years event is shaping up to be the biggest ever with the cars and stars from all kinds of racing on hand. Management is encouraged by all the early phone calls to date. Be a part of the best racing has to offer and come back to the New York State Fairgrounds on March 11th and 12th and take advantage of being first to know what is happening at the race facilities for 2017!

Display space is currently filling up fast, so those teams, tracks, series, and vendors planning to take part should finalize their plans and get their entry forms filled out and submitted as soon as possible. Once all space is allocated, late entries will be placed on a waiting list and will be called upon as needed should previously entered teams cancel. All necessary entry forms and up to date show information is available at www.gaternews.com. For assistance, call the show office at 315-378-8003 during regular business hours. Please note that this is a different phone number from previous years.