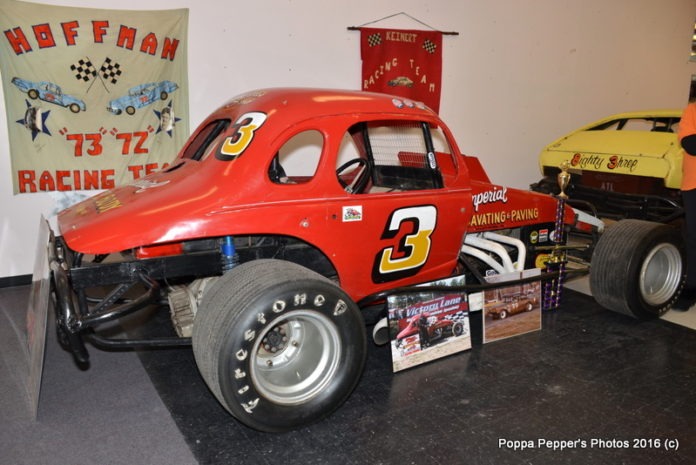 The dates for the popular tenth edition of the week long Quaker Steak & Lube Dirt Track Heroes Show have been confirmed for 2017 and the hard-working show staff and the many historical groups and speedways are putting all of the necessary pieces in place to produce another great show. The successful event will once again begin its week long run at the Phillipsburg Mall located off Route 22 East in Phillipsburg, New Jersey beginning on Sunday, March 5th and will run through March 11th. The upcoming show encompasses the majority of the local short track scene and has become a must go to event for the local Tri-State area.

Quaker Steak & Lube, or The Lube(r) to loyalists, the award-winning casual dining concept known for its Best Wings USA and over 25 signature sauces, is fully prepped and geared as the lead sponsor for the Tenth Annual Dirt Track Heroes Car Show. Quaker Steak & Lube, which opened in Phillipsburg, New Jersey in August of 2014, has been extremely pleased with the excellent results and the great feedback they have received since partnering with the popular annual racing oriented show. The Pohatcong Township (Phillipsburg, NJ) Quaker Steak & Lube is located at 1304 US Route 22, Phillipsburg, NJ, and welcomes all race fans and families to stop by their location when visiting the New Jersey area to be re-charged and re-fueled.

IRCO Community Federal Credit Union will once again lend their solid support to the popular show. IRCO was formed in 1966 and has grown in leaps and bounds to it’s present state today. IRCO serves over 8,000 members with assets exceeding $73,000,000. IRCO remains a locally-owned and staffed community financial institution. Greg Collins, vice president at the Phillipsburg, New Jersey based IRCO Community Federal Credit Union as well as the noted historian of the Harmony Speedway remarked, “As we countdown to the opening day of the show, IRCO and myself are extremely happy with all of the response for the upcoming show. When we started this event back in 2008 we had no idea where we were going but were aware of many good people wanting to be involved.” Collins further added, “The nucleous of good people along with great sponsors, has fueled this event to a must see event. We are overjoyed to once again play an integral part in the success of the Dirt Track Heroes Show.”

The Quaker Steak & Lube Dirt Track Heroes Show is pleased to announce its support of Saint John’s Angels, a Phillipsburg based American Cancer Society Relay for Life Team. Team members will be present throughout the duration of the week long show sellng baked goods and purple ribbon-branded Relay for Life merchandise in support of their participation in the Phillipsburg area’s Relay for Life event to be held Saturday, May 20th. This annual event will be held at the Maloney Stadium right off of Route 22. The Saint John’s Angels team has participated in this long-standing event since 2003.

The restored race cars represent racing’s past or what many race fans refer to as the “Golden Era” of auto racing. The great spirit of the event takes the great fan base of racing back to a special time in their lives when they could hop into their family jitney and travel less than a half hour to witness the excitement and spectacle of a night at the races. Some of the cars in attendance will be original works, some of the race cars are replicars of famous cars re-created to look much like the racers the legendary drivers drove to glory at one of the many speedways that hosted racing events. The great cars and the preserved memories gain far more impact when the fans have the opportunity to chat with many of the legendary drivers who will be making special appearances at the Mall during the week long event. All historical racing groups including Tri State, Flemington, Nazareth, Dorney Park, Harmony and Reading will have their memorabilia on display and their many scrapbooks open for the fans to take another long look at the glory years of racing and possibly find a picture or two they want to purchase as a keepsake from past glory or racing exploits.


Current day race cars are displayed by race teams to gain fan exposure and interest for themselves and their sponsors and create the “buzz” for the mall walkers to visit a race track in their immediate area. The cars are displayed to also exhibit the new and changing technology associated with racing and with the many restored race cars on site, depicts the evolution of the many eras of racing ingenuity. The fans can visit the Dirt Track Heroes Car Show and on any given night, meet the guys and gal drivers who pilot these four-wheel high-powered race cars. The show remains absolutely FREE to the public as it has been since first landing at the Phillipsburg Mall ten years ago.

In previous events, cars on display included big block and small block Modifieds, Sportsman, all divisions of Micro-Sprints, Midgets, all divisions of Sprint Cars, Slingshots, Stage One Modifieds, X-Cel Modifieds, Drag Cars, Late Models, SpeedSTRS, Go-Karts and a broad variety of vintage and restored race cars. Hamlin, Mahoning, Snydersville, Accord, New Egypt, Brudgeport and Snydersville will again be among the many speedways involved with the 2017 edition of the show. The week-long event will set aside one evening to salute the “Stars of Tomorrow” with a special night for the budding young racing talents competing with the many quarter midget clubs in the area and this night has proven to be one of the highlights of the week as many of the youngsters will be giving their first ever interviews to a large crowd.

The Dirt Track Heroes Car Show will again offer a great tribute keepsake event souvenir program book and apparel. The Phillipsburg Mall is open Sunday 11 AM to 6 PM; Monday through Saturday from 10 AM to 9 PM. For Quaker Steak & Lube Dirt Track Heroes information, contact show organizers Bob and Donna Miller by phone at: 443- 513-4456, via e-mail at: TOTHILL98@aol.com or at their website: www.thunderonthehillracingseries.com. or contact Steve Pados at: 484-784-7756 or through email at: steveswp@ptd.net