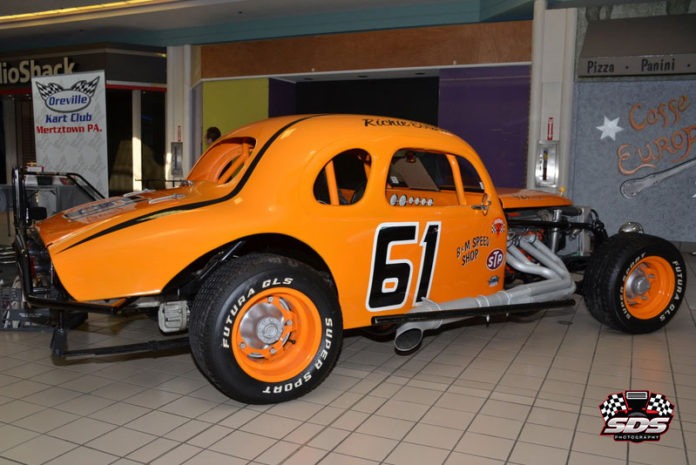 The Quaker Steak and Lube Tenth Annual Dirt Track Heroes Show opened yesterday to much fanfare and enthusiasm as racing fans flocked to the Phillipsburg Mall on Sunday to listen to great racing stories and meet a panel of legendary racing stars who came out to chat about their racing exploits and to honor racers “The Pride of Pen Argyl” Tighe Scott and Lew Boyd. The “Golden Era” of racing came roaring back to life Sunday as the great panel of driving stars talked of their triumphs in racing and more importantly the many friendships they forged through their association with racing. Scott was honored for his solid Modified/NASCAR and Sprint Car career. Boyd, a New Englander, found good success in racing and then pursued his passion for writing and publishing with such books as “Paved Track/Dirt Track” and “I’ll Never Be Last Again” and his very first book “They Called Me The Shoe” and his latest publication “Cages Are For Monkeys.”

The 55 stores making up Quaker Steak & Lube Restaurant chain annually sell more than 80 million wings per year and “The Lube” is recognized as “The best wings in the USA.” The Phillipsburg location has also been dubbed “The Official Restaurant of the Dirt Track Heroes” show. To contact the restaurant, call: 908 454 2900 or check out their website at: www.thelube.com Before or after the show head to Quaker Steak & Lube and get recharged and refueled in a great sports setting. Request a table underneath the Bob Pickell number 300 Modified for an additional racing experience.

With the eclectic Quaker Steak & Lube Restaurants the lead sponsor of the event, the excitement and the pulse for the week long show quickened with each driver being announced by the professional team of Ed and Steve Pados, Bobby Stull and Justin Beltrame. The diverse schedule of the week long show will offer a bit of everything to all racing fans no matter series or division of racing they prefer. The show will honor the legendary Modified talent Sammy Beavers with a special show on Friday, March 10th at 4 PM dubbed the “The Legends of Racing” and a tribute to open wheel racing at the famed Flemington “Square” Speedway will close the show on March 11th at 1 PM with many open wheel racing legends being present for the show.

The 10th annual edition of the show will continue through March 11th with amazing sponsorship support through headline sponsor Quaker Steak and Lube restaurant chain and associate sponsors IRCO Community Federal Credit Union, Premio Foods, Enterprise Car Sales, Huston’s Automotive, Smith Fabrications/Stage One Modifieds, Jeff’s Automotive, Alex’s Tire/Breidingers Speed Shop, Adams Brothers Used Auto Parts, Hamlin Speedway/S&S Speedways, Searock Fabrication and Speed Supplies, R&F International Muffler and Brake, Murante Auto Repair, Pesa Auto Repair, Martocci Automotive, Dean Autosports, Chrin’s Automotive, Carl’s Auto Sales and Ralphs Radiator. Nightly driver interviews and race cars of all types provide the race fan a full appetite of racing fun before the regular racing seasons begins. The Phillipsburg Mall, located on Route 22 East in Phillipsburg, NJ, has proven to be a popular setting for this special event and offers a multitude of race cars, racing memorabilia, collectibles and photos on display throughout the course of the show. The show continues to be free of charge to the mall traffic and the 2017 edition of the show is the trend setter of the many shows that are scheduled during the year.

After many long hours of planning and scheduling, the show kicked off with Emcee Steve Pados announcing a record breaking number of entries into this edition of the show with 161entries into the event. Enterprise Car Sales, Jeff’s Automotive and Huston’s Automotive were the first day event sponsors and Pados graciously thanked all of the sponsors, drivers and fans for their loyalty and support of the show and for their dedication to racing. Pados followed by introducing IRCO Vice President Greg Collins to the crowd. Collins thanked the local racing community for their support and talked about how the show came together ten years ago with the show staff and all are still on board with the show. Event organizer Bob Miller also thanked everyone involved with the show for all of their efforts in putting together a very successful event. Co-Emcee Ed Pados gave an emotional prayer to the many drivers or racing people who have passed on in the last year and the show proceeded with the driver interview session. Representative Sue Gerhardt was on hand as the Dirt Track Heroes event has let their support to the Relay for Life Team through the American Cancer Society.

The great fan base of racing can come out to this grand Mall event and be transported back to a time when they could hop into their family jitney and travel less than a half hour to witness the excitement of a night at the races. All historical racing groups including Reading, Flemington, Harmony through Greg Collins, Tri State, Remembering Nazareth, Bob Snyder Photos and Snyder Video, Mike Ritter Photos, Coastal 181 and Mocatek Memories through Justin Beltrame have their memorabilia on display and their many scrapbooks open for the fans to take another long look at the glory years of racing and possibly find a picture or two they want to purchase as a keepsake from past glory or racing exploits. More information is available regarding the show by calling: 443-513-4456.

On display at the Mall include big and small block Modifieds, Sportsman, Micro-Sprints, Midgets, 360 and 410 Sprints, 305 Sprints, Wingless Sprints, Late Models, go-karts, quarter midgets and a broad variety of vintage and restored race cars and drag racing cars. Hamlin, Snydersville, Mahoning, New Egypt, Grandview, Big Diamond, Bridgeport and Accord, are among the many speedways involved with the 2017 show. The week-long event will set aside one evening to salute the “Stars of Tomorrow” with a special night set aside for the budding young racing talents competing with the many quarter midget clubs in the area and this night has proven to be one of the highlights of the week as many will be giving their first ever interviews to a sizeable crowd.

Monday night will feature a salute to Drag Racing in the local area with the evening sponsored by Alex’s Tire/Breidinger’s Speed Shop located at 102 Commerce Way in Stockertown, PA and Murante’s Auto Repair located at 516 Biel Avenue in Nazareth, PA.