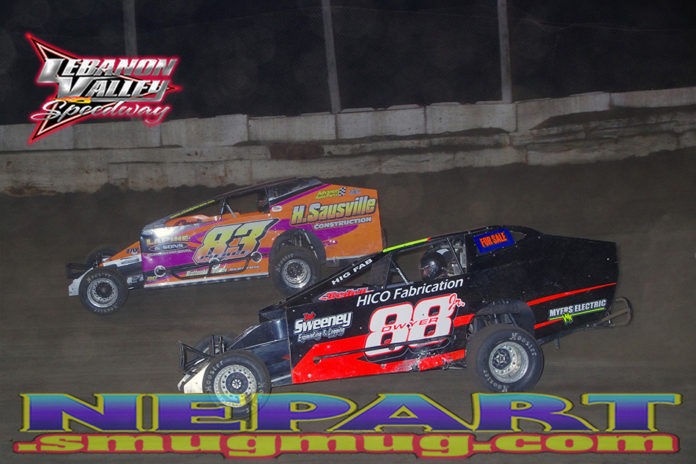 EAGLE BRIDGE, NY – Five years removed from his first ever Lebanon Valley Speedway track championship, Chad Pierce is looking to rekindle the magic on the “High Banks,” and will do so with the addition of a new sponsor.

Walt’s Service Center of Bennington, VT has come on board to help support the team as they chase after the 2017 Small Block Modified Championship at the West Lebanon, NY oval. The automotive repair business offers 24-hour towing and emergency roadside assistance as well as repairs and Vermont State Inspections. They join the team’s list of marketing partners which includes H. Sausville Construction, Battenkill Valley Electric and Cam’s Kitchen.

“Walt and the entire Cross family love racing and have supported many drivers throughout the years,” Pierce said. “Having them find value in being part of our team is great and I can’t thank them enough for coming on board.”

Last year was an up and down season for Chad and the CP Racing Team. The #83 didn’t visit victory lane but did finish in the top 10 in points at the Valley.

“We felt down on horsepower so we are working diligently to address that issue for this season,” Chad said. “Our PMC chassis is in real good shape. We are waiting on the engine to get back from being freshened and still need to get the graphics done. A few other small pieces and we’ll be good to go.”


According to Pierce, the major problem the team faced last season was an inability to be running when the checkered flag flew. That, coupled with a desire to win a feature event, is high on the team’s checklist for ’17.

“Our goal for this season is to try and be more consistent,” Chad said. “I feel as though we should be a top ten car night in and night out. Last season we had a lot of DNF’s (Did Not Finish). If we can fix that, we can show our true potential.”

This season may see Chad venture out on the road some with the newly-formed King of Dirt 358-Modified Series. The seven-race series will travel to several tracks Pierce is familiar with, like Lebanon Valley, Albany-Saratoga and Devil’s Bowl.

“The KOD is something we’re definitely looking into,” he said. We’ll probably have to wait and see how our season goes at first and then decide if we want to hit those shows.”
To stay up-to-date on all things about Chad, the CP Racing Team and their marketing partners, keep an eye out for a redesigned www.chadpierce.net.