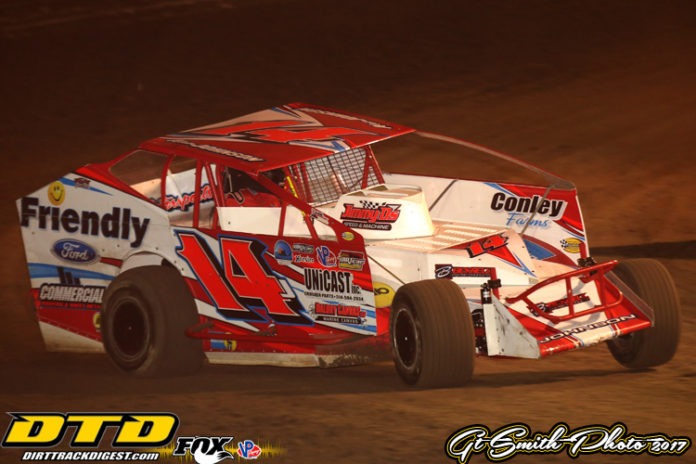 WEDDSPORT, NY – Alan Johnson, DIRT Motorsports’ first homegrown superstar, accomplished Central New York champion Steve Paine and pioneer Pennsylvania fireball Freddy Adam will officially be inducted into the Northeast Dirt Modified Hall of Fame in July. These three driving greats add their names to a stellar list of Modified standouts that was started in 1992 when the Hall of Fame was established on the Cayuga County Fairgrounds in Weedsport, NY.

The 26th annual induction ceremonies honoring the Class of 2017 will take place Monday, July 10 at 7 pm in the Northeast Dirt Modified Hall of Fame and Museum, on the grounds of the renovated Weedsport Speedway. The event is free and open to the public, and will feature pre- and post-program festivities. The following evening, Weedsport Speedway will present its Super DIRTcar Series Hall of Fame 100 for the big-block Modifieds.

There was no fooling around for second-generation racer Alan Johnson: In 1974, at age 16, he climbed right into a big-block Modified, and notched his first career victory at Canandaigua the following spring. That began an unbroken win streak stretching 42 years (and counting) — every single year, since 1975, “A.J. Sideways” has won at least one feature event in a full-blown Mod on dirt. With smooth driving and superlative consistency the Middlesex, NY, racer racked up title after title: five-time Super DIRT Series champion; four-time overall Mr. DIRT Modified titleholder; four-time Mr. DIRT 358 champion and 358 series champ; nine titles at both Weedsport and Rolling Wheels, five at Canandaigua, four at Brewerton, three Mod and two 358 crowns at Ransomville, one big-block and three SBM championships at Fulton, one at Merrittville, and a deuce on the Florida Modified tour. Johnson’s career win list currently stands at 543, with scores at 39 tracks in seven states and two Canadian provinces. Included in that heady total are three Super DIRT Week main events on the Syracuse mile (in 1983, ’89 and ’03), 57 wins on the Super DIRT Series circuit, a quartet of Fulton’s Victoria 200 trophies, and the crown jewel Eastern States 200.

Soft-spoken and unassuming off the speedway, Steve Paine is anything but when he takes the steering wheel. That stormy resolve has earned the racer from Waterloo, NY, a fitting nickname — “The Hurricane” — and a résumé that proves he’s a force to be reckoned with. Thus far in his 33-year career, Paine has taken 312 checkered flags in both big-block and small-block Mods at 26 speedways dotting six states and two Canadian provinces, including 27 wins each in the big-block and 358 Super DIRTcar Series, and 31 track point championships. Paine was named the 1991 DIRT Driver of the Year, 2000 Mr. DIRT Modified champion, and the 358 Mr. DIRT Series titlist in 1999 and 2002. He has claimed more Canandaigua champion titles than anyone else in the track’s history, and has the hardware from high-profile races like the Fonda 200, Bridgeport 200, Ransomville Summer Nationals, Utica-Rome’s New Yorker 200, Autodrome Granby and Rolling Wheels 200s, and the big season-ender at The Dirt Track at Charlotte lined up on his mantel.


“The Kutzown Komet,” Pennsy pioneer Freddy Adam began his racing career in a ’38 Ford coupe at Philadelphia’s Yellow Jacket Speedway in 1950. It would be six years before Adam would smell victory, that win coming at Dorney Park. But once the cigar-smoking racer with the black Wellington boots got that first whiff, he came into his own. The only driver to compete in every Modified season at the old Reading Fairgrounds, Adam is credited with 20 wins on that tough circle, as well as two major wins at the Nazareth National big track, in 1968 and 1970. During a 37-year career of competitive driving, Adam raced on 44 tracks in six states and won four championships — three on Hatfield’s high banks, and the final Modified stock car title at Dorney Park in 1959. But his most famous achievement was winning the last National Open run on dirt at Langhorne, in 1964. There were 212 entries that year, a purse of $20,000+ on the line, and a crowd of 31,000 in the grandstands. Driving Joe Bullock’s #76 Chevy coupe, Adam charged to the lead with just two laps remaining in the crash-marred 100-mile event and held off Kenny Shoemaker and Bill Wimble to claim the $4,000 victory by less than a car length. Adam retired from the stock car scene in 1986. He passed away in 2013.

The 2017 Gene DeWitt Car Owner Award goes to Capital District resident Randy Ross. First a crewman for Kenny Coon, Ross formed a team with Bryan Goewey in 1987, then fielded cars on his own for drivers Matt Quinn, Bobby Wilkins and Kenny Brightbill with moderate success. But when Randy put Billy Decker in his Modified in 1995, sparks flew. That first season, they won a hard-fought championship at Lebanon Valley — and everything exploded after that. In nine years together, Ross and Decker won 70 races, seven track championships, the Mr. DIRT Series title, the Super DIRT Series tour championship, three October big-block classics and a pair of July prelims at Syracuse, a 358 event on the mile, and Orange County’s Eastern States 200, among other big scores. After the dynamite duo split, Ross settled 22-year-old upstart Matt Sheppard in the seat and put him out on tour, launching what is sure to be a Hall of Fame career. In the Ross ride, Sheppard won his first of many Super DIRTcar Series tour events at Autodrome Drummond and swept Hagerstown’s Octoberfest card in 2004; the team took the New Egypt Speedway Modified championship in 2007. Ross retired as a car owner in 2008.

Rich Tobias Jr., recipient of this year’s Mechanic/Engineering Award, is truly a Renaissance Man. The youngest son and namesake of Hall of Fame driver Dick Tobias has done it all: Early on, he built Modifieds in his family’s Lebanon, PA, speed shop. As a driver, he won the 1992 Syracuse classic, the richest Modified race on the planet, and the Ted Horn Memorial at the DuQuoin Fairgrounds mile in a USAC Silver Crown car. As a track manager and promoter, he turned the former Kutztown Speedway into Action Track USA and the hottest weeknight ticket in the region. But it is his out-of-the-box thinking and ingenious ability to construct what is needed, not just what is already there, that earned him Hall of Fame honors. In 1999, Tobias introduced the Slingshot, an affordable spec small car with a Briggs & Stratton engine and Mod-like tin. Nine years later, Rich found another void and filled that niche with the SpeedSTR, basically a strictly-spec Midget. Both classes have taken off like a NASA space launch: There are currently more than 700 Tobias Slingshots throughout the U.S. and Canada, competing at 16 weekly tracks; SpeedSTRs, now sanctioned by USAC, have attracted a “who’s who” of racing, with legends like Ray Evernham, Billy Pauch, Kenny Brightbill, Rick Eckert, Brian Montieth and Frank Cozze strapping in.

Longtime DIRTcar official Gaston Salvas will receive the Leonard J. Sammons Jr. Award for Outstanding Contributions to Auto Racing. Beginning more than 50 years ago as a driver and car owner in his native Quebec, Salvas segued into officiating racing events at Autodrome Drummond, St. Grégoire, NASCAR-sanctioned Sanair and other ovals, becoming an integral player on the Canadian stock car scene. DIRT’s Glenn Donnelly saw Gaston as a mover and shaker, and in 1978 hired him as a part-time official. His duties for DIRT and Donnelly grew over the years (he was essential in putting together DIRT’s 1989-92 pavement series) and in 1990 Salvas was named Northern Vice President of the organization. The next season he added the duties of competition and race director for DIRT’s 358 traveling series. Always, always, the likable French-Canadian extended his hand across the border to expand the sport. The bilingual Salvas was instrumental in helping to establish the dirt Modified in Canada, bridging the language barrier to interpret rules and race calls, and translating the DIRT rulebook into French. DIRTcar’s ever-widening presence in Canada would not have been possible without all of Gaston’s groundwork and dedication.

Journalist and publisher Lenny H. Sammons, Hamilton, NJ, will be the recipient of the Andrew S. Fusco Award for Media Excellence, in memory of Hall of Fame board member and legal counsel Andy Fusco, who passed away in 2015. Sammons was only seven when his parents started the first regional auto racing publication, Area Auto Racing News, in 1963. But even at that young age, he jumped in, gung-ho, hawking newspapers at local tracks, selling novelties, and snapping photos from the grandstands. It was a hands-on education from the ground up: Lenny learned to run the presses, lay out pages, manage the business, be on top of the breaking news, and — most importantly — make that weekly deadline. With his father’s failing health, he took on more and more responsibility, becoming editor in 1977 and publisher and president when his dad finally passed in 1991. Sammons established AARN as a necessary read for every race fan; and as other trade publications folded, he now finds himself the last man standing. All these years later, Lenny still exudes more energy than a nuclear powerplant: ferreting out the most scintillating scoops on the scene, providing scope and perspective nonexistent on Internet blogs, still cranking out 50 issues a year, while producing special racing events and the most successful trade show in the Northeast.

Vicki Emig, RUSH Series director and former promoter at Mercer Raceway Park, will be honored with the Outstanding Woman in Racing Award. The daughter of a race car owner, Emig followed her family throughout Western PA and Eastern OH, chasing racing for 40 years as they won more than 300 feature events between the Semi-Late and Modified divisions. In 1999, Vicki purchased the 3/8 mile Mercer facility, and set about turning the track into a family entertainment center, offering package deals and kid-friendly attractions to spice up the race nights. After 11 years at the helm, Emig sold the speedway and turned her attention to jumpstarting a regional race series for Crate Late Models. That venture became the RUSH Racing Series in 2013, and the organization began sanctioning weekly tracks as well as tour events. Further expansion saw 602 Sportsman Modifieds, Pro Stocks and Pro Mods join the Crate Lates under the RUSH umbrella, and the plan is to add asphalt cars this year and wingless Sprints in 2018. Under Emig and her partner Mike Leone, some 25 speedways in the eastern U.S. and Canada now host RUSH-sanctioned events. Vicki has been nominated for RPM Promoter of the Year, and has been inducted into the Hall of Fame at both the Pittsburgh Circle Track Club and Twin-State Auto Racing Club.