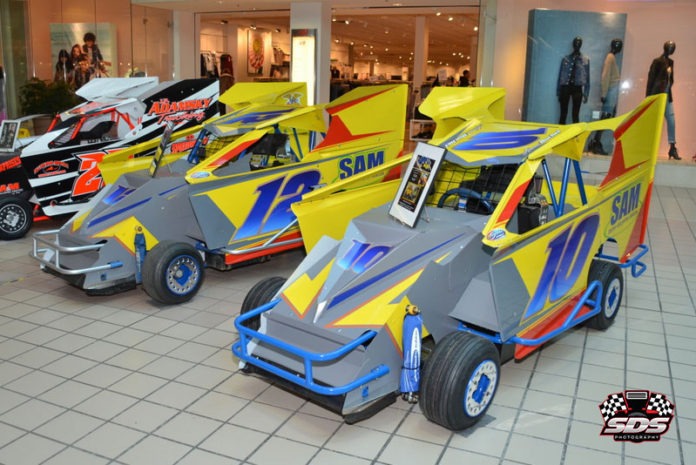 The record breaking Tenth Annual Quaker Steak & Lube Dirt Track Heroes Show continued through the fourth day of the week long journey on Wednesday evening for the racing community and another successful day went into the record books featuring the stars of the Hamlin Speedway, Snydersville Speedway, Oreville Raceway and Mahoning Valley Speedway occupying center stage. After a very successful Tuesday evening show with the “Stars of Tomorrow,” small divisions on dirt and pavement division racing took to the center stage for the Wednesday night show.

At the show, be sure to check out the Enterprise Car Sales display at the stage show room. The closest location for Dirt Track Heroes fans to contact Enterprise Car Sales is 1713 Lehigh Street in Allentown, Pennsylvania. The website is: www.enterprisecarsales.com The company is a service of the Enterprise Rent-A-Car brand, which is owned by Enterprise Holdings Inc. A pioneer in the concept of the haggle-free car-buying experience, Enterprise Car Sales features more than 250 makes and models of high-quality, late model used cars, trucks, vans and SUV’s, most of which have been selected from Enterprise Holdings’ U.S. fleet of more than 1.1 million vehicles. Each vehicle passes a rigorous 109-point inspection conducted by an ASE-certified technician and comes with a seven-day/1,000 mile repurchase policy. A free CARFAX(r) Vehicle History Report(tm)is also available for all certified vehicles.

Nightly interviews and a record number 161 race cars provides the loyal race fans with a full appetite of racing fun before the regular seasons begins. The Phillipsburg Mall, located on Route 22 East in Phillipsburg, NJ, has proven to be a popular setting for this special event and offers a multitude of race cars, racing memorabilia, collectibles and photos on display throughout the course of the show. The show continues to be FREE of charge to the mall traffic and the 2017 edition of the show is the trend setter and showstopper of the many shows that are scheduled during the year. Hamlin Speedway/S&S Speedway Indoor Go Karts and Smith Fabrications/Stage One Modifieds sponsored last evening’s show and have been loyal supporters of the event since the inception of the show in 2008.

With the eclectic Quaker Steak & Lube Restaurants the lead sponsor of the event, the excitement and the pulse for the week long show quickens with each day as the diverse schedule of the week long show offers a bit of everything to all racing fans. The 55 stores making up Quaker Steak & Lube annually sell more than 80 million wings per year and “The Lube” is recognized as “The best wings in the USA.” The Phillipsburg location has also been dubbed “The Official Restaurant of the Dirt Track Heroes” show. To contact the restaurant, call: 908-454-2900 or check out their website at: www.thelube.com Before or after the show head to Quaker Steak & Lube and get recharged and refueled in a great sports setting. Request a table underneath the Bob Pickell number 300 Modified for an additional racing experience.

Smith Fabrication guru, the legendary “Rapid” Richie Smith, highlighted the success of his Stage One Modified race cars and we offer a very happy birthday to him. Driver/Sponsor Bill Dianella announced he has once again signed on to the Stage One Modified race series with his business Hampton RV and Trailer Sales based out of Newton, New Jersey area, for the 2017 racing season and each feature winner will receive a plaque for landing in the winners circle at each event in 2017. Barry Greenzweig, the promoter at Snydersville and Oreville was on hand for the event. Gary and Donna Palmer from Accord Speedway were on hand to talk about the upcoming season at Accord and later surprised Steve Pados with a Dedication Award for his work with the Dirt Track Heroes Show and his continuous promoting of racing throughout the East Coast. Pados also announced JPA Masonry is the new division sponsor for the Rookie 600 Sprints at Hamlin.

Thursday night’s show will include drivers from New Egypt, Bridgeport, Grandview and Big Diamond Speedway and the Excel Modified Racing Series. Looking ahead, Modified stars will be showcased with the Thursday night show. Friday, March 10th, brings two shows to the Mall going back to back with the “Legends of Racing” at 4 PM when Modified legend Sammy Beavers is honored for his great career in racing. Some of Sammy’s competitors will be on hand to talk about fun moments they had when racing with Sammy. Friday evening will find current day open wheel stars being interviewed. The Friday events brings the Premio Sausage Wagon to the Phillipsburg Mall and they will be offering up samples of their great sausage products and offering some great takeaways at the event. Premio Sausages will also be in hand for the Saturday show when Flemington Speedway drivers talk about their open wheel exploits at the famed Flemington “Square” Speedway.

The great fan base of racing can come out to this grand Mall event and be transported back to a time when they could hop into their family jitney and travel less than a half hour to witness the excitement of a night at the races. All historical racing groups including Tri State, Flemington, Harmony through Greg Collins, Reading, Remembering Nazareth, Bob Snyder Photos and Snyder Video, Mike Ritter Photos, Archie Myers with Harmony and Mocatek Memories through Justin Beltrame have their memorabilia on display and their many scrapbooks open for the fans to take another long look at the glory years of racing and possibly find a picture or two they want to purchase as a keepsake from past glory or racing exploits. More information is available regarding the show by calling: 443-513-4456.