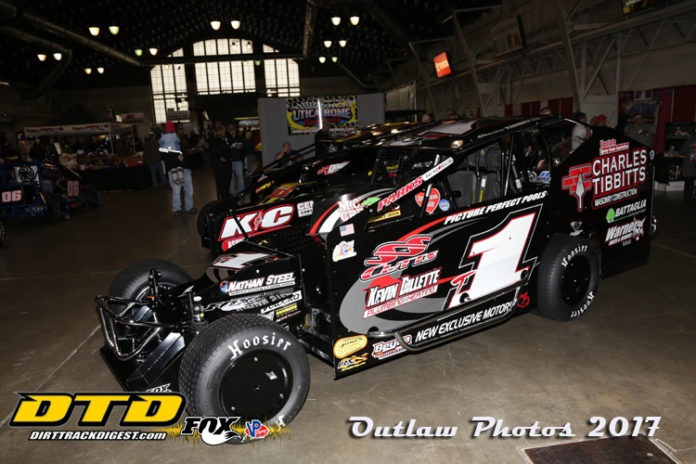 SYRACUSE, NY – For 31 years, the Motorsports Expo show, held in the Center of Progress Building on the New York State Fairgrounds, has served as the unofficial kickoff event for the new racing season in New York State. Through the years, one of the stories of Motorsports Expo has been the whims of the always fickle Central New York weather Gods. This year’s edition of Motorsports Expo saw racers and fans braving bitter cold and intermittent snow showers that made for some difficult travel. The New York State race fans are a hearty bunch, and a great crowd was on hand both days to check out new racing equipment and reunite with racing friends.

There was plenty for those fans to see with well over 200 racing vehicles representing just about every discipline of Motorsports on display as part of Motorsports Expo 2017. From Microds to Modifieds and everything in between, race teams brought some great-looking equipment to Motorsports Expo 2017. The level of craftsmanship and artistry displayed on the various racing vehicles taking part in the show was at an all time high. Plenty of new cars featured all new color and graphics schemes for the upcoming season with many teams drastically upgrading the appearance of their equipment over the winter months.

With the quality of the equipment on display at an all time high, the Terrell Potato Chip Best Appearing Car Award recognizes the best of the best, awarding a handsome trophy to the team selected as Best Appearing by Motorsports Expo judges. Picking up the 2017 Best Appearing Car award was the beautifully restored #44B Modified of Dave Lape which was displayed in the DIRT Motorsports Hall of Fame. Lape himself completed the restoration himself along with longtime friend and supporter Wayne Gaige. The 1977 Tobias Chassis that carried Lape to the 1977 Mr. DIRT title was located behind a garage in Oneonta, NY, basically a bare frame lying in the weeds. Three years and 760 man hours later, the car has undergone a complete restoration and rebuilding by Lape and Gaige and was on display at Motorsports Expo with Dave and wife Jackie Lape meeting race fans stopping by to check out the flawless craftsmanship on the #44B.

Earning the Ferris Mowers Best of Show Award at Motorsports Expo 2017 was the two car display of the Kraig Heroth team. Kraig is one of sport’s true road warriors as he lives in the Capital District of New York but makes the trip weekly to race his asphalt Modified at the Spencer Speedway on Friday nights. Then, on Saturday night, Herouth competes in the Limited Supermodified division at the Oswego Speedway. Running two totally different cars at two different tracks a couple of hours apart on a weekly basis makes for a busy summer for Kraig and his famly owned race team. For Motorsports Expo 2017, Kraig brought both cars and set up an eye-catching display complete with lightinh effects that earned him the Best of Show award for not only high quality cars but an eye-catching display as well.

Pretty much all of the area tracks and sanctioning bodies were represented at Motorsports Expo with schedules cards ready to hand out and representatives on hand to discuss the upcoming season with drivers and fans alike. As they always do, the Empire Super Sprint Series came out in force with a gaggle of cars displayed in their booth as the series kicks off their 34th season. The Patriot Sprint Group also had a good number of cars on hand as well with both Sprint Car groups featuring busy racing schedules in 2017. As always, Utica Rome Speedway had a strong turnout of cars as dis the Skyline Raceway, who had six cars in their booth in preparation for their move to Friday night racing. Also turning out in force was the outlaw Speedway as second year promoter Tyler Siri brought not only his own Modified but the track safety truck and several other cars that will be calling the Dundee, NY speedplant home on Friday night.
A good number of vendors of various types of products were on hand as well to market their products. Vendors from ten different states spent the weekend selling their wares to an eager crowd. Racers and race teams had the opportunity to check out some of the newest and latest equipment for their racing needs while fans had a wide variety of souvenir and collectable vendors to check out.


Motorsports Expo officials would like to thank all of the sponsors that made the 2017 edition of Motorsports Expo possible. Ferris Mowers, Bob Hilbert Sportswear, Mitchell’s Speedway Press, Sunoco Race Fuels, Terrell Potato Chips,, and Leaf Racewear were all recognized for their contribution to Motorsports Expo 2017.

Plans are already in the works for the 2018 edition of Motorsports Expo, whih is slated for the weekend of March 10th and 11th, 2018 . For all of the latest news regarding Motorsports Expo 2018, log onto the Gater Racing News web page at www.gaternews.com.