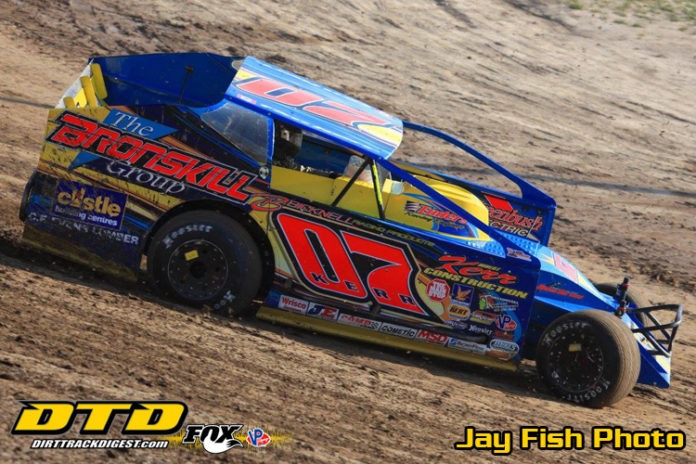 PICTON, ONT – Tim Kerr’s season of Big-Block Modified racing will start later in 2017, but the Picton, Ont. driver believes an extended off-season will be to his benefit.

Kerr, a veteran dirt Big-Block Modified driver who competes weekly at Fulton and Brewerton speedways in New York, did not make his usual trip south to Florida’s Volusia Speedway Park with the Super DIRTcar Series last month. Instead, he chose a more relaxed approach to his off-season which he hopes will help produce better results when racing resumes next month.

“I haven’t been pressured to make sure the car was done [in February], so we’ve been able to dig into some stuff and take some things apart that typically we send away to rebuild,” Kerr said. “It’s been kind of relaxing compared to our normal hustle and bustle of being in Charlotte in mid-November and being back on the road for February.”

Kerr found success in his program throughout the second half of the 2016 season, which included a win at Brewerton Speedway on August 19, and left him confident with his Bicknell Racing Products chassis and Enders Racing Engines package entering the upcoming campaign.

As a result, he and his No.07 team have made few changes for the upcoming season. It’s a “no news is good news” scenario for the No.07 team. Like any driver, Kerr will certainly be tinkering with his setup and hopes to successful testing in April will build early momentum.


“We’re going to keep working on what we were hitting on at the end of the year,” Kerr said. “I’ve got an idea where we can tweak on it and we’re going to try that right off the bat. Hopefully we can hit on something.”

The biggest change for Kerr comes outside of the cockpit. A greater focus on weekly competition at Fulton and Brewerton brings a reduced travel schedule as he seeks to improve on 9th- and 13th-place point finishes, respectively, at the two tracks.

“We want to put a big focus on our weekly program and try to be as strong as we can every week,” Kerr explained.

Like many in the Northeast, Kerr is hoping warmer temperatures and an early spring are on the way in order to hit the track as quickly as possible.

“I’m looking forward to getting back in the rhythm of it,” Kerr said. “It’s something I love, so the winter slowdown is nice, but I’m ready to get back at it and get back in the car.”

KEEP UP WITH KERR