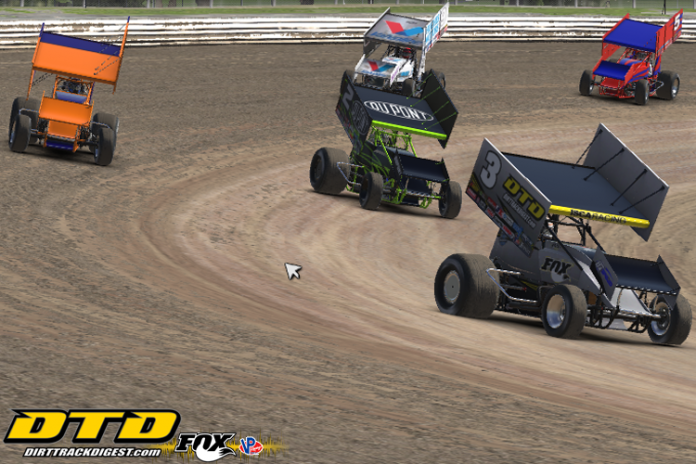 By WORLD OF OUTLAWS PR
CONCORD, NC – Monday nights just got a little more exciting. World of Outlaws Craftsman® Sprint Car Series fans will now be able to enjoy LIVE iRacing.com events streamed on DIRTVision.com every Monday night at 8:30 EST.
The best of the best dirt sim racers from around the world will compete on iRacing’s life-like dirt tracks on Monday night, ultimately duking it out for bragging rights and notoriety. It’s not uncommon to see the likes of full-time Outlaw drivers such as Shane Stewart join a race on iRacing.com. World of Outlaws event winners, Brian Brown, Rico Abreu, Kyle Larson (just to name a few) have also tested their skills on virtual dirt racing.
After the release of dirt on iRacing.com, Kyle Larson tweeted, “Finally got to spend a night on @iRacing in the sprint cars. Blown away by how close to real they drive…The coolest part I think about it is how real the track surface changing is. Absolutely blown away. @iRacing did a great job.”
On Monday, April 17, the iRacing World of Outlaws Craftsman Sprint Car Series was broadcast live on DIRTVision for the first time. It was Logan Seavey of Sutter, CA that held off a late-race charge from Illinois-based sim racer, Mike McKinney for a trip to Victory Lane at Volusia Speedway Park. Both Seavey and McKinney engage in real-world racing outside of iRacing.com; Seavey races a Midget and a Sprint Car, while McKinney races a DIRTcar UMP modified.
A different track will be featured each week, starting with Volusia Speedway Park, home of the DIRTcar Nationals in February; the famous Williams Grove in Pennsylvania; the high-banked, high-speed Eldora Speedway in Rossburg, Ohio; and USA International Speedway (a fictional dirt version of the track).
Any iRacing.com subscribers are eligible to test their skills on dirt surfaces and build up their ratings, with a chance to be featured live on Monday’s broadcasts, which will feature the best of the best to show the rest of us “how it’s done.”
Monday’s iRacing World of Outlaws Craftsman Sprint Car Series event will feature Williams Grove Speedway. Be sure to check out all the sim racing action Live on DIRTVision on Monday, April 24 at 8:30 pm EST.
iRacing.com World of Outlaws Craftsman Sprint Car Series Broadcast Schedule:
April 24th: Williams Grove Speedway
May 1st: Eldora Speedway
May 8th: USA International Speedway (a fictional dirt version of the track)
May 15th: Volusia Speedway Park
May 22nd: Williams Grove Speedway
May 29th: Eldora Speedway
To take advantage of special iRacing offers visit iRacing.com/WorldofOutlaws. Get over 50% off on a 1-year subscription using promo code PR-Outlaws, or a 3-month subscription for just $4.78 using promo code PR-HotLaps!