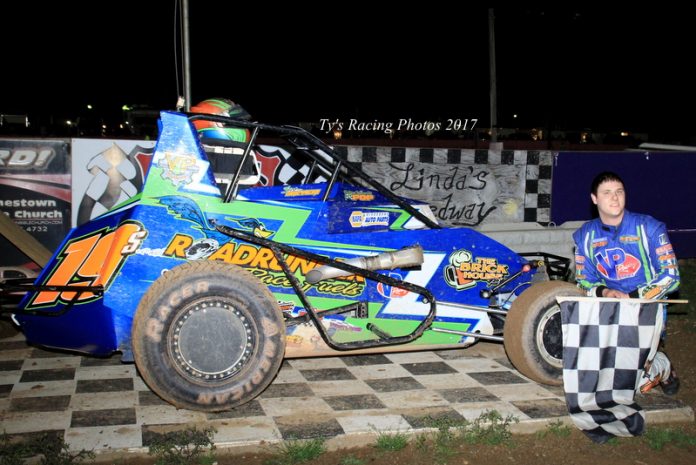 Jonestown, PA –  Last season, in his first year of USAC All Pro SpeedSTR competition, Steve Drevicki served notice that he would be among the top contenders each time his RoadRunner Race Fuels/ VP Race Fuels No. 19s took the green flag. On Friday night at Linda’s Speedway, in the first Action Track Takeover Night of the new campaign, Drevicki became the year’s first winner of a SpeedSTR main event.

The Reading driver, who notched one triumph at Action Track USA in Kutztown during the 2016 season, moved past Jeff Hartman to snare the runner-up position on lap three as polesitter Doug Manmiller set the pace in the early going. Briggs Danner followed Drevicki by Hartman, and the top four ran in almost nose-to-tail formation for the next three circuits.

Drevicki found the opening he needed as he and Manmiller negotiated turn two on the sixth trip around the ultra-fast, super smooth quarter-mile. He ducked under Manmiller’s No. 00 as they exited the corner, then finally completed the pass as the duo throttled off the fourth corner and onto the homestretch.

Defending National SpeedSTR Champion and a four-time winner at Linda’s in 2016, Tim Buckwalter, slipped back a couple of spots during the early laps, running fifth for much of the first half of the 30-lap event.


A red flag for a flipping Tom Mayberry, with 12 tours complete, brought a temporary halt to the fast and furious competition throughout the pack. Mayberry was not injured.

When the action resumed, Tyler Ross, making his SpeedSTR debut, broke into the top five and, in the process, dropped Buckwalter to sixth.

Another red flag occurred when Ohio’s Matt Westfall, taking his first ride in a SpeedSTR, pounded the backstretch wall with nine to go. Westfall was unhurt in the incident.

On the restart, the red flew once again as TJ Mayberry, in the middle of a solid top-ten effort, got some major air time as he barrel rolled in turn two.

When the race went back to green, still with 21 revolutions in the books, Manmiller powered around the top side of Drevicki and reclaimed the lead as Drevicki’s car twitched a bit as he mashed the accelerator off corner number four.

“I’m not sure what happened on that restart,” said Drevicki afterward. “I may have gotten hooked from behind, or maybe the tires sealed over under the red…I’m not sure, but we weren’t as good on the restarts after that.”

This restart proved beneficial to Buckwalter, too, as the Pottstown, Pa. charger sliced his way back to into fourth position.

The caution appeared one lap later, with 22 circuits now scored, and the next restart changed the entire complexion of the race.

Drevicki darted back in front of Manmiller to once again snatch the top spot, then Manmiller’s mount suddenly slowed and headed for the pit exit in turn two.

“I don’t know what happened to Doug, but it was a shame for him; he was really good tonight. I was just ready to be aggressive on that restart. With these cars, you’ve got to be aggressive and up on the wheel at all times.”

As Manmiller departed and they roared down the backstretch, Danner and Ross tangled while fighting for second and both cars spun. Buckwalter appeared to catch a piece of that incident and he also headed for the pits under the ensuing caution period.

The running order now had Drevicki in front with Jeff Hartman holding down the runner-up slot and Dylan Hoch up to third. Mike Bednar, a one-time Linda’s victor last season, also made his first appearance of the night inside the top five.

With five to go, Hoch’s No. 35 pulled up lame and he drove through the pit exit gate, handing third to Bednar. Danner came storming from the back of the pack, challenging for a top five spot as the laps wound down, but he got completely sideways in three and four on lap 27, falling back several positions as he detoured through part of the infield.

At the finish, it was Drevicki by 1.362-seconds over Jeff Hartman, whose car would not pass post-race tech inspection, resulting in a DQ for the Jersey driver. That moved Bednar to second in the final rundown, with Steven Nederostek rallying late for what became a third place finish. Tim Iulg and Matt Janisch completed the top five.

Buckwalter had the quickest lap in the Timed Dashes, with Manmiller second fastest. Both drivers earned automatic transfers to the main event.

Former Linda’s Speedway announcer, the late Steve Buch, fondly referred to the 600cc Sprints as “the heavy honkers”, and on Friday night, four of the “heaviest honkers” in the division took the green in the first four starting positions in the Hyper Racing Wingless 600 main event.

James Morris, Tommy Kunsman Jr., Tim Buckwalter, and Steve Whary lined up in the first two rows and, when Mike Fry waved the green to begin the 25-lapper, Morris, Kunsman, and Buckwalter immediately went three-wide for the lead. Kunsman came away with the top spot and from that point on, the race was his to win…and that’s exactly what he did.

The Bethlehem, Pa. wheel-twister triumphed a week earlier at Linda’s with the wings on the 600’s, and he made it two straight on Friday – this time sans wing.

Buckwalter occupied the runner-up position briefly, but dropped out on the ninth trip around the oval. Morris made a valiant effort to stay with Kunsman on the five restarts that dotted the race, but “TK” was simply too strong and motored away each time the green reappeared.

Mike Rutherford, Brandon Azzalina, 22nd starter Damon Paul, and Robbie Hocker battled with Morris and one another for positions two through six before finishing in that order behind Kunsman and Morris.

Friday’s Action Track Takeover event was a big one for the All Star Slingshots as they competed in their first National Tour race of the season. Along with National Tour points, the race also awarded Mid-Atlantic Regional points, and a banner field of 28 Slingers signed in for competition.

There may be 52 cards in a deck, but this night belonged to the “Ace of Spayds”, as in Seth Spayd from Shillington, Pa.

Spayd started inside the second row and went from third to first on the opening tour of the 25-lap Slingshot main. Once in front, he had to hold off not just one, but two National Slingshot Champions in Dylan Hoch and Brett Bieber, as both of those drivers entered the picture on lap eight. Spayd’s Daryl Tillman Team REMAX of Reading No. 10s was up to the task, though, as he separated himself from Hoch and Bieber and set sail out front.

Three yellows within the final ten tours slowed the pace, but Spayd held serve on each restart and went on to win by almost one second over Bieber, who took the runner-up spot from Hoch with three to go. Hoch’s car then gave up with two laps remaining, bringing out the final caution flag.

Spayd cruised under the checkered, safely ahead of Bieber, while Dave Carraghan just nipped Tyler Peet for third in a photo finish. Lindsey Garl ran a strong and steady race to claim fifth place money.

Some of the closest, most intense racing of the night took place in the winged 270cc Sprint feature, with the victory going to Logan Diehl, who celebrated his birthday just a few days prior to the race at Linda’s.

The early laps had everyone holding their collective breath as 2016 track champion Devin Harron held a narrow lead over Josh Stoyer. The pair set a blazing pace and soon found themselves zipping in and out of lapped traffic while racing one another for the top spot. Stoyer, unfortunately, dropped out at the halfway point of the 25-lapper and then, on a restart with 14 circuits scored, Harron’s mount did not take off and he fell out as well.

Logan Diehl inherited the lead at that point but Tommy Kunsman, who was gunning for his second feature win of the evening, made life miserable for Diehl as he relentlessly hounded the No. 94D. Kunsman threw a slider at Diehl on a restart with eight to go, but Diehl was ready. He made the cross-over move as Kunsman slid up in front of him and went back in front as they gassed their cars off turn two.

That was Kunsman’s best effort at stealing the top spot, and Diehl went on to win by slightly more than a quarter-second over Kunsman, Mason Peters, Scott Gingrich, and Mike Boyer.

The next Action Track Takeover NIght at Linda’s Speedway is scheduled for Friday, June 9.