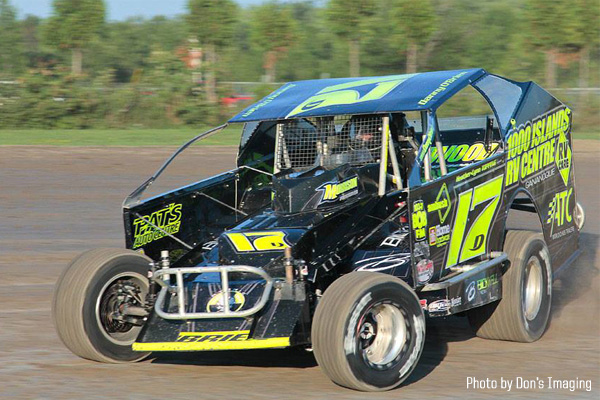 While Brockville’s season won start until Saturday, May 13, O’Brien will begin his season one week earlier with a doubleheader at Mohawk International Raceway in Hogansburg, NY on May 5 and a stop at Can-Am Motorsports Park in Lafargeville, NY on May 6. O’Brien is both prepared and excited for the new campaign to begin.

“It’s just fun to get back to the track again,” O’Brien said. “You see you all the friends you didn’t see all winter long and a bunch of different people. It gets your year started again.”

O’Brien was strong all season long in 2016 at Brockville and on the road. He earned 13 top-five finishes in 14 starts at Brockville last year, part of a larger 17-race streak of top-five results. Duplicating that level of success will be tough for the driver of the 1000 Islands RV Centre No.17d. O’Brien hopes not only to replicate the feat, but improve upon it.

“You always set goals for yourself,” O’Brien said. “The top-five thing was going great last year for a long time and you always try to better yourself. We do that every year.”


Over the course of a five-month season, its easy for a driver to focus too heavily on the point standings. O’Brien, however, pays no attention.

“We’re just going to go race by race,” he said. “I find if you do that, look after the race that’s coming up first and do the best you can then move on to the next one, (the points will) take care of themselves.”

O’Brien and his team have assembled a pair of identical Bicknell Racing Products with Pat Morrison Engines cars once again for the 2017 season. With two cars in the stable, O’Brien will be able to place a greater emphasis on winning.

“Hopefully we have enough equipment that if we race on a Friday night, we don’t have to be super careful,” O’Brien said. “It was always tough when they drop the green on a Friday night race because I had to think ahead to Saturday. We’re going to have a spare car sitting here so if we get in trouble, we’ll have a backup.”

Currently, O’Brien is scheduled to compete in more than 30 races in 2017, a number that will undoubtedly be affected by rainouts. Each race brings something new, but O’Brien is undoubtedly most excited for Cornwall’s $10,000-to-win 358 Modified race on August 17.

“Whenever you get a good paying race in your backyard, it’s nice,” O’Brien commented. “It’s tough to go into someone else’s backyard and race them. On the other hand, I don’t race Cornwall weekly and I haven’t for quite a while, so we may have to make a run down there early just to get one race in beforehand.”