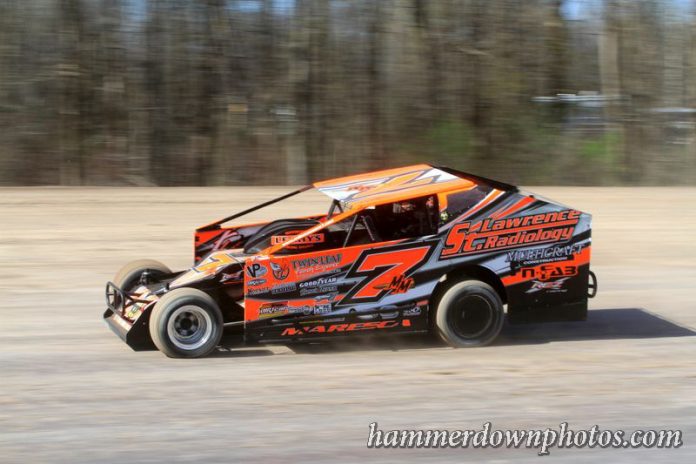 HANNAWA FALLS, NY – A moment over two years in the making is finally on the horizon for Mike Maresca. The Hannawa Falls, NY native will make his first Super DIRTcar Series start as a full-time platinum driver at the season-opening Highbank Holdup 100 at Fulton Speedway on Saturday night.

Maresca, a Clarkson University Financial Information and Analysis senior, has been building towards his rookie season on the premier Big-Block Modified touring series after advancing through DIRTcar’s Sportsman and 358 Modified divisions in recent years. Maresca tested over the course of the off-season to improve his operation including a trip to the DIRTcar Nationals at Florida’s Volusia Speedway Park.

“It definitely helped a lot,” Maresca said of his trip to Florida. “We got to shake down our new program and see where the bugs were and come back home and fix them before the point chase heats up.”

Maresca will pilot a new Teo Pro chassis powered by Leahy Engines in his first full foray into Big-Block racing. After a successful part-time schedule on the tour last year, Maresca and his Rez X Racing team decided it was time to make the jump.

“We ran a lot of the races last year and towards the end of the year we had a lot of good finishes,” Maresca said. “It’s the premier touring series and that’s where we want to be.”


Maresca already has four starts to his credit this year – a pair at Volusia in February and one each at Fonda and Utica-Rome speedways last weekend. Maresca suffered a tough flip on Sunday at Utica, but that has not dampened his spirits for the series opener.

“I’m really excited for this weekend at Fulton,” Maresca said. “The whole crew has put a lot of work into the car. We had a nasty flip Sunday (at Utica-Rome) and it didn’t faze my guys at all. We’re looking forward to getting down there and getting a good finish to get the season started off on a pretty good foot.”

Outside of series competition, Maresca will compete weekly in 358 Modified competition at Mohawk International Raceway in Hogansburg, NY and in Big-Block action at Fonda Speedway in Fonda, NY. Sundays will be open for special events. Staying up to speed amongst the busy schedule figures to be Maresca’s biggest challenge, he said.

With a talent-laden roster of series regulars, Maresca believes racing with the Super DIRTcar Series will help him improve all-around as a driver.

“I think it will make a big difference,” Maresca said. “When you race with the best and you surround yourself with those people, you just kind of adapt and you learn how they work and what they’re doing (to succeed). You’re kind of like a sponge.”

At season’s end, Maresca will have raced close to 80 times. It’s a rigorous schedule, but Maresca already has several dates circled on his calendar as motivation. Maresca isn’t planning to get too wrapped in the results, but does have goals in mind.

“My goal is to get solid finishes. I really want to focus on time trialing really well, running well in each heat races and trying to make the redraw every weekend,” he said. “I think a few wins on local nights on weekends and a string of good finishes with some consistency and a lot of learning on the tour is what I’d consider a success.”

Fans can keep up with Mike Maresca all season long on his new website at www.mikemaresca7.com, which will be launched in the coming weeks. Up to the minute team news is available by following @mikemaresca7 on Twitter.