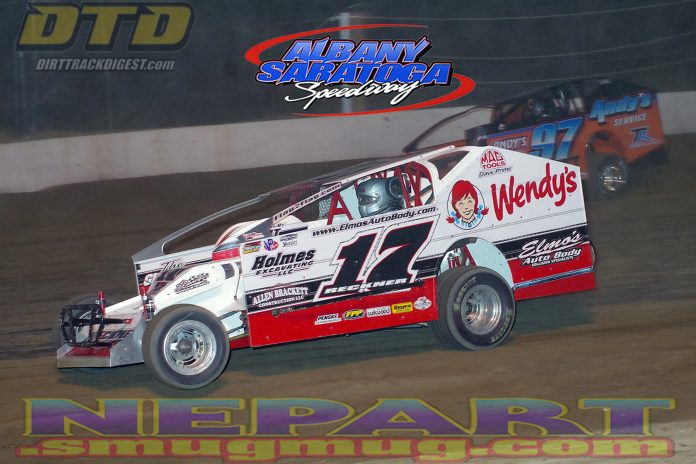 Peter Britten is pleased with his results from Friday night’s opener at Albany-Saratoga Speedway with his new No. 97 Big-Block Modified team.

Britten started the night off deep in his heat race. He drove his way through to fourth from his eleventh starting spot to put himself in the feature.

Britten rolled off twelfth for the main event. “I was good for the first half of the race,” Britten noted. “I don’t think we siped the tires aggressively enough so I think the tires started to seal up a bit which kind of killed my progress.”

“I think we might have been a little bit off set-up wise too,” Britten said. “So really, fifth place was about as far as we could go.”


Despite some setbacks, Britten is feeling confident with his new team. “Overall, a new car and new team, everything went pretty well. We all walked away pretty happy. It was a good first run with the Romano’s.”

The weekend concluded on Saturday when Britten competed at Fulton Speedway for the first Super DIRTcar Series point’s race.

Britten placed fourth in his heat race, which locked him into the 13th starting position for the 100-lap main event.

Britten closed the feature out with a fifteenth place finish. He wasn’t pleased with their results but is still optimistic.

“You’re going to have races like that but at least we finished and didn’t wreck anything,” he said. “We can move on to the next series race and hope for a better run.”

Britten’s next race will be at Albany-Saratoga Speedway on Friday, May 5th.

UP NEXT –
Friday, May 5 – Albany-Saratoga Speedway

APPAREL –
All Peter Britten Racing apparel will be available for sale at their racecar trailer during events they compete in.

SPONSOR SPOTLIGHT – Andy’s Speed Shop
“Andy’s Speed is the main speed shop up there,” Britten mentioned. “The reason why they’re so popular is because they have everything on the shelf, all the time. It’s kind of rare to be able to walk into a speed shop and be a total one-stop shop for everything from tires to Bicknell parts, Troyer parts, radiators… it’s pretty amazing.” Andy’s Speed Shop is located in Johnstown, N.Y. For more information, visit www.andys-speedshop.com.