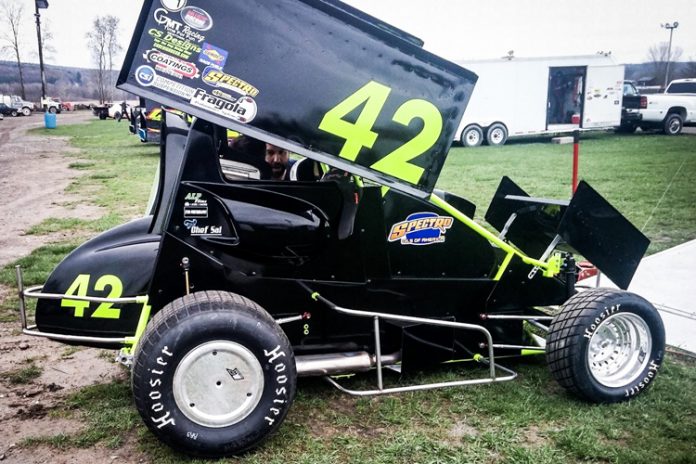 2017 kicks off at the Great Race Place in Malta, NY for Jesse Pruchnik and his Spectro Oils #42 Empire Lightning Sprint team. The family operated team will make the tow from their shop in New Milford, CT to finally put the car and driver on the racing surface in competition for the ELS Opening Night after practice sessions and a long winter of preparing the car.
Jesse finished the season 4th in the Empire Lightning Sprints championship points, and was awarded the series’ Rookie of the Year title. It was an exciting 2016 for the entire team, and they are heading into 2017 with realistic optimism of the possibilities that lay ahead in 2017.
Jesse was excited to be back in his Lightning Sprint Car when he practiced at Albany Saratoga Speedway, and the night went well for him.

“All night we were fast, and after a few changes by my Dad and Uncle Denis the car felt amazing” Pruchnik said. ” It did take some getting used to driving a brand new car, the seat time was much needed, but I feel like the changes were spot on and we are ready to race there in 3 weeks!”

The next practice for the Jesse J Racing team was at Afton Motorsports Park where the 42 team was again pleased with the results.

“The car was absolutely amazing” Jesse said. “We were a consistently a half second faster the last year, and with every practice I was going higher and higher on the track bouncing it off the cushion and we still were extremely fast!


Opening night for Jesse and his team is this Friday at Albany-Saratoga Speedway, and he is excited to get the 2017 season started, for many reasons.

“I can’t wait to see how the car is, and I am excited to see our competition. After many changes in the winter, and in our practices I think we are prepared for what awaits us in the 2017 season.”

Jesse recently added Newtown Pools LLC to a group of marketing partners he is very proud to receive such great support from.