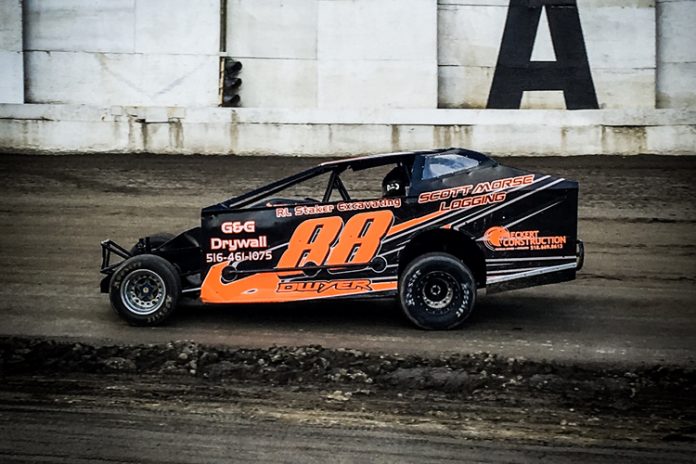 While tracks across the north east were raining out all weekend, Lebanon Valley Speedway was open for business Saturday night. The clouds were ominous all evening, but it would be a lighting issue in turns 2 and 4 at the valley of speed that would force the cancellation of most of the night’s features.

Before the technical glitch ended the racing action prematurely Bennington Vermont’s Olden Dwyer was able to take home the win in the Small Block Modified feature leading from start to finish in his #88 Hig Fab Chassis”.

After winning his heat race Dwyer started on the outside Lebanon Pole and lead the field at a blistering pace.

“Starting on the front row was great because we had a fast race car, and it allowed us to try to run away and hide.” Dwyer said.


Olden did just that, throughout the race the 88 was checked out on the field, until reigning Small Block Champion Kenny Tremont made his way through the field and was looking to give Dwyer a challenge. Tremont never closed in on the 88 enough to stop Dwyer from taking the checkers, his first of 2017.

“The car was really good, and that really helped my confidence in driving it. I just can’t thank all my guys enough for giving me such a fast race car.”

Olden’s Big Block Modified was a casualty of Lebanon Valley’s lightning issues, but in he started 5th in his heat race. Dwyer was collected in a wreck between turns 1 and 2 causing right side damage to the Teo Pro Car. Olden finished 7 in the Big Block heat.

The 88 team will be back in action Saturday May 13th running their Small Block Modified, and it will be double features for their Big Block Modified program.